The full spectrum of electromagnetic energy including visible light from the sun. When solar radiation strikes a solid surface or a transparent medium such as air or glass, some of the energy is absorbed and converted into heat energy, some is reflected, and some is transmitted. All three of these effects are important for effective passive solar design.
Illustrated Dictionary of Architecture Copyright © 2012, 2002, 1998 by The McGraw-Hill Companies, Inc. All rights reserved
The following article is from The Great Soviet Encyclopedia (1979). It might be outdated or ideologically biased.

the electromagnetic and corpuscular radiation emitted by the sun. Solar radiation is the principal source of energy for most processes that occur on the earth.

The corpuscular emissions of the sun consist primarily of protons, which have speeds of 300–1,500 km/sec near the earth. The proton concentration in the vicinity of the earth is 5–80 ions/cm3, but it increases with increasing solar activity and after large flares can reach 103 ions/cm3. During solar flares, particles with energies of 5 × 107 to 2 × 10’° electron volts are produced. Mainly protons, these energetic particles form the solar component of cosmic rays and partially account for the variations in the cosmic rays that reach the earth. 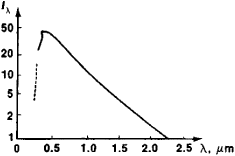 Figure 1. Dependence of radiated energy lx on wavelength λ for the center of the solar disk; the unit of intensity is 10” ergs/(cm!-sec-steradian)

The bulk of the electromagnetic radiation emitted by the sun is in the visible part of the spectrum (Figure 1). What is known as the solar constant is the amount of radiant energy received from the sun in 1 min on a surface 1 cm2 in area perpendicular to the sun’s rays and located outside the earth’s atmosphere at the earth’s mean distance from the sun. The solar constant is equal to 1.95 calories/(cm2-min) and corresponds to a flux of 1.36 x 106ergs/(cm2-sec). The emission of solar radiation is believed to increase at times of maximum solar activity. If, however, this increase does occur, it does not exceed a fraction of 1 percent.

The radio-frequency radiation emitted by the sun, or solar radio emission, is transmitted incompletely through the earth’s atmosphere, since in the radio-frequency range the atmosphere is transparent only for wavelengths of a few millimeters to several meters. Solar radio emission is rather weak. It is measured in units of Ф = 10”22 watts/(m2-sec-hertz) and varies from a few <t> to tens and hundreds of thousands of Ф as we move from the meter band, where frequencies are of the order of 108 hertz, to the millimeter band, where frequencies are of the order of 10” hertz. For a terrestrial observer, however, the sun, because of its relatively small distance from the earth, is the most powerful source of cosmic radio-frequency radiation. Solar radio emission consists of the thermal radio emission of the outer layers of the atmosphere of the quiet sun, a slowly varying component associated with sunspots and faculae, and sporadic radio emissions associated with solar activity. The sporadic radio-frequency radiation is often polarized, is more intense than the thermal emission, and varies rather rapidly. It includes noise storms and bursts. Bursts can be classified into five types, which differ both in frequency composition and in the character of the time dependence of the variations in intensity. Most bursts accompany solar flares.

The short-wavelength radiation of the sun is completely absorbed by the earth’s atmosphere. Information on such radiation has been obtained by means of equipment carried by geophysical rockets, artificial earth satellites, and space probes. The intensity of the continuouso solar spectrum decreases abruptly at about 2,085 angstroms (A). The Fraunhofer lines vanish in the vicinity of 1,550 A. Although the= continuous spectrum can be traced to 1,000 A, beyond 1,500 A the spectrum consists principally of emission lines, such as the lines of hydrogen, ionized helium, and multiply ionized carbon, oxygen, and magnesium atoms. There are more than 200 emission lines in the ultraviolet region; the strongest is the resonance line of hydrogen (L0) with a wavelength of 1,216 A. At the earth’s orbit, the flux of short-wavelength radiation from the entire solar disk is 3–6 ergs/(cm2-sec).

Solar X-radiation (wavelengths from 100 to 1 A) consists of continuous radiation and line emissions. The intensity of the X-radiation is strongly dependent on solar activity and varies from 0.13 erg/(cm2-sec) to 1 erg/(cm2-sec) at the earth’s orbit. The X-ray spectrum becomes harder in years of maximum solar activity. During solar flares, the intensity of solar X-radiation is increased by a factor of several tens, and its hardness also increases. Although the ultraviolet radiation and X-radiation from the sun carry comparatively little energy—less than 15 ergs/(cm2-sec) near the earth’s orbit—such radiation has a very strong influence on the state of the upper layers of the earth’s atmosphere. Solar gamma radiation has also been detected, but it remains insufficiently studied.

Feedback
Flashcards & Bookmarks ?
Please log in or register to use Flashcards and Bookmarks. You can also log in with
Flashcards ?
My bookmarks ?
+ Add current page to bookmarks
Mentioned in ?
References in periodicals archive ?
After calculating spatial distributions of species, the generation mechanism of OH radical in the solar radiation zone is observed.
Computational Fluid Dynamics (CFD) Modeling Indoor Chemical Reactions under Varied Lighting and HVAC Operation Conditions
Qeeer's solar radiation measurement and modelling facilities will make high-quality and valuable solar resource information available to help reduce economic and financial risks and ensure the introduction of cost-effective solar energy power systems."
Qeeri to launch 13 solar radiation monitoring stations
To determine the transmissivity of solar radiation, incident global radiation was measured throughout the production cycle of soybean with a pyranometer coupled to a datalogger (LICOR 1400), measuring from 10:00 am until 12:00 noon.
Agroforestry systems and their effects on the dynamics of solar radiation and soybean yield
The intensity of solar energy from an incoming light that falls on a perpendicular plane can be derived from total solar radiation and the area of the imagined sphere.
The Relation of Meteorological Elements with AOD for Building Energy Consumption
where S represents the absorbed solar radiation by the absorber metal and [h.sub.c,ap-c] and [h.sub.r,ap-c] represent convection and radiation heat transfer coefficients between the absorber plate and glass cover, respectively, [h.sub.r,ap-j], represents radiation heat transfer coefficient between the absorbing and jet plates, and [h.sub.cjap-a2] represents convection heat transfer coefficient of the fluid on the absorbing plate.
Parametric Study on the Thermal Performance and Optimal Design Elements of Solar Air Heater Enhanced with Jet Impingement on a Corrugated Absorber Plate
Removing redundancy from shading device achieved more admission of daylight and increased admission of solar radiation. Thus, value judgment should be made about this fact.
HEAT TRANSFER ANALYSIS OF VERTICAL SHADING DEVICE IN OFFICE BUILDING IN MALAYSIA USING COMPUTER SIMULATION
(4), whereas highest daily average solar radiation of 587 W/[m.sup.2] was recorded on Jun 8th.
Measurements of wind and solar energies in Najaf, Iraq
The incoming solar radiation that reaches the sewage plume depends on the following factors as follows:
Ocean outfalls as an alternative to minimizing risks to human and environmental health
Thus, forecasting solar renewable energy requires more than forecasting the amount of direct and diffuse solar radiation reaching the detector.
SOLAR RENEWABLE ENERGY: The Important and Challenging Role for Meteorology
In order to study the influence of the heated pavement on the near-surface air temperature, the specimens were heated by exposing under the solar radiation from 9:00 to 15:15, and then the near-surface air temperature was investigated using five temperature sensors that were settled at the heights of 25 cm, 50 cm, 75 cm, 100 cm, and 130 cm from the surface of specimen.
Temperature Characteristics of Porous Portland Cement Concrete during the Hot Summer Session
In the current study, we focused on observational evidence of a phenomenon of short-term (~1 hour) water heating in the uppermost layer of the Dead Sea after a sharp drop in solar radiation under weak winds.
Observations of Unexpected Short-Term Heating in the Uppermost Layer of the Dead Sea after a Sharp Decrease in Solar Radiation
Therefore, the solar radiation is stronger and the annual average sunshine time is 3005 h, with the total solar radiation of 8160 MJ/[m.sup.2].
A Field Study on the Indoor Thermal Environment of the Airport Terminal in Tibet Plateau in Winter