the branch of genetics that studies cultivated somatic cells of mammals (including man), amphibians, fish, insects, and higher plants.

The study of the genetics of somatic cells developed as an independent field in the mid-1960’s, largely as a result of the application of many of the methods used in microorganism genetics; these methods include the production of offspring from a single cell in culture, the selection of cells with a specific hereditary structure by means of selective nutrient media, the hybridization of cells, and the analysis of hybrids. The high resolving power of genetic experiments using somatic cells is determined by the rapid reproduction of somatic cells in a culture (the number of cultivated mammalian cells may double in only 12–14 hours) and the possibility of recording rare (with frequencies of 10–7–10–8) genetic events, including mutations and the formation of hybrids. Such a high resolving power cannot be achieved in studies done at the level of the integral organism.

Today, the areas most intensively studied in the genetics of somatic cells are the characteristics of the mutation process, the mapping of genes in chromosomes and especially the mapping of human chromosomes, and the action and regulation of genes.

Natural and artificial mutagenesis in somatic-cell cultures was first studied in the early 1960’s, and the ability of various external factors to induce cell mutations was demonstrated in 1968. These developments contributed to the clarification of the molecular basis of mutagenesis, to the study of the relationship between the mutagenicity and carcinogenicity of various substances and viruses, and to the evaluation of the danger posed by chemical and physical agents to human heredity.

One of the achievements of the genetics of mammalian somatic cells has been the production of hybrid cells by the fusion of two or more heterogeneous cells. These hybrid cells may combine the genomes of taxonomically distant species, for example, of man and various rodent species, mice and chickens, and even man and mosquitoes. Special techniques to obtain hybrid cells include the treatment of cells with inactivated Sendai virus to increase the likelihood of their fusion and the use of selective mediums on which parent cells die and only hybrids survive and form colonies (Figure 1).

Two species of somatic hybrids obtained from human and mouse cells and from human and Chinese-hamster cells are used to localize human genes on chromosomes. The principle underlying the mapping is the fact that human chromosomes disappear in the course of the reproduction of hybrid cells. This disappearance is random, and therefore different human chromosomes remain in each hybrid clone. In hybrids, comparison of the peculiarities of human cells with the surviving human chromosomes makes it possible to establish which chromosome contains the gene determining the particular characteristic. In the 1960’s and 1970’s enough genes were localized to permit the marking of almost all human chromosomes. 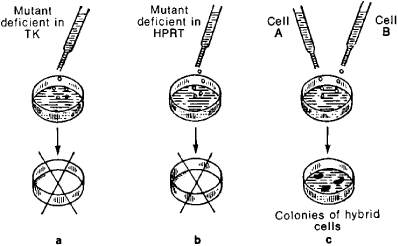 Figure 1. A method of isolating somatic hybrids using a selective medium on which the only cells that can be cultivated are those capable of producing the enzymes thymidine kinase (TK) and hypoxan-thine-guamne phosphoribosyl transferase (HPRT). If as a result of mutation the cells of one parent do not produce one enzyme and the cells of the other parent do not produce the other enzyme, both species of parental cells will die and only the hybrid cells that produce both enzymes will survive and reproduce.

Mammalian cells are also hybridized to study the action of genes. Specifically, it has been shown that mammalian genomes contain regulatory genes that control the action of structural genes. Thus, the study of the genetics of mammalian somatic cells has proved to be a fruitful approach both in the analysis of theoretical questions and in the resolution of many practical matters, including the diagnosis of hereditary diseases, the evaluation of the harmful effect of individual environmental factors on genes, and the determination of the causes of malignant cellular degeneration.

Plant cells are commonly used in genetic research because a large number of cells having the same genotype may be obtained from a single plant. The development of methods used to isolate protoplasts, that is, the elimination of a plant cell’s solid membranes, has facilitated the hybridization of somatic cells, genetic transformation, and the study of other genetic processes. The selective breeding of plants has also been initiated. In some cases a plant’s ability to regenerate permits the growing of whole plants from a single cell. Today, the genetics of the somatic cells of plants and mammals offers many challenges from both the theoretical and practical standpoints.