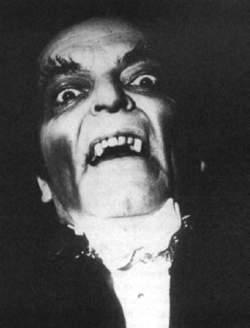 Spain, geographically separated from the Eastern European home of the Slavic vampire, has been largely devoid of vampire reports in its folklore tradition, although there has been a strong presence of witchcraft. Like the witch in ancient Rome, medieval Italy (strega), and Portugal (bruxa), the witch in medieval Spain was believed to have the power to transform into various animal forms, to steal infants, and to vampirize children. Vampirism of children, for example, figured prominently in a lengthy trial at Logrono in the fall of 1610. A century earlier, one of the leading Roman Catholic spokespersons on witchcraft, Fray Martin Castenega, cited vampirism as one of the evil actions in which witches engaged. Spain did not participate significantly in either the vampire debates of the eighteenth century or the development of the literary vampire of the nineteenth century. However, in the post-World War II world of the cinematic vampire, Spain has played a strong role.

The Cinematic Vampire: The vampire in Spanish films emerged at the end of the 1960s just as the Italian and Mexican vampire movies were at their peak. The first Spanish vampire film seems to have been Parque de Juegos (Park of Games), a 1963 production based on a Ray Bradbury story. It stood alone until 1968, when La Marca del Hombe Lobo (The Mark of the Wolfman) and Malenka la Vampira (a joint Spanish-Italian production released in English as Fangs of the Living Dead) appeared.

Fangs of the Living Dead introduced director Amando de Ossoio who, through the 1970s, became one of the most prolific instigators of vampire films. He successively directed La Noche del Terror Ciego (Tombs of the Blind Dead, 1971), El Ataque de los Muertos sin Ojos (Return of the Evil Dead, 1973), La Noche de los Brujos (Night of the Sorcerers, 1973), El Buque Maldito (Horror of the Zombies, 1974), and La Noche de las Saviotas (Night of the Seagulls, 1975). He is most remembered for introducing the blind vampires in La Noche del Terror Ciego, which centered upon the Knights Templars, a religious order whose members were blinded and murdered in the thirteenth century. They returned in two of Ossorio’s other films to attack people they located with their acute hearing.

By far the most renowned of Spain’s vampire filmmakers was Jesus Franco, Spain’s equivalent of Italy’s Mario Bava. In his first vampire film, Franco cajoled Hammer Films star Christopher Lee to Spain to do a remake of Dracula. Lee was intrigued by the opportunity to play a more faithful Dracula than he had been allowed to perform in England. The result was the film El Conde Dracula (1970), which had a script (and a characterization of Dracula) that followed the book more closely than either the Universal Pictures or Hammer productions. No one realized at the time, given the movie’s slow and ponderous pace, that this would be Franco’s best vampire movie.

After an intense period of releasing vampire movies, Spanish filmmakers, like their colleagues in neighboring countries, reacted to the pressure from American movies and largely abandoned the vampire (and horror) theme. Only one vampire film, Tiempos duros para Dracula (1976) was made during the last half of the decade. Naschy, who had continued his werewolf series, revived the vampire twice in the 1980s. El Returno del Hombre Lobo (released in English as The Craving), the ninth wolfman movie, pitted Daninsky against Elizabeth Bathory and her cohorts. Then, in 1982, Naschy made a children’s movie, Buenas Noches, Senor Monstruo, which included Dracula and other famous monsters. Of the several vampire movies made in Spain since the beginning of the 1990s, two feature films, Killer Barbys (1996) and its sequel Killer Barbys vs. Dracula (2002), have received the most widespread distribution. Both were directed by Jesus Franco.