the analysis of the elemental composition of materials on the basis of the X-ray spectra of the materials. Qualitative analysis is based on Mose-ley’s law; the elements present in the test specimen are identified from the positions of the characteristic lines in the emission spectrum of the specimen. Quantitative analysis determines the concentrations of the elements from the intensities of the lines. The methods of X-ray spectrochemical analysis can be used to determine all elements with atomic number Z ≥ 12; in some cases, the determination of even lighter elements is possible. The sensitivity threshold is generally ∼10–2–10–4 percent. The time required for the analysis, including the preparation of the sample, is several minutes. X-ray spectrochemical analysis is a nondestructive technique.

X-ray fluorescence analysis. The most common form of X-ray spectrochemical analysis is the bulk analysis of the composition of a material from fluorescent X rays emitted by the material. Such analysis is based on the relative line intensities, which are measured with high accuracy by X-ray spectroscopic instruments. The relative accuracy of the quantitative analysis varies from 0.3 to 10 percent, depending on the composition of the sample; the intensity of the analytical line of each element is affected by the other elements in the sample. Consequently, the same measured intensity Ii, of the analytical line i may correspond to different concentrations C1, C2, C3, . . . of the test element (see Figure 1), depending on the filler, which is the composition of the sample other than this element. Because of the effect of composition on intensity, an analysis can be made only on the basis of a general theory of the dependence of Ii, on the concentrations of all n components of the sample—that is, on the basis of a system of n equations describing the relationship between the concentrations and Ii. 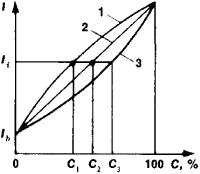 Several particular methods have been developed on the basis of the general theory of analysis. The simplest, the external standard method, can be used when there are no interfering elements in the sample. Here, after the intensity of the analytical line of the sample is measured, the concentration of the test element is determined from the calibration curve of a specimen of known composition (the standard). In the case of multicomponent samples, the internal standard method is sometimes used. Here, a known quantity of the standard, which is an element adjacent to the test element in the periodic table, is added to the sample. The ordinate of the calibration curve in this method is the ratio of the line intensities of the test element and the internal standard. In another method used in many cases, a known quantity of the test element or of the filler is added to the sample. From the change in intensity of the analytical line it is possible to find the original concentration of the element being determined.

Industry uses the standard-background method, in which the ordinate of the calibration curve is the ratio of the intensity of the analytical line of the fluorescent radiation of the specimen and the intensity of the nearby line of the primary X-rays scattered by the sample. In many cases, this ratio is little affected by the composition of the filler. In order to analyze complex multicomponent samples, the complete system of equations describing the relationships between the component concentrations and the analytical-line intensity is evaluated on a computer by the method of successive (usually three or four) approximations.

X-ray fluorescence bulk analysis is used in ore-enrichment plants in nonferrous metallurgy both for monitoring purposes and for rapid analysis of composition. In metallurgical plants, its uses include the determination of the losses of metal in slags, the marking of alloys having a complex composition, and the monitoring of the composition of brasses during the melting process. It is used in cement plants to monitor the composition of mixtures of cement and raw materials. X-ray fluorescence bulk analysis is also employed for silicate analysis.

Electron probe microanalysis. Electron probe microanalysis is carried out with an electron probe beam microanalyzer on a very small area of the sample. This area is—1–3 square micrometers and is thus smaller than the size of a grain of an alloy. The chemical composition is determined from the X-ray spectrum excited by the electron beam. Accurate corrections must be made for the atomic number of the element being determined, the absorption of the element’s radiation in the sample, and the element’s fluorescence excited by the bremsstrahlung component of the radiation and by the characteristic radiation of other elements in the sample.

Electron probe microanalysis is used to investigate, for example, the interdiffusion of two- and three-component systems, crystallization processes (dendritic liquation, the segregation of impurity atoms at dislocations of the main component, and the concentration of some phases at grain boundaries), and local fluctuations in the composition of poorly homogenized alloys.