Dispersive instruments. Dispersive instruments are based on the decomposition of X-radiation into a spectrum by means of diffraction. Such instruments consist of an X-ray tube, a power supply for the tube, a dispersing element (a crystal analyzer or diffraction grating), an X-ray detector, and electronic apparatus that supplies the detector with power and registers the detector pulses. Precision instruments use either crystal analyzers or diffraction gratings. The crystal analyzers are near-perfect crystals that are curved, or “bent,” along the surface of a circular cylinder or a sphere (Figure 1 ,a); the diffraction gratings are concave and have a spherical curvature (Figure l,b). Analytical instruments use either curved crystals or flat crystals. When a flat crystal is used, a Soller slit collimator, consisting of several equally spaced metal foils, is employed to limit to the angular range of the radiation incident on the crystal to between a few minutes and 1 degree of arc (Figure 1 ,c).

The X-ray detectors most frequently used are proportional, scintillation, or semiconductor photon counters; for soft X rays, they are photocathodes with a secondary open-type multiplier are used. If the instrument is intended for the study of primary X-ray spectra, then the test substance is deposited on the anode of a demountable X-ray tube, which is evacuated to a pressure of less than 10-5 mm Hg. If the properties of the substance are being studied by means of fluorescent X rays, then a sealed X-ray tube is used, and the test substance is placed outside the tube as close as possible to its window.

object being analyzed enters all of the quantometer channels simultaneously. The number of detector pulses counted in a specified time interval is recorded by a digital printer. In many cases, the pulses are integrated in the spectrometers, and the results of continuous scanning of the spectrum are then recorded on an automatic chart recorder. The channel outputs can be fed to a computer for further processing.

In industrial enterprises, special-purpose X-ray spectroscopic instruments are often used as composition sensors for the determination of one or more elements. An example is the ARF-4M; it uses the standard-background method of analysis, which is based on the ratio of the intensities of the analytical and background lines. These lines are located close to one another and are registered by a single detector after passing through the two corresponding slits. An oscillating shutter alternately covers each slit; simultaneously, the two systems that register the detector pulses are switched. The registration system stops counting pulses after reaching a specified number of them for the background line. The number of pulses counted for the analytical line is proportional to the ratio of its intensity to the intensity of the background line. Such composition sensors are employed at ore-enrichment plants and nonferrous metallurgical plants. The ARF-4M permits 12 different elements to be determined.

Nondispersive instruments. Nondispersive X-ray spectroscopic instruments are used for X-ray spectrochemical analysis. In such instruments, the X rays from the test specimen are registered directly by scintillation, proportional, or semiconductor counters (Figure 2). The pulse amplitudes of the counters are proportional to the energies of the photons of the radiation being studied. The analytical lines are separated out by a single-channel or multichannel pulse-height analyzer. When the specimen is placed close to the window of the counter, the usable solid angle of radiation for each atom is very large, and the intensity registered is several orders of magnitude greater than that in dispersive instruments. 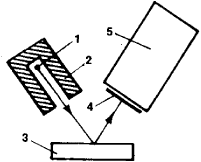 Consequently, an analysis can be made even with the very weak fluorescent X rays from a specimen that is excited by radioisotopic sources or by miniature X-ray tubes having an anode current no greater than several microamperes (µA).

The disadvantage of nondispersive X-ray spectroscopic instruments is the relatively poor resolution of the proportional detector. In order to eliminate interference from the lines adjacent to the analytical line, a pair of balanced filters for the two adjacent elements is usually used in tandem. The filters permit the region of the spectrum where the analytical line is located to be separated out, and they improve the resolution of the nondispersive instrument.

Because of their small size and weight, portable nondispersive analyzers can be used under field conditions in mineral prospecting and can be lowered into boreholes 40 mm or more in diameter down to depths as great as 100 m.

Microanalyzers. Microanalyzers are based on the microprobe method of analysis. Here, primary X rays are emitted from a specimen excited by a point-focus electron beam, or probe, about 1 micrometer in diameter; the radiation is dispersed into a spectrum, and the spectrum is registered. To produce a fine electron beam, an electron gun and focusing magnetic lenses are employed. By using high-transmission focusing spectrometers with curved crystals or concave diffraction gratings, the spectrum at a given point on the specimen can be obtained with a probe current of several µA. The point can be selected visually with an optical microscope.

In current microanalyzers, two X-ray spectrometers are often used, one with a crystal analyzer and the other with a diffraction grating. This approach permits a local analysis to be made for all elements, beginning with Li.