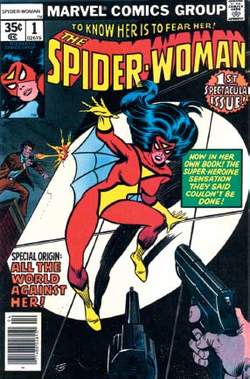 Concerned that someone in either animation or comics would create a female character whose name played off its most popular property, Spider-Man, Marvel’s then-president Stan Lee backed the decision to debut a femme fatale named Spider-Woman. Writer/editor Archie Goodwin created the character for Marvel Spotlight #32 (February 1977), working with artist Sal Buscema. In this story, the character was an agent for the villainous organization Hydra, assigned to kill Nick Fury, agent of S.H.I.E.L.D., and her origin involved her being mutated from a real spider! A four-issue guest-stint in Marvel Two-In-One (#30-#33, August-November 1977) ended with the now-heroic Spider-Woman learning she actually had a different backstory..

Spider-Woman’s “true” origin was revealed in Spider-Woman #1 (April 1978). Jessica Drew learned that she had been exposed to radioactive uranium while a child, and that her scientist father had injected her with an experimental serum made of irradiated spider’s blood to cure her. Put in cryogenic stasis, Jessica aged slowly, and was later released. Jessica discovered that she could fire bioelectric “venom blasts,” had the ability to stick to walls, had superhuman strength and speed, was immune to most toxins, and could secrete pheromones that made men desire her and women fear her. Her red-and-yellow costume also had a pair of glider wings that allowed her to approximate flying.

In the Spider-Woman comic book series, Drew lived for a while in Los Angeles, and became known to the public as a superpowered bounty hunter. She faced villains such as the sixth-century sorceress Morgan le Fay, Gypsy Moth, the Brothers Grimm, Viper, and others. Eventually, she moved to San Francisco and became a private detective as well. Along the way, Drew romanced S.H.I.E.L.D. agent Jerry Hunt, and worked with both wheelchair-bound criminologist Scotty McDowell and a dark hero named the Shroud.

After a rotating series of writers, including Michael Fleisher, Chris Claremont, and Ann No-centi, Spider-Woman was a muddled mess. Her powers were faltering, her supporting cast had changed numerous times, and her origin had been revised and expanded upon until it confused even longtime fans. Spider-Woman ended at issue #50 (June 1983), with a story that appeared to have her body killed, her astral self trapped in limbo, and all memory of her erased from the Marvel universe.

The ending of Spider-Woman was an odd choice for so visible a character. After Filmation created an animated heroine named Web-Woman for the CBS animated series Tarzan and the Super 7 (1978–1980), Depatie-Freleng Enterprises (DFE Films) sold ABC a Spider-Woman animated series. Debuting September 22, 1979, the show lasted one season, with sixteen episodes (including a Spider-Man guest appearance). The show followed comic book history very loosely. Jessica Drew was now the publisher of Justice Magazine, using her enhanced spider-sense to warn her of dangers around the world. Spinning in a circle like Wonder Woman, Drew (the voice of Joan Van Ark) would become Spider-Woman and fly to danger. Often, she would also have to rescue Justice photographer/love interest, Jeff Hunt, and her smarty-pants nephew, Billy Drew; they would travel to sites of trouble in the Justice Jet Copter. The heroine faced mummies, Vikings, Dracula, and a few comic book adversaries such as Kingpin and Dormammu. While Spider-Woman was on the air, she enjoyed a healthy licensing run, appearing on T-shirts, costumes, underwear, school supplies, stickers, Slurpee cups, and more. Once the show disappeared, her appearances on licensed products grew less frequent.

Jessica Drew didn’t stay dead for long, thanks to the Avengers and Dr. Strange, who helped revive her in the comic books, even though she lost her powers in the process (The Avengers #240-#241, February-March 1984). Drew continued her life as a private detective in San Francisco, though she later worked in the East Asian city of Madripoor, a job which brought her into contact with Wolverine numerous times. In modern stories, Drew has worked alongside and even mentored her counterparts, and it appears that some of her superpowers have returned.

The second Spider-Woman was Julia Carpenter, a single mother from Denver, Colorado. First glimpsed in Marvel Super-Heroes Secret Wars #6 (October 1984), this Spider-Woman wore a black costume, with white boots and gloves, and a white spider-symbol across her chest. Her powers—gained from secret exposure to spider venom by the evil Commission—included the ability to psionically stick to walls and ceilings, as well as to create strong “psi-webs” of energy. She also had enhanced strength and speed. She became a member of Freedom Force, a government-sponsored group that captured super-criminals, such as the Brotherhood of Evil Mutants. Spider-Woman aided the Avengers as well, and later joined Avengers West Coast and Force Works, but her career was cut short when a villainous opponent—also calling herself Spider-Woman—stole her powers. Prior to starring in Avengers West Coast and Force Works, Carpenter appeared in her own four-part Spider-Woman miniseries (November 1993-February 1994). She also appeared as one of the semi-regular characters in the syndicated 1994-1996 series Iron Man, part of Marvel Films and New World Entertainment’s animated The Marvel Action Hour.

The third heroine to wear the Spider-Woman mantle was actually a teen girl named Martha “Mattie” Franklin. Taking her father’s place in a mystical ceremony, tomboy Franklin gained great strength. A fan of Spider-Man, Franklin took on the name Spider-Woman, until she lost her powers to Charlotte Witter, an evil woman who was aided by Doctor Octopus in stealing the powers of all three Spider-Women. Franklin eventually stole the powers back, gaining her immediate predecessor’s powers and more—flight, super strength, venom blasts, psionic webbing, psychic powers, and adhesion—in the process. Franklin faced villains such as Shadrac, Nighteyes, and Flesh and Bones in the third Spider-Woman series, which lasted eighteen issues (July 1999-December 2000). Franklin turned up in the same Alias storyline (#16-#21, January-June 2003) as Drew, where it was discovered that she was addicted to drugs, and that her pusher was using her blood to give his own drugs a super-boost.

In recent years, Jessica Drew has returned to her Spider-Woman identity and joined the New Avengers (and later the 2010 version of the Avengers). Julia Carpenter also regained her superpowers and took the name Arachne. When Madame Web was dying, she transferred her precognitive powers to Carpenter, who has become the new Madame Web. However, Mattie Franklin was recently killed by Sasha Kravinoff, the wife of Spider-Man’s enemy, the original Kraven the Hunter.

Although she does not bear the name Spider-Woman yet, one girl in an alternate Marvel future might one day take on that name. In a not-too-distant future, Peter Parker has retired his life as Spider-Man to live with his wife, Mary Jane, and daughter, May Parker. Shortly after May exhibits signs of superstrength and speed, Peter is forced into a battle against the Green Goblin’s vindictive grandson. Learning her father’s secret, May takes one of his spare costumes and web-shooters and battles the Goblin, saving her father’s life and embarking on a career as Spider-Girl. First appearing in What If? #105 (February 1998), and created by writer Tom DeFalco and artist Ron Frenz, May garnered her own series debut in Spider-Girl #1 (October 1998). In the ensuing years, she has fought old-time spider-villains such as Venom, as well as new and updated villains such as Dragon King, Mr. Nobody, Crazy Eight, Spyral, and Raptor. Although the Spider-Girl series was on the brink of cancellation many times since, a vociferous fan base repeatedly rallied for the series and saved it, making it the longest-running solo series starring a female character in Marvel history. But Spider-Girl’s saga finally concluded, at least temporarily, in SpiderGirl: The End (2010), written by DeFalco. A new character, Anya Corazon, alias Arana, who exists in the present-day Marvel universe, has recently adopted the name Spider-Girl. —AM & PS

Feedback
Flashcards & Bookmarks ?
Please log in or register to use Flashcards and Bookmarks. You can also log in with
Flashcards ?
My bookmarks ?
+ Add current page to bookmarks
Mentioned in ?
References in periodicals archive ?
These include Gwen Stacy, or Spider-Woman; Peter Porker, the Spider-Ham (an animated pig); Peni Parker (a teenaged Japanese girl); and, weirdest of all, Spider-Man Noir, a black and white character voiced by actor Nicolas Cage.
Spider-Man's Real Secret Identity? You
Thus Superior Spider-Man was born.C C Spider-Woman I: Jessica Drew has two of the greatest costumes in comics and a rich back story: She worked undercover to bring down Hydra, a Nazi-like organization, and was an agent of the intelligence agency S.H.I.E.L.D.
Spider-Man and the many makeovers of the web-slinger
A&nbsp;"Spider-Man: Into The Spider-Verse" sequel is already in the works and a spinoff featuring Spider-Gwen (Hailee Steinfeld) and other Spider-Women (like Silk, Spider-Woman and more) is being developed as well, according to the (https://www.hollywoodreporter.com/heat-vision/spider-man-spider-verse-sequel-spinoff-works-sony-1164210) Hollywood Reporter.
'Spider-Man: Into The Spider-Verse' Post-Credits Scene Star Revealed
This is followed by the introduction of other heroes, also from different dimensions: teenager Gwen Stacy, secretly Spider-Woman (Hailee Steinfeld); the mysterious Nazi-pummeling Spider-Man Noir (Nicolas Cage); the porcine crimefighter Spider-Ham (John Mulaney); and young Peni Parker (Kimiko Glenn), who shares a psychic bond with an armored spider.
Welcome diversity in mesmerizing, heartwarming 'Spider-Verse' saga
Lenk is being literal: Playing Arachne, the show's magical spider-woman, she was suspended in a gigantic web throughout.
Dancing in a chair and in the air
SPIDER-Man has a fresh fight on his hands - as Sony Pictures gives Spider-Woman her debut in a bigscreen battle of the sexes.
Spidey girl film debut
Captain Jack Sparrow and Superman looked pretty bored, while Spider-Woman had to wait her turn at the ATM behind Captain America, as cosplayers descended on the EXCEL centre.
Anyone having a Super time yet?
Defying his superiors, Hawkeye joins forces with the sultry Russian spy--and with a mismatched group of personalities that include Spider-Man, Spider-Woman, Luke Cage, Captain America and Iron Man.
Marvel New Avengers Breakout
What it means for characters like Miles Morales; members of the FF (Future Foundation, not Fantastic Four); and the All-New Ultimates, including the new Black Widow (she used to be Spider-Woman), Kitty Pryde, Bombshell and Cloak and Dagger, will unfold beginning in April as the soon-to-end "Cataclysm'' miniseries runs its course.
In Marvel's Ultimate universe, fate looms large
Recovering back at her hotel, Daniela joked about the incident on Twitter - dubbing herself Spider-Woman. But she added: "I don't recommend getting bitten by a black widow - it still hurts.' More than 250 people a year are treated for redback bites, mainly in the summer months.
Paramedic! golfer uses tee to tackle 'black widow' spider bite
* The Avengers: Earth's Mightiest Heroes: Season 2 (26 episodes) * Black Panther (12 episodes) * Incredible Hulk (21 episodes) * Iron Man: Armored Adventures: Season 2 (26 episodes) * Marvel Action Hour: Iron Man (26 episodes) * Spider-Man (1978, 26 episodes) * Spider-Man and his Amazing Friends (24 episodes) * Spider-Woman: Agent of S.W.O.R.D.
Netflix "Just for Kids" Experience Now on Wii in Canada
The second-act flights are considerably less exciting, except for one with the resident spider-woman and five other flying gals.
On a swing and a prayer