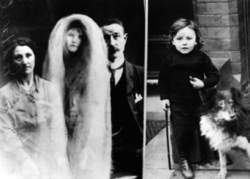 With the invention of photography, Spiritualists became convinced that it was possible to take pictures of ghosts and other paranormal phenomena. Such photographs as these have not survived scientific scrutiny, though many people still believe they are real. Fortean Picture Library.

In the late nineteenth and early twentieth centuries, Spiritualists frequently made use of the relatively new technology of photography to create pictures of what they alleged were spirits of the dead. Usually, a picture would be taken of a medium’s client, and when it was developed one or more images of deceased people—typically, relatives or acquaintances of the client—would also appear on the print. The photo would then be offered as further evidence of the afterlife.

Spirit photography was introduced in the 1860s by Boston photographer William H. Mumler, though within a short time his work was exposed as fake. However, New York photographer Frederick A. Hudson picked up the practice in the next decade, and before the end of the century the practice of producing spirit photographs became popular in England. The appearance of the spirits as somewhat vague figures, often wrapped in ectoplasm-like drapery, led to a belief in their authenticity.

Following up on the periodic discrediting of spirit photographers, in the 1920s and 1930s the Society for Psychical Research (SPR), based in London, sponsored a broad examination of the whole phenomenon under the guidance of Fred Barlow (d. 1964) and W. Rampling Rose. In 1933 they reported that they had been unable to find any genuine spirit photographs. This report was soon accepted by those who study psychic phenomena, and no serious attempt to present spirit photographs has subsequently been made. It should be noted that the SPR study of spirit photographs followed the widespread controversy concerning the photograph of the Cottingley Fairies, but it did not include the photos widely heralded by Arthur Conan Doyle in its survey. Doyle had been an ardent proponent of spirit photography.

The dismissal of spirit photography did not end the use of photography as a tool by various people who believed in paranormal phenomena. In the late-twentieth century, two psychics, American Ted Serios (b. 1918) and Tomobichi Fukurai of Japan, claimed to be able to psychically project images onto undeveloped film. While their claims were accepted by a few people, the phenomenon was difficult to study and the majority of researchers were unconvinced. Unlike spirit photography, such “thoughtography,” as it was called, had little religious value.

Of more importance in religious circles were a variety of odd effects that showed up on snapshots. Most often appearing as swirls of light, they were not visible to the person taking the picture. Such snapshots were passed around gatherings of New Age followers and informally used to bolster belief in various unseen forces. They were, however, rarely taken seriously by psychic researchers. A very few such photographs, such as one of Pentecostal healer William Marion Branham in which the light effect appears as a halo over his head, have been more widely circulated. 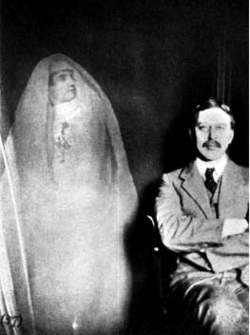 One day in 1861, William Mumler was at the studio of a friend and amusing himself with the equipment. He tried to take a photograph of himself and produced a picture that showed another figure beside him. It was a young girl sitting in a chair, with the chair itself visible through her body. Mumler’s technique had been to set up the camera and focus it on a chair. He would then uncap the lens and jump into position, standing beside the chair and holding still while the camera mechanism tripped and took the photograph. On the back of that first photograph that was produced, he wrote,

“This photograph was taken of myself, by myself, on Sunday, when there was not a living soul in the room beside me—so to speak. The form on my right I recognize as my cousin, who passed away about twelve years since.”

The spirit world had predicted the advent of spirit photographs. Thomas Slater, an optician, was holding a séance with Lord Brougham and Robert Owen in 1856, when the received rappings spelled out that Slater would one day take spirit photographs. Owen commented that if he was dead by the time such photographs were possible, then he would make a point of appearing in one himself. According to The Spiritualist of November 1, 1873, that is exactly what happened.

One of the ways to ensure that a photograph was a true spirit photograph was if the extra figure could be identified as a deceased relative or close loved one of the sitter. If there was no way the photographer could have known that particular person was coming for a portrait, there was little likelihood that the accurate image could be planted ahead of time. However, if the photographer did not process the plate immediately, he could still superimpose a picture—or even a series of pictures around the sitter’s image—when he later developed the plate, if he had access to a picture of the deceased.

This ease of making fake spirit photographs is the main reason that they fell out of favor. It does not mean, however, that spirit photographs are not possible. Today the trend is to concentrate on infrared still and video images, especially during séances and at allegedly haunted sites. Infrared is the electromagnetic radiation outside the color spectrum range of visibility, at the lower end and next to the red. Infrared film has been sensitized to this radiation. It can be used where the light is too dim to allow regular photography, making it possible to photograph things that cannot be seen under many séance conditions (e.g. ectoplasm, spirit forms).

Rosemary Guiley reports that the Ghost Research Society of Oak Lawn, Illinois, collects spirit photographs from around the world. The society analyzes the photographs received by scanning them into a computer and digitizing them. This produces images with far higher resolution than is usually the case, allowing minute details to be examined. The photographs can then be printed out on a laser printer. According to the society, some photographs that seem to be spirit photographs are actually the result of thoughtography, of the sort exhibited by Ted Serios.