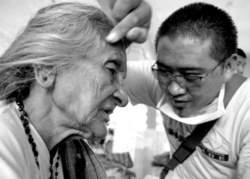 Tibetan Buddhist Tenzing Lama (right) performs spiritual healing on a woman who lost her son and daughter-in-law to the tsunami that struck Southeast Asia on December 26, 2004. AP/WideWorld Photos.

In spiritual healing it is frequently the spirit of a deceased doctor or surgeon who comes through the medium to give or suggest the necessary healing. Sometimes it is the spirit guide of the medium. Gladys osborne Leonard’s Native American guide, North Star, would work through her. She described it in My Life In Two Worlds (1931), “When North Star controlled me for healing, he always appeared to appeal to someone far higher than himself before commencing his treatment. He never spoke, but he used to hold his hands upward and outward as if he expected something to be put or poured into them. His attitude was so obviously one of prayer, or supplication, though he was usually in a standing position.”

The National Spiritualist Association of Churches gives this definition of Spiritual Healing:

Medium George Chapman works as a healer with deceased surgeon Dr. William Lang working through him. Munich-born Dr. Adolphus Fritz, who died in 1918, worked through Brazilian psychic healer José Arigó. Another Brazilian healer, Edivaldo Silva, has a number of different deceased doctors and surgeons working through him.

Feedback
Flashcards & Bookmarks ?
Please log in or register to use Flashcards and Bookmarks. You can also log in with
Flashcards ?
My bookmarks ?
+ Add current page to bookmarks
Mentioned in ?
References in periodicals archive ?
Admittedly, the evidence base of spiritual healing is not strong enough for the human mind to comprehend, and doctors including myself always tend to be a little skeptical about it; but I also quickly remind myself that it is precisely the reason why it is described as being anchored on faith, on one's firm belief.
Pope Francis' healing message
Patients who are nearing their final hours of life find strength and spiritual healing in holding the Torah, praying with it, or simply having it present.
Bedridden Receive a 'Traveling Torah'
They turned me to some basic spiritual truths that I had learned from the Bible and from Science and Health with Key to the Scriptures by Mary Baker Eddy, a pioneer in the field of spiritual healing.
Healing power of faith has place in today's world
Jens Lyberth, manager of the recently elected government, also urged civil servants to use similar spiritual healing methods to help promote better harmony between Greenlanders and Danes.
Greenlandic government official employs Inuit healer to cleanse offices
My students are most impressed with dancers, teachers, choreographers, and companies who use dance for social, educational, and spiritual healing, rather than articles about who's who in the dance world.
Dance serves humanity. (Readers' Forum)
This perspective is laid out in an introductory chapter, "Evolution and Religion," and developed in the major chapters on "The Anthropology of Wondrous Healing," "Wondrous Healing, Hypnotizability, and Folklore," "The Seeds of Religion," and "When the Seeds of Religion Sprout." These indicate that a biologically based spiritual healing practice known as shamanism provided the basis for religion and folk healing.
Wondrous Healing: Shamanism, Human Evolution, and the Origin of Religion
EXPERIENCE Tibetan spiritual healing tomorrow at the Norwegian Church in Cardiff Bay.
Healing hands
The author takes readers on a personal journey through her broken marriage and the physical pain of a near-fatal experience, which ultimately led to her physical, emotional and spiritual healing.
A Journey Back to Me: Rediscovering Physical, Emotional, and Spiritual Wholeness. (faith reviews)
During the last few years I have taken part in the "Basler Psi-Tage", [3] a congress for esoteric and frontier-sciences -- often on the subject of spiritual healing. It is a congress outside the churches.
HEALING IN THE LOCAL CHURCH - OEKOLAMPAD BASLE (SWITZERLAND)
"Spiritual healing is the channelling of positive energy from healer to patient.
Tell me about your childhood. Ruff was it?; DOG ON THE COUCH 1
Tears provide a physical release that can lead to psychic and spiritual healing and peace.
The importance of being sorry
Frances McAll and her husband, Kenneth McAll, have each written several books--about their experiences in Japanese internment camps in China during World War II, about his pioneering work on the boundaries between psychiatry and spiritual healing, about her work as a GP.
Hurdles are for jumping