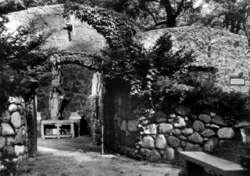 Spiritualist camps, which first became popular in late-nineteenth-century America, are secluded places where people of similar religious conviction can gather in private to attend meetings and focus on nurturing their faith. Fortean Picture Library.

In the decades after the American Civil War, the Spiritualist movement, drawing on the Methodists and other revivalist churches, adopted a format of holding summer camp meetings. These were usually held in late summer after crops had been planted but before the harvest season, when farming families had more free time. Held during the hottest part of the year, the camp gatherings were located at sites that typically included shade trees and often a lake. As with the revivalist centers, these campsites began more-or-less informally and then grew into more permanent establishments with cottages, hotels, restaurants, businesses, and a variety of other buildings to house a spectrum of extracurricular activities.

Those attending a camp in the nineteenth century could stay in the hotel, rent a cottage, or pitch a tent. Daily schedules would allow for time to attend lectures, sit in at séances, or receive the ministrations of a healer. There would always be plenty of time left for a variety of recreational opportunities, from shopping to sailing on the lake to dance parties in the evening. Officials and leaders in the movement could gather at the campgrounds to conduct their regular business. Most importantly, the camps supplied a welcoming and friendly atmosphere in which people who felt that contacting the spirit world through mediumship was possible could practice their faith and meet with like-minded believers.

By 1880 Spiritualist camps had spread from New York, where the movement began, throughout New England and across the Midwest. Significant expansion of the movement over the next two decades saw the first camps in California. Summerland, south of Santa Barbara, was founded in 1889, and Harmony Grove, near Escondido, opened in 1896. The South was the least hospitable to the movement, but one of the most famous camps, located at Cassadaga, Florida, opened in 1894.

The camps remained for many years among the most stable institutions of Spiritualism, which continually suffered ups and downs, especially with the occasional exposure of fraudulent medium practices. Then, in the last half of the twentieth century, many of the camps were closed when the movement as a whole declined.

Among the Spiritualist camps that have survived are the ones at Cassadaga, Florida, and Lily Dale, New York. Both are associated with the National Spiritualist Association of Churches, the oldest national Spiritualist body in America. Others include Harmony Grove in California; Pine Grove Spiritualist Camp in Niantic, Connecticut; Temple Heights Spiritual Camp in Maine; and Camp Chesterfield near Anderson, Indiana.

Camp Chesterfield became the site of one of the most recent major revelations concerning mediumistic fraud. In 1960 two young parapsychologists were allowed to film several séances where spirits supposedly regularly materialized. Although the séances took place in the dark, they were using infrared cameras. The manifestations occurred, but when the film was developed it was clearly revealed that confederates were using phosphor-covered cheesecloth to imitate the mysterious substance known as ectoplasm. Besides the medium in charge, several other Chesterfield mediums were clearly identified in the resulting pictures. Interestingly enough, when the Spiritualist periodical Psychic Observer, ran the pictures it lost so many subscribers and advertisers that it went out of business. Chesterfield, however, survived the scandal. It has also survived subsequent exposés by former medium Lamar Keene (1976) and paranormal debunker Joe Nickell (2002).

Feedback
Flashcards & Bookmarks ?
Please log in or register to use Flashcards and Bookmarks. You can also log in with
Flashcards ?
My bookmarks ?
+ Add current page to bookmarks
Mentioned in ?
References in periodicals archive ?
While his father moved the family between states as dictated by his work, Carroll visited spiritualist camps and attended seances which often featured materializations in red light.
Obituary: Carroll Blue Nash