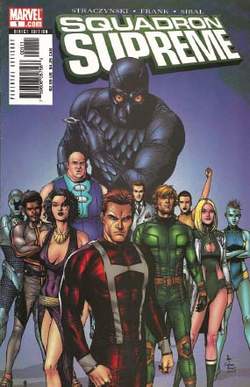 Marvel’s Squadron Supreme began as an inside joke about DC’s Justice League of America. In The Avengers #69 (October 1969), writer Roy Thomas and artist Sal Buscema introduced a new team of supervillains, the Squadron Sinister, consisting of Hyperion, Nighthawk, the Whizzer (not to be confused with the similarly named Golden Age hero), and Doctor Spectrum, who were parodies of Justice League members Superman, Batman, the Flash, and Green Lantern, respectively.

Subsequently, in The Avengers #85 (Februa 1971), Thomas and Sal’s brother, artist John Buscema, sent members of the Avengers to a parallel Earth (known as Earth-712), which had its own versions of Hyperion, Nighthawk, the Whizzer, and Doctor Spectrum. There these four were members of a superhero team called the Squadron Supreme. Thomas, John Buscema, an later writers and artists created other Squadron members, including Power Princess (based on Wonder Woman), Amphibian (Aquaman), Arcann (Zatanna), Blue Eagle (alias American Eagle and Cap’n Hawk, based on Hawkman), Golden Arche (alias Hawkeye, based on Green Arrow), Lady La (alias Skylark, based on Black Canary), Nuke (Firestorm), the Skrullian Skymaster (Martian Manhunter), and Tom Thumb (the Atom). The Squadron Supreme continued to appear as gues stars in Avengers and Defenders.

The late Mark Gruenwald wrote the Squadron Supreme maxi-series (September 1985-August 1986), a serious examination of the superhero genre. In this series, the Earth has been devastated as a result of alien attack. The Squadron assumes control of the United States to implement their “Utopia Program,” designed to solve the nation’s ills. Gruenwald shows how, despite the Squadron’s good intentions, their dictatorship inevitably becomes morally corrupt (for example, by brainwashing criminals), and Nighthawk, leading a superhero team called the Redeemers, finally overthrows the Squadron’s rule.

Writer J. Michael Straczynski and artist Gary Frank created a different version of the Squadron, set on a different parallel Earth (Earth-31916), in the comics series Supreme Power, whose first issue was cover-dated January 2001. This version of the Squadron worked for the United States government. Among the various differences between the two versions, Stanley Stewart, the Flash counterpart in the Earth-712 Squadron, is a white man called the Whizzer, whereas the Earth-31916 Squadron’s Stewart is an African American called the Blur. The two versions of the Squadron Supreme met in Marvel’s Ultimate Power maxi-series (2006–2008). Squadron members Hyperion, Nighthawk, and Power Princess have appeared in an episode of Marvel’s animated television series The Superhero Squad Show. —PS

Feedback
Flashcards & Bookmarks ?
Please log in or register to use Flashcards and Bookmarks. You can also log in with
Flashcards ?
My bookmarks ?
+ Add current page to bookmarks
Mentioned in ?
References in periodicals archive ?
In 1997, Marvel granted his request and the mixture was later used to illustrate Squadron Supreme - a reprint of a limited edition book that Gruenwald wrote in 1985.
Our laugh requests.. Pratchett follows other greats
The company obliged by reprinting a 1985 collection of his Squadron Supreme comic with the specially prepared ink in 1997.
THEY DID IT THEIR WAY..
The following year his wish was granted when Marvel used his ashes to illustrate Squadron Supreme, a limited-edition comic that Gruenwald had written in 1985.
Ash with panache; From Frisbees to space trips... the world of weird send-offs