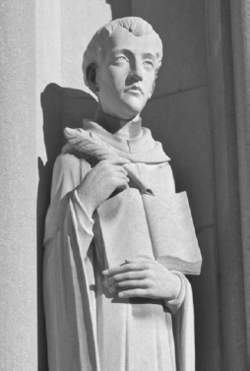 St. Thomas Aquinas gained the discipline to remain chaste after experiencing a dream in which angels bound him in a fiery cord.

Thomas Aquinas was born in Rocca Secca, in the kingdom of Naples, in either 1225 or 1227 (the date is uncertain). He was the son of Landulph, count of Aquino, and Theodora, the countess of Teano. Before his birth, his mother sought out a local hermit to divine her child’s future. The hermit told her that he would be a great man who would be devoted to the church, and that the impact of his words would last throughout all time. At the age of five, Thomas received his first tutelage by the Benedictine monks of Monte Cassino. While a student there he was diligent in his studies, devoted in his prayer, and inquisitive as to the nature of God, often asking, “What is God?”

The monks were extremely impressed by the level of dedication they found in the five-year-old child. He stayed with them in Monte Cassino until 1236. It was then that one of the brothers wrote to Thomas’s mother and informed her that his brilliance would fade into obscurity if the boy was not pushed to achieve beyond the level of education the monastery could provide him. Shortly thereafter, Thomas enrolled in the University of Naples, where he studied until sometime in the early thirteenth century. When he joined the Order of St Dominica, his family was shocked that someone of noble birth would choose the life of a pauper.

Out of fear that his family would come to take him away, the Dominicans decided to send Thomas to Paris. On his way to Paris, however, Thomas was accosted by his brothers at his mother’s bequest and held captive for approximately two years in the fortress of Giovanni at Rocca Secca. During his imprisonment, his family tried desperately to talk him out of his chosen vocation. His brothers went so far as to send a beautiful woman to his room to seduce him and break his oath of celibacy. He chased the girl from his room with a poker retrieved from the fire.

That night angels appeared to him in a nightmarish dream—angels who wrapped him up in a cord of fire so terribly painful that he awakened with a cry. The cord was a girdle of eternal chastity; he never again suffered from the desires of the flesh and lived the remainder of his life in celibacy. The duration of his imprisonment he then spent in study, just as he would have if he had actually been in Paris. Eventually, his mother granted him freedom, and Thomas finally was able to return to the Dominicans. They were relieved to discover that he was as educated in theology and the scriptures as he would have been if he had not been sidetracked, perhaps more so.

At some point during the years 1244 and 1245, he became a student of Albertus Magnus, a renowned professor of the order. They traveled together to Cologne, where Magnus was to teach at the university. Magnus initially thought that Thomas was slow, due in part to the boy’s overwhelming modesty and humility. But after reading Thomas’s brilliant defense of a particularly difficult thesis, Magnus had cause to reevaluate his opinions. Then, in 1250, Thomas Aquinas achieved a place among the priesthood.

After spending years with Magnus in Cologne, Thomas traveled to Paris to attend the university and earn his doctorate of theology. A bitter dispute at the university delayed this significantly. It was at the university that Thomas wrote The Majesty of Christ, said to be inspired by a suggestion received in a dream in which a heavenly visitor instructed him.

In 1256, he finally received his doctorate. Nine years passed before the Pope chose to honor Thomas Aquinas with the position of Archbishop of Naples. If he had received the position earlier, he probably would never have had the chance to write his chief work, Summa theologica. He also collaborated on the Studia generalia of the Dominican Order, a system of studies and a handbook of piousness, before he died on March 7, 1274, at Fossa Nuova. On July 18, 1323, Pope John XXII canonized Thomas Aquinas.

Although he lived for less than fifty years, St. Thomas Aquinas signed his name to more than sixty-six religious masterpieces. Each embodied remarkable insight and piety. The Summa theologica was his magnum opus. St. Thomas claimed to have been advised on the content of certain passages from a dialogue he had with the apostles Peter and Paul while dreaming. Regardless of the very non-Aristotelian dreams that plagued his life, St. Thomas attempted to rewrite all of the Christian theology in the language of Aristotle and categorized it accordingly. It was his an attempt to diminish the value the common people put in their dreams.

St. Thomas concluded that divination through dreams was lawful as long as one was positive that the dream stemmed from divine design and the dreaming state used to achieve said dream lacked artificial influences. He also acknowledged the demonic influence in the common occurrence of prophetic dreams and nightmares.

Feedback
Flashcards & Bookmarks ?
Please log in or register to use Flashcards and Bookmarks. You can also log in with
Flashcards ?
My bookmarks ?
+ Add current page to bookmarks
Mentioned in ?
References in periodicals archive ?
Games like "League of Legends," "Overwatch" and "Fortnite," all of which St. Thomas Aquinas College are playing, are extremely popular.
Esports arrives: Catholic colleges are among institutions fielding varsity esports programs
Siegel's extensive involvement on various community boards and his dedication to the service of people exemplifies the values we strive to instill in our students at St. Thomas Aquinas College."
Stephen Siegel receives honorary doctor of commercial science
Whether they're earning a graduate degree, a Baccalaureate, a professional certificate, or an Associates degree, today they become graduates of St. Thomas Aquinas College, and with this great achievement, complete a major chapter in their lives.
Your moment in history
For the St. Thomas Aquinas students who have taken IM training, the pre- and post-test results show significant improvements based on the nationally recognized Woodcock-Johnson 3rd Edition Standardized Test.
'Training for the brain' technology yields academic gains at St. Thomas Aquinas H.S
Still, it is an error to present the quinquae viae of St. Thomas Aquinas as if it were the core of his thinking (392-93), rather than an ancillary concern.
Adventures in Ideas. (Books)
St. Thomas Aquinas was a complex and profound thinker.
Aquinas: Moral, Political, and Legal Theory
In his homily, Father Mascari reminded his Filipino brethren about the inspiration of St. Thomas Aquinas.
Carmelites launch music CD; Bamboo organ fest mounts Fr. Sengson's 'Exodus'
In this year's St. Thomas Aquinas lecture, McGary (philosophy, U.
The post-racial ideal
According to this author, freedom from our current state of idolatry will not be achieved without a return to the philosophy of St. Thomas Aquinas.
From Lise Anglin re avarice
Boyle is a graduate of St. Thomas Aquinas College in Sparkill, NY where she earned a BS in business administration.
Union State Bank
Scalia, a Catholic, consistently upholds the constitutionality of the death penalty and in speeches argues that the church doctrine approving capital punishment dating to us St. Thomas Aquinas and St.
Three years ago in the New Orleans airport, death penalty activist St. Joseph Sr. Helen Prejean ran into Supreme Court Justice Antonin Scalia, who had been duck hunting with Prejean's brother, Louie
Perplexity Simpliciter and Perplexity Secundum Quid: A Look at Some Contemporary Appeals to St. Thomas Aquinas, M.
International Philosophical Quarterly Vol. 41, No. 4, December 2001