A domed or conical roof over a stair that rises above the main roof surface
Illustrated Dictionary of Architecture Copyright © 2012, 2002, 1998 by The McGraw-Hill Companies, Inc. All rights reserved 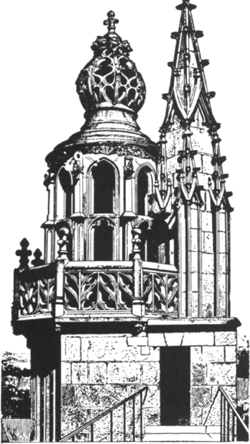 stair turret
1. A building containing a winding stair which usually fills it entirely.
2. A stair enclosure which projects beyond the building roof.
McGraw-Hill Dictionary of Architecture and Construction. Copyright © 2003 by McGraw-Hill Companies, Inc.

Feedback
Flashcards & Bookmarks ?
Please log in or register to use Flashcards and Bookmarks. You can also log in with
Flashcards ?
My bookmarks ?
+ Add current page to bookmarks
Mentioned in ?
References in periodicals archive ?
Their well-known facades and a corner stair turret will be retained as part of the project while the neighbouring building at 21 George Street, the former home of air pollution control company Lodge Cottrell, will be entirely demolished.
Campus plans will provide an extra 200 jobs
Excavations between 1933-48 exposed the foundations of the keep building with chimney, a stair turret and a wardrobe room.
BATTLE TO SAVE BAGOTS CASTLE
(468) It would have a temporary stage, and "Heavens all over the saide stage, to be borne or carried without any postes or supporters to be fixed or sett upon the saide stage." The stage itself had to be "carried or taken awaie, and to stand uppon tressells good, substantiall, and sufficient for the carryinge and bearinge of suche a stage." We have to ask whether the original Rose in 1587 had a similarly temporary stage and unsupported cover, and even a stair turret on the eastern flank, which is the section of its footprint not yet excavated.
In the absence of the Globe on the other side of the Rose site, the Swan's twenty-year old frame with exterior stair turrets provided the model for an arena matching the needs of both plays and bear-baiting.
Bears and players: Philip Henslowe's double acts
It seems this was originally a square, medieval stair turret, leading to the great hall on the first floor, and that the rounded form came from much later infilling." With planned consolidation works nearing completion, Landmark is looking forward to the next phase of the project, to introduce modern living spaces into the shell of the castle.
We need 101,000 to save Astley Castle; HERITAGE: Hols accommodation project could be saviour of historic landmark
Its lofty stair turret survived long after most of the walls of the church had crumbled away.
Dudley's other claim to fame; To see the remains of a priory still standing proud of the ground in the Midlands, you have to go to Dudley, more commonly famed for its castle, explains Chris Upton
The oldest portion contains interesting features including a stair turret, mullioned windows and embattled parapets.
For What it's Worth: Willoughbridge Lodge
"The only direction that can't be seen from the top of the tower is towards Bellbroughton - the stair turret is in the way."
FOOL'S PARADISE; Ross Reyburn visits some of the Midlands' top follies with a leading expert on the subject
The result is a triumph: a spectacular evocation of Fonthill but with a character of its own, the interest of its soaring octagonal form enhanced by stair turrets and gables.
Architecture
Choosing to amplify but not mimic the sense of scale and monumentality of the Kahn buildings has proved an extremely successful tactic, yet even with his clear admiration for the originals, Patel was ultimately unable to resist one or two more overt references, adding semi-circular stair turrets and circular apertures.
162 Indian Institute of Management
Frank Hammoutene has risen to the challenge of designing a range of housing giving onto the virtually blind flank wall of the American Institute by confronting Gehry across a canyon street with a striking metallic screen of angled balconies and a flourish of stair turrets.
Bercy brief