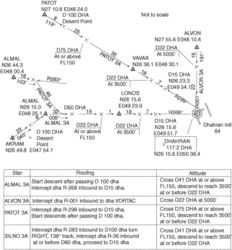 An ATC (air traffic control) coded IFR (instrument flight rules) arrival route established for arriving IFR aircraft destined for certain airports. Its purpose is to simplify clearance delivery procedures. It is a preplanned instrument rule ATC procedure published for pilot use in graphic and/or text form. STARs provide a transition from an en route structure to an outer fix or an instrument approach fix/arrival waypoint in a terminal area.

Feedback
Flashcards & Bookmarks ?
Please log in or register to use Flashcards and Bookmarks. You can also log in with
Flashcards ?
My bookmarks ?
+ Add current page to bookmarks
TheFreeDictionary presents:
Write what you mean clearly and correctly.
Mentioned in ?
References in periodicals archive ?
Aircraft are encouraged to use standard instrument departures (SIDs) and standard terminal arrival routes (STARs), but if unable to do so, the pilot should advise ATC immediately.
IFR Route Changes: We can't always go direct. Avoid in-flight IFR route changes by paying attention to preferred and TEC routes during your preflight planning
Jeppesen has enhanced its SID (standard instrument departure) and STAR (standard terminal arrival route) charts to increase situational awareness and reduce head-down time while referencing chart information, the company said.
Jeppesen introduces improved IFR charts to increase situational awareness
Incorporating Radio Frequency (RF), Standard Instrument Departures (SIDs), Standard Terminal Arrival Routes (STARs), holding patterns and instrument approaches, UNS-1Lw FMS and LP/LPV monitor delivers potentiality for point-to-point navigation.
United Kingdom : DAC receives permit for latest FMS
Users can access fuel pricing and availability information on their routes, together with accessing all AeroNav Services Departure Procedures (DP), Standard Terminal Arrival Routes (STARs), approach charts and airport diagrams.
Garmin subsidiary updates Pilot MyCast iPhone app
Check before you fly to see if the destination has any Standard Terminal Arrival (STAR) procedures specifically designed for slower, prop-driven aircraft.
Big city arrivals: about 80 percent of U.S. airports are non-towered, but lurking among the remaining 20 percent are some big airport traps. Here's how to avoid 'em
Under this MoU, ANS will join forces with Quovadis, to design new standard terminal arrival routes (STARs) and necessary navigation performance authorization required (RNP-AR) for Al Bateen Executive Airport.
UNITED ARAB EMIRATES : ADAC inks MoU with Quovadis
If your departure airport has a standard instrument departure (SID) or an obstacle departure procedure (ODP), and your arrival airport has a standard terminal arrival (STAR), you can make ATC's job easier by including these in your flight plan.
Flying off the rails: you don't need GPS in your panel to go direct. You just need an understanding of the limits of VORs and air traffic control
On a lark one night instead of filing direct to KCLT, I found a standard terminal arrival (STAR) procedure that coincided with my direction of flight, and I filed direct to the final fix on the STAR en route to my destination.
Smarter Than Direct: You rarely get a direct routing to your destination in busy airspace, so you can either anticipate what ATC will throw at you or push buttons all the way
Based on this MOU, Quovadis will design new Standard Terminal Arrival Routes (STARs) and Required Navigation Performance Authorization Required (RNP-AR) approaches for Al Bateen Executive Airport.
UNITED ARAB EMIRATES : ADAC Air Navigation Systems Signs MoU with Quovadis to Reduce Fuel Emissions
Standard Terminal Arrival Procedures, or STARs, are used in busy airspace to funnel large numbers of aircraft into one or more airports.
Approach Gates: Approaches are a lot easier if you think of the various fixes on the way to the runway as points at which to manage speed, configuration and descent rate
One reason no one carried SIDs (standard instrument departures) and STARs (standard terminal arrivals) is they mostly were designed for jets in and out of major hubs.
Procedure Briefings: Every published instrument procedure has some common elements you need to learn about. It's best to know them before you need them