a power plant in which part or all of the units operate when the consumption of electric power in the system sharply increases for short periods of time—that is, at times of peak load. The units must have a high degree of operational adjustability and must be capable of building up full power rapidly—sometimes in 2–3 minutes—and of being shut down just as rapidly. Standby power plants can be of the hydroelectric or the gas-turbine type; steam turbine electric power plants that have been adapted for such operation can also be used as standby plants. 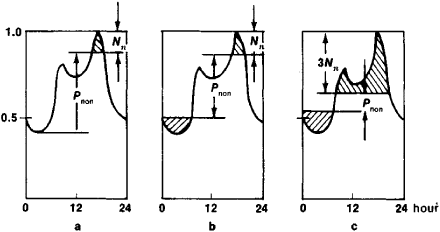 Figure 1. The covering of peaks and equalization of power-system load upon the connection of a gas-turbine unit (a), a pumped-storage hydroelectric unit (b), and a gas-turbine unit with air storage (c): (Nn) standby power, (Pnon) nonuniformity of load during 24 hours. Time of day in hours is plotted along the abscissa axis, and power-system load in relative units along the ordinate axis.