[′stär ′sa‚fīr]
(mineralogy)
A variety of sapphire exhibiting a six-pointed star resulting from the presence of microscopic crystals in various orientations within the gemstone.
McGraw-Hill Dictionary of Scientific & Technical Terms, 6E, Copyright © 2003 by The McGraw-Hill Companies, Inc. 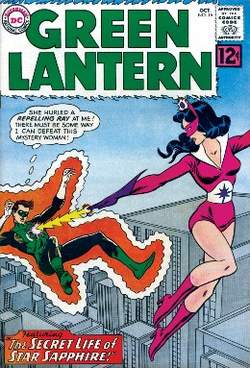 (pop culture)
The illustrious Star Sapphire has had a sparkling career as one of the DC Universe's most menacing supervixens. She was introduced in comics' Golden Age (1938–1954), in a story in All-Flash #32 (1948), as a fish-netted, purple-clad exiled queen of the female warrior race the Zamarons. This original Star Sapphire journeyed to Earth to rule it, and in the process battled the original Flash. More than a decade later, in the pages of Green Lantern vol. 2 #16 (1962), scripted by John Broome and rendered by Gil Kane, the ultra-feminist Zamarons selected career woman Carol Ferris, girlfriend of Hal (Green Lantern) Jordan, as their new ruler, Star Sapphire (sometimes historically referred to as Star Sapphire II). (The original Star Sapphire attempted to eliminate her new rival, but was defeated by the Flashes [Jay Garrick and Barry Allen] and Green Lanterns [Alan Scott and Hal Jordan] of two generations. She disappeared into the Zamarons' 7th Dimension, and has not been seen since.) Clad in a magenta leotard with matching go-go boots and eyemask and a star emblem on her midriff, Star Sapphire—whose primary weapon, the Green Lantern power ring–like star sapphire gem, allows her to fly and can hurl large blasts of energy—actually defeated the Emerald Crusader in their first meeting. Over much of the Silver Age (1956–1969), Ferris would fall under the Zamarons' hypnotic spell, with Star Sapphire taking control of her form, the supervillainess identity unknown to Ferris. During the mid- to late 1970s she was frequently seen as a member of the Secret Society of Super-Villains. Over the years, Star Sapphire has endured bouts of emotional crisis, split-personality, and the horror of morphing into a male being called the Predator. In the 2005 “Crisis of Conscience” storyline in JLA, Star Sapphire hooked up with her old cronies in the Secret Society of Super-Villains for a full-scale assault against the Justice League of America. The character has appeared on Cartoon Network's Justice League (2001–2004), voiced by Olivia d'Abo, in which her streamlined, high-fashion style—designed by superstar artist Bruce Timm—respectfully nods to Kane's original design for the character in the Silver Age Green Lantern comics, while contemporizing her for a modern viewership.
The Supervillain Book: The Evil Side of Comics and Hollywood © 2006 Visible Ink Press®. All rights reserved.

Feedback
Flashcards & Bookmarks ?
Please log in or register to use Flashcards and Bookmarks. You can also log in with
Flashcards ?
My bookmarks ?
+ Add current page to bookmarks
Mentioned in ?
References in periodicals archive ?
Gem Trade Lab Notes- Synthetic star sapphire with an unusual color.
Diffusion-induced blue colour and asterism in sapphire
These days, a cared for Sapphire will grab attention like a Bentley, and a good Star Sapphire - the best company ever produced - is an expensive rarity.
Clutching a jewel; CLASSIC CARS
was sold to the Kazanjian brothers who cut the stone to reveal a beautiful star sapphire. Tipping the scales at an impressive 733 carats, the Black Star of Queensland is one of the largest star sapphires in the world.
The Black Star of Queensland
The client believed it was a star sapphire. Initial visual observation showed that the bottom of the cabochon was flat, whereas most star sapphires have a convex bottom (to retain weight, in light of their high value), so this was our first indication that something was amiss.
Quartz imitation of star sapphire
The Black Star Sapphire of Queensland Until December 2, 2007
Sigmund Samuel Gallery of Canada opens October 6, 2007
Vincent Hammersley, aged 52, from Eastern Green, Coventry, brought along his 1959 Armstrong Siddeley Star Sapphire.
Motoring display makes it a classic day; SUN AND SUCCESS FOR THE COVENTRY RUN
She will also discuss the remarkable Black Star Sapphire of Queensland.
Curator's corner
206: THE elegant Armstrong Siddeley Star Sapphire was last in a long line of quality cars built at Parkside, Coventry.
[3] COVENTRY SHAKESPEARE RUN
This optical characteristic is the same as that displayed by black star sapphires (Moon and Phillips, 1984; Hughes, 1997, p.
From exsolution to 'Gold Sheen': a new variety of corundum
Paradaiza necklace in 18-karat white gold with diamonds and cabochon star sapphires, VAN CLEEF & ARPELS.
Botanical beauties
Other breathtaking examples are actress Joan Crawford's wide diamond bracelet punctuated with star sapphires by Raymond C.
Masterpieces of American Jewelry
“Moonstone, sunstone, pink topaz, star sapphires, peridot, citrine (my birthstone) so many choices...”
Life a Box of Chocolate and Free Gemstones for Naples Woman Who Finds Mark Loren Rock