1. a star-shaped figure formed by extending the sides of a regular pentagon to meet at five points
2. such a figure used as a magical or symbolic figure by the Pythagoreans, black magicians, etc.
Collins Discovery Encyclopedia, 1st edition © HarperCollins Publishers 2005 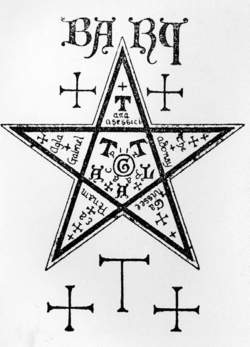 This pentagram, from a fourteenth-century manuscript, is designed to facilitate the acquisition of “all secrets of knowledge.” Courtesy Fortean Picture Library.

The pentagram is a five-pointed, star-shaped figure usually drawn with the single point upward. It is also known as Seal of Solomon, pentalpha, Star of Logres, goblin's foot, witch's cross, and Druid's foot.

As a magical figure, its origins are lost in time. Eliphas Levi describes the pentagram as signifying "the domination of the mind over the elements." It is generally associated with the life force, much like the ancient Egyptian ankh, and was often associated with the Microcosmic Man—a figure of a man, with arms and legs extended, superimposed on a five-pointed star. For medieval alchemists, magicians, and philosophers, the pentagram symbolized man as the microcosm. As Barbara Walker says, "Man is the world, the world is man, and his genitals are the center of the universe." It was considered an illustration of the principle "as above, so below."

The pentagram has always been associated with magic. The five points represent the four elements—earth, air, fire and water—surmounted by spirit. According to the fourteenth century tale of Sir Gawain and the Green Knight, the pentacle was sacred to Morgan, the Celtic death-goddess, and in the tale was carried on a blood-red shield in her honor.

The Golden Dawn's "Lesser Ritual of the Pentagram" includes a self consecra- tion by drawing the pentagram on the body, touching with the tip of a ritual knife. A similar consecration (done either on oneself or on another) is found in some traditions of Witchcraft, where the forefinger is dipped into oil or salted water and then touched to the forehead, right breast, left shoulder, right shoulder, right breast, back to forehead. In some degree systems (e.g. Gardnerian), a variation of this ritual is part of the consecration for first degree. An inverted pentagram—with the two points upward—is for the second degree, and a pentagram surmounted by a triangle is for the third degree.

In modern-day Witchcraft, a pentagram is described in the air, using an athamé, to seal a consecrated circle. It may also be drawn with single point uppermost to invoke and with two points upward to banish.

a regular pentagon on whose sides are constructed isosceles triangles of identical height. In particular, the triangles can be equilateral or can be formed by extending the side of the pentagon. In the latter case the pentagram is a star-

shaped polygon that can also be formed by the diagonals of a regular pentagon (see Figure 1).