an automatic control system in which the error in the steady state is usually not equal to zero and depends on the load on the controlled system. 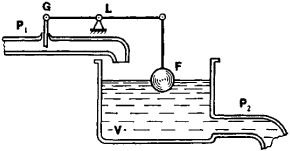 As a rule, static controllers are relatively simple and economical and have quick response times. These characteristics make them suitable for use in automatic control systems for industrial installations. Figure 2 shows a very simple static control system for regulating the level of a liquid in a vessel. If there is an increase in the loss of liquid, the liquid level in the vessel is reduced, the position of the float is altered, and the gate in the valve rises, increasing the inflow of liquid. The steady state is achieved when the loss of liquid is equal to the inflow, which corresponds to some level different from the original level.