A Scandinavian church of the 12th and 13th centuries constructed entirely of wood with few windows and a steep roof; highly original in structure with fantastic semipagan decorative features. 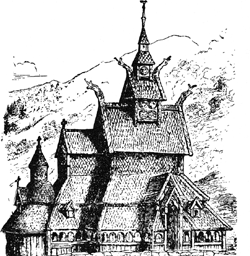 Feedback
Flashcards & Bookmarks ?
Please log in or register to use Flashcards and Bookmarks. You can also log in with
Flashcards ?
My bookmarks ?
+ Add current page to bookmarks
Mentioned in ?
References in periodicals archive ?
Most stave churches were built between 1150 and 1350.
Norwegian dedication ceremony
After cruising through Nordfjord, Boudicca stops in Skjolden, where cruise guests are sure to be captivated by the unspoiled and beautiful town, with its stave church decorated in unusual and intricate markings.
Visit the "Greatest Fjords of Norway" All in One Holiday with Fred. Olsen Cruise Lines
discovery; and the colorful Norskefolkmuseum (Norwegian Folk Museum), a remarkable, open-air collection of historic Norwegian farmhouses, period structures, and a striking, thousand-year-old stave church.
Norway in a nutshell
Regular coaches and buses will take you further afield to the home of Norway's most famous composer, Edvard Grieg, at Troldhaugen; and to the Fantoft stave church.
Travel: Fjord focus; TREVOR MASON SUCCUMBS TO NORWAY'S CHARMS
The most dramatic structure is the triangular peaked Gol Stave Church, a tall wooden masterpiece dating from 1200.
Oslo: Norway's capital playground is in harmony with the land and sea
On the way we visited the old stave church at Borgund; it was the most fantastic sight you could imagine, like the whim of some brilliant child, a cockchafer's shell carved by a simple giant with his sheath-knife, with simple crosses and arrogant dragonheads, all twists and twirls, louver on louver.
Gathered under a church roof. (Spring Books)
A stave church is a medieval wooden Christian church building.
Norwegians travel to Chicago for dedication ceremony
Meanwhile, in Ashton Park, West Kirby, a Viking stave church will be built to celebrate Wirral's unique Viking history and Norse connections.
Castle TREAT; LAURA DAVIS ON THE CARDBOARD BUILDINGS ON WAY TO CITY
Past and present The open-air Norsk Folkemuseum contains 155 traditional houses as well as a Stave Church dating back to the 13th Century.
Fjord focus; SECOND GUIDE TO OSLO
To give the cruise its official title, on BM179 Norwegian Secrets there was a choice of 18 shore excursions ranging from bird watching by boat at Runde during our stopover at Alesund to a hike on the Nigardsbreen glacier and from a trip to the Urnes Stave Church and Sogn Folk Museum at Skjolden to seaplane sightseeing trips at Bergen and Ullensvang.
Living travel: Sea cuts up rough, but a cruise is still balm to the soul; George Macintyre discovered to his delight that a Fred. Olsen Cruise Lines trip to the Norwegian fjords with his wife was the perfect antidote to the stress and pressures of putting their house together again after the recent flood
We filled the time in between with an 80km drive up to the town of Vik instead, sitting aside the Sognafjord, visiting the nearby Hopperstad stave church, one of the best examples of these historic wooden buildings made from vertical planks slotted into upright posts.
Norway in spring melted our hearts; Glacier skiing, cycling around a fjord, driving through 18ft of snow and parasailing above ice-cold lakes made for a thrilling family holiday