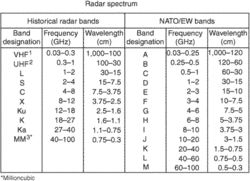 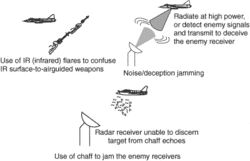 The ordered array of known electromagnetic radiation, extending from the shortest cosmic rays, through gamma rays, X-rays, ultraviolet radiation, visible radiation, and infrared radiation. It includes microwave and all other wavelengths of radio energy. See the illustration for a more detailed view of this spectrum.
An Illustrated Dictionary of Aviation Copyright © 2005 by The McGraw-Hill Companies, Inc. All rights reserved

The range of electromagnetic radiation (electromagnetic waves) in our known universe, which includes visible light. The radio spectrum, which includes both licensed and unlicensed frequencies up to 300 GHz has been defined worldwide in three regions: Europe and Northern Asia (Region 1); North and South America (Region 2), and Southern Asia and Australia (Region 3). Some frequency bands are used for the same purpose in all three regions while others differ. See satellite frequency bands and optical bands.

Higher Frequencies
Frequencies above 40 GHz have not been licensed, but are expected to be made available in the future as the technology is developed to transmit at these smaller wavelengths (higher frequencies). The spectrum can be viewed in meticulous detail from the Federal Communications Commission (FCC) and National Telecommunications and Information Administration (NTIA) by visiting www.fcc.gov/oet/spectrum and www.ntia.doc.gov/osmhome/osmhome.html. See electromagnetic radiation and wave.

There is a great deal of controversy over the licensing of frequencies. In Kevin Werbach's very educational white paper, "Radio Revolution," the author says an artificial scarcity has been created because policy makers do not understand the technology. He states that many believe the traditional policy of dividing the airwaves into licensed bands now impedes progress because today's radio technologies allow for much more sharing of the spectrum than ever before. The old notion that radio waves interfere with and cancel each other is a false one. Waves just mix together and become more difficult to differentiate, but modern electronics can, in fact, separate them.

To obtain a copy of this insightful report written in 2003, as well as other related articles, visit Werbach's website at www.werbach.com. See smart radio.