Under normal conditions, each eye views a three-dimensional object at a different viewing angle. The image that appears on the retina of one eye differs somewhat from the image on the retina of the other eye. These images are disparate, that is, their contours do not coincide when one image is superimposed on the other. The transverse disparity, that is, the shift of contours along a line connecting the pupils of both eyes, creates a natural, physiological, 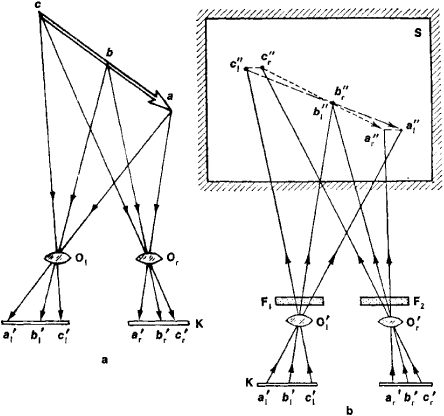 left image of a stereopair on the film,

right image of a stereopair on the film, (S) projection screen,

left image on the screen

right image on the screen

stereoscopic effect. Because of this effect, a human being can visually determine an object’s spatial position relative to other objects and its three-dimensional properties, relief characteristics, and certain other external features.

Stereoscopic motion pictures enable the viewer to see on the screen two separate images of the same object, photographed from two different points, with only one image seen by each eye. This result is achieved by stereoscopic methods of cinematography and by the use of stereoscopic projection equipment. Stereoscopic cinematography is, in essence, an imitation of the phenomenon of binocular vision. Stereopairs of disparate images are consecutively fixed on the motion-picture film (Figure l,a). They contain information about the three-dimensional characteristics of the object being filmed. In order to reproduce a stereoscopic film, two objectives simultaneously project the conjugate frames onto the screen, with one frame superimposed upon the other (Figure 1 ,b). An optical separating device must be used to view a three-dimensional picture. This device separates the images intended for the right and left eyes. Such devices are intended for either individual or collective use.

Note to Figure 2: Viewing of a stereoscopic image through separating eyeglasses. On the screen (E), the left eye (LE) of the viewer sees through a filter

, and the right eye (RE) sees through a filter

The operating principle of individual separating devices consists in the selection of light fluxes—either spectral, polarization, or time selection. In spectral selection, the two stereoscopic images are colored in complementary colors; they are viewed through eyeglasses having two differently colored lenses of the same colors as those of the images. As a result, each eye sees its own image of the object appearing on the screen.

Figure 2 shows how a viewer perceives a three-dimensional picture by viewing the two differently colored images of a stereopair through separating eyeglasses. The polarization method of image selection is similar to the spectral method, except that the light fluxes are separated by polarized filters. In time selection, the two conjugate images of a stereopair are projected onto the screen consecutively in time. Eyeglasses with shutter mechanisms are positioned in front of the viewer’s eyes. The shutters open alternately in synchronism with the projection of the corresponding stereoscopic image on the screen. This method of stereoscopic projection has several drawbacks and has not been widely used.

Stereoscopic screens of the raster type are used as separating devices for collective three-dimensional viewing. Such screens generate regions in a plane at the eye level of the viewer, where only the right or only the left image of a stereopair can be seen. These regions, called focal zones, fan out from a common center (Figure 3,a). The width of the zones increases with greater distance from the screen. This limits the usable length of the auditorium: where the width of a zone is greater than the distance between the pupils of the viewer’s eyes, both eyes will be located in a common focal zone of the same image; where the width of two adjacent zones is less than the interpupillary distance, the viewer sees only a two-dimensional image.

An improved method of projection onto a raster screen is the stereoscopic multi-image projection method (seeINTEGRAL STEREOSCOPIC MOTION PICTURES). In this method, many images of the same object, filmed from many, successively located viewing points, are projected onto the screen, creating a multitude of adjacent focal zones in the auditorium. If the viewer moves his eyes from one pair of zones into another pair, he perceives a gradual change in the viewing angle of the object filmed (Figure 3,b). Holographic methods of projecting stereoscopic motion pictures are also being developed.

Figure 3. Focal zones in an auditorium, shown for two methods of stereoscopic projection that do not require the use of eyeglasses: (a) single-image method, (b) multi-image method. (L—R) and (1 6) are the focal zones formed by the stereopairs (L—R), (1—2), (2—3),, . ., (5—6). (S) is the screen. Short, heavy lines indicate the inter-pupillary distance (65 mm) for viewers at various locations in the auditorium.

The advantages of stereoscopic motion pictures include the lifelike reproduction of the three-dimensional shape of objects and the shininess, texture, illumination, and color of surfaces. The structure and shape of objects presented against inadequately contrasting backgrounds can also be shown.

Beginning in the late 19th century, many inventors attempted to create stereoscopic motion pictures. In 1928, E. Noaillon of Belgium showed that in principle it was feasible to achieve a stereoscopic motion-picture projection without the aid of eyeglasses by using a raster screen. However, his system and those of other inventors were very complex and found no practical applications.

Feedback
Flashcards & Bookmarks ?
Please log in or register to use Flashcards and Bookmarks. You can also log in with
Flashcards ?
My bookmarks ?
+ Add current page to bookmarks
TheFreeDictionary presents:
Write what you mean clearly and correctly.
Mentioned in ?
References in periodicals archive ?
Stereoscopic motion pictures are finally here to stay, and for that, Rodriguez deserves partial credit (or blame, depending on your perspective).
Robert Rodriguez's Spy Kids 3-D: game over and the 3-D resurgence
I have been interested in stereoscopic motion pictures since I saw my first Peter Smith special with red and green glasses many years ago, so I was astounded by Cyberworld.
The art of stereoscopic motion pictures will evolve out of its truth -- its potential for content and story.
Cyber World in IMAX 3-D