[′stərn ′zärt·mən ik‚sper·ə·mənt]
(statistical mechanics)
An experiment in which the distribution in speed of atoms or molecules in a beam emitted from an opening in an oven is measured by having the beam impinge on a rotating cylindrical drum, with a slit cut parallel to the drum axis, and measuring the density of atoms or molecules deposited on the inner surface of the drum, roughly opposite the slit, as a function of distance from a point directly opposite the slit; it is used to test the Maxwell-Boltzmann distribution law.

(in Russian, called the Stern experiment), an experimental determination of the speeds of gas molecules in thermal motion. It was first carried out by O. Stern in 1920. The Stern-Zartman experiment confirmed the validity of the foundations of the kinetic theory of gases.

The gas studied in the experiment was a rarefied silver vapor, which was obtained by vaporizing a silver coating from a platinum wire heated by an electric current. The wire was placed in a vessel from which air had been evacuated, so that the silver atoms freely escaped from the wire in all directions. To obtain a narrow beam of escaping atoms, a barrier with a slit, through which the atoms impinged on a brass plate maintained at room temperature, was set up in the path of the escaping atoms. The silver atoms were deposited on the plate as a narrow band, forming a silver image of the slit. A special device was used to set the entire apparatus in rapid rotation about an axis parallel to the plane of the plate. As a result of the rotation of the apparatus, the atoms impinged on another site on the plate because the plate shifted as the atoms traversed the distance l from the slit to the plate (see Figure 1). 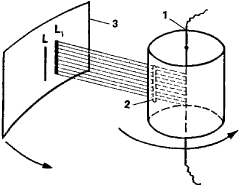 The shift of the plate increases as the angular velocity co of the apparatus increases and decreases as the speed v of the silver atoms increases. If ω and l are known, v may be determined. Since the atoms move with different speeds, the band spreads and becomes broader as the apparatus rotates. The density of the silver deposit at a given point of the band is proportional to the number of atoms moving with a given speed. The maximum density of the deposit corresponds to the most probable velocity of the atoms.

The values obtained in the Stern-Zartman experiment for the most probable velocity were in good agreement with the theoretical values obtained on the basis of the Maxwellian distribution of molecules over velocities.