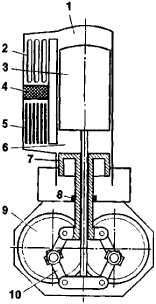 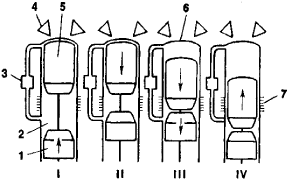 [′stir·liŋ ‚en·jən]
(mechanical engineering)
An engine in which work is performed by the expansion of a gas at high temperature; heat for the expansion is supplied through the wall of the piston cylinder.
McGraw-Hill Dictionary of Scientific & Technical Terms, 6E, Copyright © 2003 by The McGraw-Hill Companies, Inc.

Feedback
Flashcards & Bookmarks ?
Please log in or register to use Flashcards and Bookmarks. You can also log in with
Flashcards ?
My bookmarks ?
+ Add current page to bookmarks
Mentioned in ?
References in periodicals archive ?
In addition, a helium gas bearing closed-cycle Stirling cryocooler, shown in Figure 5, is used.
Targeted mean time to failure for the helium gas Stirling cryocooler is 40,000 hours.
Practical HTS/cryogenic systems for wireless applications