an electron tube used to record, store, and subsequently reproduce on a phosphor screen information received as electric signals at the input electrode of the instrument. The writing electron beam of the tube is modulated by the signal to be recorded (Figure 1). The beam, in moving over the target, displaces secondary electrons from the target’s dielectric surface and generates a variable potential on this surface. The variations in potential are proportional to the intensity and duration of the beam. 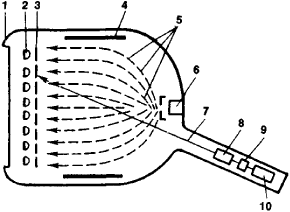 Visual storage tubes are used for observation of momentary or rarely repeated signals in, for example, oscillographs, radar screens, and data output devices of electronic computers. In oscillographs, the luminous intensity of storage tubes is between 2 and 150 candles per square meter. The resolution, determined by the number of lines across either the diameter or any side of the image on the screen, is between 60 and 200. The reproduction time is from 1 to 600 minutes. For storage tubes used in radar equipment, these figures are, respectively, 100–5,000 candles per square meter, 150–600 lines, and 0.2–2.0 minutes.

The term “storage tube” can be applied to any cathode-ray storage tube. Since the 1970’s, the latter term has come to be preferred.