in the broad sense, the ability of solids to resist fracture (separation into parts) or an irreversible change in shape (plastic deformation) under the action of external loads. In the narrow sense, strength of solids is understood as resistance to fracture.

Depending on the material, type of stress (tension, compression, bending), and the operating conditions (temperature, duration of the action of the load), various measures of strength have been adopted in technology (yield point, ultimate strength, endurance limit). Since the fracture of a solid is a complex process, dependent on the factors mentioned above as well as on many others, the technical measures of strength are conventional values and cannot be regarded as comprehensive indexes.

Physical nature of strength. The strength of solids derives, in the final analysis, from the forces of interaction between the atoms and ions making up the solid. These forces depend primarily on the position of the atoms in relation to one another. For example, the force of interaction between two adjacent atoms, neglecting the effect of surrounding atoms, depends only on the distance of the atoms from each other (Figure 1). At the equilibrium internuclear distance r0, which is equal to approximately 10 nanometers, or 1 angstrom, this force is zero. At shorter distances, the force is positive and the atoms repel each other; at longer distances, the atoms attract each other. At the critical distance rc, the absolute value of the force of attraction is at its maximum and is equal to Fa. For example, if upon stretching a cylindrical rod of cross section S0 the force P directed along the rod’s axis is such that the external force acting on a given pair of atoms exceeds the maximum force of attraction Fa, these atoms will freely separate. However, in order for a crack to appear along some surface of a solid, all the atom pairs arrayed along the crack must experience a force exceeding Fa. The stress corresponding to the force Fa is called the theoretical tensile strength σT ≈ 0.1E, where E is Young’s modulus. However, it is found by experiment that fracture is observed at a load P* corresponding to a stress σ = P*/S, which proves to be less than σT by a factor of 100–1,000. This discrepancy between theoretical and actual strength is explained by irregularities in the solid’s structure, such as grain boundaries in polycrystalline materials and extraneous inclusions, which cause an unequal distribution of the load P over the body’s cross section. 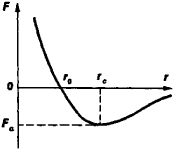 Figure 1. Dependence of the force of interaction of two atoms on the distance between them

Mechanism of fracture. The appearance of a microfissure at a stress below σT is facilitated by thermal fluctuations. If on a small surface element S, whose dimensions far exceed the cross section of an atom, the local stress is greater than σT, the surface of this element will rupture. The edges of the rupture separate to a distance greater than rc; here, the interatomic forces are small, and a crack is formed (Figure 2). The local stresses are especially large at the edge of the crack being formed, where stress concentration occurs, and these stresses increase with the size of the crack. If the size of the crack is greater than some critical rc, then a stress in excess of σT acts on the atoms at the edge of the crack, the crack increases rapidly across the entire cross section of the solid, and fracture occurs. The value of rc is determined from the condition that the elastic energy of the material liberated during the growth of the crack covers the expenditure of energy in the formation of the new surface of the crack: rc ≈ Eγ/σ2, where γ is the energy per unit area of the material.

Before an increasing external stress attains the value required for fracture, separate groups of atoms, especially those constituting the defects in crystals, usually undergo rearrangements through which the local stresses are reduced (stress relaxation). As a result, an irreversible change in the shape of the solid, called plastic deformation, occurs. Thermal fluctuations also serve to bring about this change. Fracture is always preceded by a greater or lesser plastic deformation. Thus, in evaluating rc, the work of plastic deformation γp, which is usually several orders of magnitude greater than the actual surface energy γ, should be included in the surface energy. If the plastic deformation is great not only near the fracture surface but also in the bulk of the body, the body is said to be ductile. Materials for which fracture occurs without noticeable traces of plastic deformation are said to be brittle. The nature of the fracture is seen in

Figure 2. Griffith crack with arrows indicating the direction of tensile stress and shaded areas showing where the stress is relieved

the structure of the break surface when irradiated by the methods of fractography. In crystalline solids, shearing along the crystallographic cleavage surfaces corresponds to brittle fractures, whereas coalescence of microcavities (seen as small cups in the fractographic image) and slipping characterize ductile fractures. The temperature at which the fracture changes from ductile to brittle is called the brittle temperature.

Inasmuch as fracture is a process involving the appearance and growth of cracks, it is characterized by a rate or a time τ from the moment of the application of the load until the moment of fracture, that is, by the lifetime of the material. Studies of many crystalline and amorphous solids have shown that over a wide range of absolute temperatures T and stresses σ applied to a sample, the lifetime τ under tensile stress is determined by the formula

where τ0 is approximately equal to the period of the atomic thermal vibrations in the solid (10-12 sec), U0 is an amount of energy close to the material’s sublimation energy, V is the activation volume, which usually encompasses several thousand atomic volumes and depends on the material’s structure as formed through prior thermal and mechanical treatment and under the effect of the load, and k= 1.38 × 10-16 erg/deg is Boltzmann’s constant. At low temperatures, the lifetime drops sharply with increasing stress such that for any values of τ of practical significance, there is an almost constant limiting value for the stress σ0, above which the sample fractures instantaneously and below which the sample survives indefinitely. This value for σ0 may be considered the ultimate strength (Table 1).

Time τ is necessary for the appearance of microfissures from thermal fluctuations and the growth of the microfissures to the critical size rc. When a stress σ is applied to a sample, the sample first undergoes elastic deformation and then plastic deformation. Near the structural irregularities, which are either present originally or arise during plastic deformation, large local stresses appear in the process (in crystals, they appear at the head of restrained dislocations, that is, in clusters of dislocations). These irregularities are the sites at which microfissures appear, and the concentration of microfissures can be exceedingly high. For example, in certain stereospecific polymers, there can be up to 1015 fissures/cm3. However, the sizes of the microfissures, which are limited by the characteristic size of the structural irregularities, are significantly smaller than rc. The cracks do not grow and the solid does not fracture until, for example, by chance one of the cracks reaches the critical size through the successive coalescence of closely spaced neighboring microfissures. Thus, in the manufacture of strong materials, care must be taken to prevent the growth of cracks rather than their appearance.

The random distribution of structural irregularities in the bulk of the sample, differences in size and degree of strength of the irregularities, and the random nature of the thermal fluctuations lead to a spread of values in tests of identical samples under given values of σ and T for the fracture time as well as for the ultimate strength σ0. The probability of encountering a “weak spot” in the sample increases with the volume of the sample. Thus, the strength (fracturing stress) of small samples, such as thin filaments, is greater than that of larger samples of the same material because of the scale effect. Segments with increased stress, where microfissures are more easily formed, are found more frequently near the surface (protrusions and scratches). Polishing of surfaces and protective coatings will therefore increase the strength, and corrosive mediums will lower it.

Means of increasing strength. In producing high-strength materials, a prime consideration is increasing the resistance to plastic deformation. In crystalline solids, increased resistance is achieved either by reducing the density of the defects (the strength of needle crystals without mobile dislocations approaches the theoretical value) or by a maximum density of dislocations in finely divided materials. A second requirement of high-strength materials is a high resistance to fracture, a requirement that leads to a selection of materials with high theoretical tensile strength σT = 0.1E. The production of materials with a Young’s modulus greater than the maximum values found in nature is possible through artificial methods involving the application of high pressures; however, this type of production is still in an early stage of development. High values of σT hamper the appearance of microfissures. In order to prevent the growth of microfissures, the material must be sufficiently ductile. Then, the large stresses at the apexes of the microfissures are dissipated through plastic deformations. The combination of high strength and ductility is achieved in alloys by thermomechanical treatment and in composite materials by selecting the proper materials for the fibers and matrix and the proper volume fraction and size for the fibers. A crack appearing in a strong (usually brittle) alloy phase or in a fiber of a composite material stops at the boundary with the ductile matrix. Thus, an important characteristic of high-strength materials is resistance to the spread of cracks, or fracture ductility. The reduction in strength required for the mechanical grinding of materials is achieved through the action of such surface-active mediums as organic substances and water.