[′strip tranz′mish·ən ‚līn]
(electromagnetism)
A microwave transmission line consisting of a thin, narrow, rectangular metal strip that is supported above a ground-plane conductor or between two wide ground-plane conductors and is usually separated from them by a dielectric material.
McGraw-Hill Dictionary of Scientific & Technical Terms, 6E, Copyright © 2003 by The McGraw-Hill Companies, Inc.
The following article is from The Great Soviet Encyclopedia (1979). It might be outdated or ideologically biased.

in microwave technology, a plane ribbon-like structure that channels electromagnetic waves through air or some dielectric medium along two or more conductors that have the form of thin strips or plates. Like the two-wire line and coaxial cable, the strip transmission line is a type of waveguide. Copper, alloys with high conductivity, silver, and, less often, gold are used as the electrically conducting material in the strips and plates, while fluoroplastics, polyethylene, devitrified glass, ceramics, and other materials with low energy losses in the microwave region and with high permittivity (up to 20) are used as the dielectric. 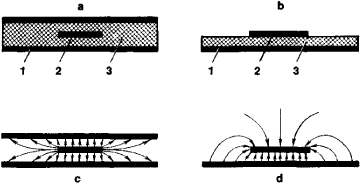 Figure 1. End views of strip transmission lines: (a) and (c) symmetric, (b) and (d) asymmetric; (1) ground plates, (2) metal plates, and (3) dielectric. Arrows indicate the force lines of the electric field.

Many components of microwave equipment, such as directional couplers (Figure 2,a), power dividers (Figure 2,b), electrical filters, and detecting and mixing wave-guide mounts, are based on strip transmission lines. Such lines are the only type of microwave transmission lines that permit the comprehensive miniaturization of electronic devices and the manufacture of microwave devices in an integrated design. Miniature lines known as microstrip lines are used in hybrid integrated circuits.

Among the advantages of strip transmission lines and various devices based on them is the possibility of automating their production through thin-film technology and of manufacturing, in separate operations with similar technology, printed circuits that feature low labor intensiveness, greater reliability, and 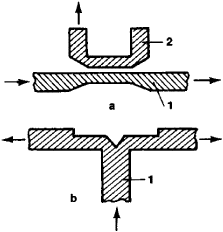 Figure 2. Top view of the metal strips of a directional coupler (a) and power divider (b) on strip transmission lines: (1) metal strips of the main line and (2) metal strip of the auxiliary line. Arrows indicate the direction of propagation of the electromagnetic waves.

readily reproducible characteristics. Other advantages are the comparative simplicity of manufacturing certain devices using strip transmission lines, the possibility of precision work in manufacturing technologically intricate, functional assemblies, and the small size and low weight of strip transmission lines. Among the drawbacks are the inability of such lines to be used except when the microwave oscillations have low or medium power, the difficulty of tuning the frequency of devices with mechanical frequency control, and the complexity of measuring parameters.