(also called equilibrium diagram or phase diagram), a graphic representation of the relations between the structural parameters of a physicochemical system (such as temperature and pressure) and its composition. In the simplest case, when the system consists of only one component, a structural diagram is a three-dimensional figure constructed along three perpendicular coordinate axes, along which the temperature T, the pressure p, and the molar volume v are plotted. The use of a three-dimensional structural diagram is inconvenient because of its unwieldiness; there-fore, a projection of a structural diagram onto one of the coordinate planes, usually the p-T plane, is used in practice.

The structural diagram of carbon dioxide, CO2, is shown (not to scale) in Figure 1 as a very simple example. Any point of the structural diagram (a figurative point) depicts the state of CO2 at the temperature and pressure that correspond to the point. The point O (the triple point) corresponds to equilibrium of the three phases—solid, liquid, and gaseous CO2. The three curves intersect at point O: OA (the volatilization curve), which corresponds to equilibrium between the solid and gaseous CO2; OC (the evaporation curve), which corresponds to equilibrium between liquid and gaseous CO2; and OB (the melting curve), for solid and liquid CO2. The curves divide the plane of the diagram into three fields, which are the domains of the three phases: the solid phase S, the liquid L, and the gaseous G. The point C corresponds to the critical temperature of CO2 (31.0°C), at which the difference between the properties of liquid and gas disappears. According to the terminology of the phase rule, invariant equilibrium corresponds to O; monovariant equilibrium, to the points on curves OA, OB, and OC; and divariant equilibrium, to the points in the fields S, L, and G. In the case of polymorphism the structural diagram grows complicated—the number of triple points is equal to the number of polymorphous trans-formations. (SeeBINARY SYSTEMS for structural diagrams of systems with more than one component.) 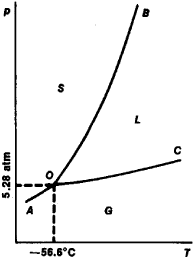 Feedback
Flashcards & Bookmarks ?
Please log in or register to use Flashcards and Bookmarks. You can also log in with
Flashcards ?
My bookmarks ?
+ Add current page to bookmarks
Mentioned in ?
References in periodicals archive ?
The committee had produced a structural diagram to illustrate how the groups and sectors of NZNO worked together to help members understand how the organisation worked.
Hui a-tau 'a safe place'
The structural diagram of the local subsystem performing functions of collection and preprocessing with the subsequent transmission of the telemetric information to the control office is showed in a figure 3.
System of Protection and Diagnostics of Structural Elements of Support of High-Voltage Power Lines
A structural diagram of the sample and the finished sample is shown in Figure 11.
Experimental Study on Explosion Pressure and Rock Breaking Characteristics under Liquid Carbon Dioxide Blasting
Using equations (3), we construct a structural diagram of a system in the state space (Fig.
Structural synthesis of a stabilizing robust controller of the rotor flux linkage
Structural diagram of the autooperator: 1, 4--Gear motor; 2--Transport belt; 3--Traverse; 5--Electrical cupboard
Development of control system for automated manipulator/Automatinio manipuliatoriaus valdymo sistema
The result is a structural diagram that may look like a traditional org chart, but has a different intent.
Designing for change
Another example for the Aspectual structural diagram is the Aspectual Package Diagram.
Comprehensive Aspectual UML approach to support AspectJ
For his part, Al-Subeeh said that the municipality continues its responsibility toward preserving the historical identity and heritage of the country through creating a special department for the country's structural diagram and the implementation of some projects such as renovating Souk Al-Mubarikiya.
Industries, Construction Exhibition begins
The Minister of Planning and Urban Development at Khartoum State Engineer Abdallah Ahmed Hamad explained to SUNA that Suba bridge was the most important one in the group of the bridges the state plans to establish as it absorbs the traffic of heavy trucks from and to Port Sudan, adding that the construction of the bridge comes in completion of the general structural diagram of the state for the coming century-quarter
Dr. Nafie to launch start of work in Suba bridge Saturday
Structural diagram of two--mass electromechanical system optimization
Optimization of two-mass electromechanical system/Dvimases elektromechanines sistemos optimizavimas
It's a very preliminary version of a structural diagram for the eventual plan.
Skeletal framework begs agency question