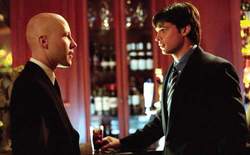 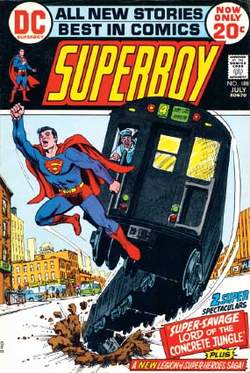 Superman was approaching his seventh birthday in 1945, and he had proven himself a phenomenal sales success as the star of Action Comics, World’s Finest Comics, and his own title. Beginning with More Fun Comics #101 (January-February 1945), publisher DC Comics found a new way to milk its Kryptonian cash cow— “The Adventures of Superman When He Was a Boy”—Superboy!

When Superman first took flight in Action Comics #1 (June 1938), creators Jerry Siegel and Joe Shuster established that this “strange visitor from another planet” had delayed his crime-fighting career until adulthood, upon the death of his adopted Earth parents. Funny how the prospect of exploiting a lucrative franchise can inspire reinvention: With Superboy, Superman’s origin was retrofitted to offer readers a pint-sized superhero. The Superboy series, backdated roughly a dozen years from the Man of Steel’s adventures, took the hero who would one day protect the bustling city of Metropolis and plunked him down in a hick town, appropriately called Smallville. Enthusiastic younger readers made Superboy a hit, and the hero burst out of More Fun into the lead spot in Adventure Comics and his own long-running title.

The basic story of Superboy remained the same as Superman’s: Childless Jonathan and Martha Kent discover a humanoid baby in a crashed rocketship and adopt him as their son, Clark, guiding him to use his otherworldly powers (flight, superstrength, invulnerability, superspeed, supervision, superhearing, and, yes, superbreath) to benefit humankind—but then the variations began. Superboy’s blue-and-red suit was sewn by “Ma” Kent from the very blankets into which the infant was swaddled. He frolicked about the sky with another survivor of Krypton, his superdog Krypto. Lana Lang, not Lois Lane, was his headstrong female companion (and neighbor). Instead of an Arctic Fortress of Solitude, the Boy of Steel operated out of a secret headquarters underneath the Kents’ modest home.

Initially, Superboy appeared to be a pre-teen, but before long the series writers made him a teenager at Smallville High School. Young Kent perfected his “mild-mannered” persona to deflect any suspicion of his S-chested identity, but that didn’t fool nosy Lang, who spent years trying to prove that the boy next door was the Boy of Steel. Teenage Kent struck a more resonant chord with the readership than his adult counterpart: His angst closely mirrored the growing pains experienced by his readership. While the writers expertly characterized young Kent, they rarely explored the Boy of Steel’s immaturity with his superpowers—Superboy was essentially Superman in a smaller package.

By the 1960s, Superboy had developed a rogues’ gallery including Bizarro, the Kryptonite Kid, and classmate-turned-evil-scientist Lex Luthor, who blamed Superboy for the permanent loss of his hair (!). He regularly encountered a bevy of young superfriends, most notably the Legion of Super-Heroes, a club of teen champions from a thousand years in the future. Youthful versions of a pre-Batman Bruce Wayne, Aquaman, Green Arrow, and Lois Lane even stopped by Smallville, as did the time-traveling Robin the Boy Wonder and a cadre of other crusading kids in one-shot appearances.

Superboy never matched the ubiquitous merchandising muscle of Superman, but a handful of items bearing his likeness have been produced over the years, from a model kit and board game in 1966, to an action-figure two-pack with Supergirl in 2002. On four occasions, the Boy of Steel has starred in television series: in The Adventures of Superboy, an unsold pilot (1960) starring Johnny Rockwell; in Filmation Studios’ 1966 Superboy animated cartoon (part of The New Adventures of Superman series); in the live-action Superboy syndicated program (1988–1992), starring John Haymes Newton in season one and Gerard Christopher in the remaining three seasons; and in Smallville, the highly acclaimed live-action, teen-oriented, hour-long WB network drama that premiered in 2001 and updated the Superboy legend (sans costumed identity), with a young Clark Kent (Tom Welling) on a journey of super-discovery.

Superboy was expunged from DC Comics’ continuity in 1986, in writer/artist John Byrne’s Man of Steel miniseries, which re-established Superman’s inaugural appearance as transpiring during the hero’s adulthood. In the aftermath of DC’s highly publicized “Death of Superman” storyline in 1992, a new Superboy—a cloned proxy for the deceased Man of Steel—was introduced in Adventures of Superman #500 (1993). Kryptonian DNA doesn’t lend itself to replication, discovered the geneticists at Metropolis think tank Project Cadmus, so their test-tube titan was cloned from heritable matter from Paul West-field, the head of Project Cadmus, and programmed to parrot Superman’s powers. Superboy’s abilities are accredited to “tactile telekinesis”: He can fly, he is invulnerable, and he is strong like the Man of Steel, but he also commands the power to disassemble any object. After Superman returned from the grave, he accepted “The Kid” (as Superboy is often called) into his super-”family,” bestowing upon him the Kryptonian name of Kon-El. Hip, brash, and fashion-conscious, this Superboy starred in a healthy run of his own title from 1994 to 2002, as well as the short-lived spinoff Superboy and the Ravers. Superboy was a member of Young Justice before settling, in the summer of 2003, into the roster of a revamped Teen Titans.

In Teen Titans Vol. 3 #1 (September 2003), it was revealed that Kon-El was not an altered clone of Project Cadmus head Paul Westfield, but was a hybrid of DNA from both Superman and his human nemesis Lex Luthor. Kon-El adopted a secret identity as Conner Kent.

The estate of the late Jerry Siegel attempted to gain control of the rights to Superboy, asserting that Siegel had proposed the character to DC in the 1940s, that DC had rejected Siegel’s pitch, but then used the character anyway, without his permission. In 2006, a court awarded the rights to the Superboy name to the Siegel estate; DC then avoided using the Superboy name. Significantly, Kon-El was killed off in Infinite Crisis (2005–2006). However, in 2007 the previous court decision was reversed, in 2008 DC began using the Superboy name once more, and Kon-El returned from the dead in 2009.

In 2011, Smallville wrapped after ten seasons, thus becoming both the longest running science fiction series and the longest running superhero series ever produced for American television. In the final moments of the last episode, Clark at last adopts the costume and identity of Superman and is shown flying. In September 2011, DC Comics began publishing a new monthly Superboy comic book starring Kon-El, written by Scott Lobdell and drawn by RB Silva. —ME & PS

Feedback
Flashcards & Bookmarks ?
Please log in or register to use Flashcards and Bookmarks. You can also log in with
Flashcards ?
My bookmarks ?
+ Add current page to bookmarks
Mentioned in ?
References in periodicals archive ?
While there have been portrayals of twisted Supermen before-an alternate-reality villain version (Ultraman), a psychopathic teenager (Superboy Prime) and the Kryptonite-altered film version (in 'Superman III'), among others-'Brightburn' gives its main character an adequate backstory, a brutal origin that shocks from time to time, no matter how predictable it gets.
Superman lore radically reimagined in 'Brightburn'
It promises an epic duel storyline, with Superboy and Robin finding themselves targets of an interstellar team of young rebels called the Gang.
ALL GEEK TO ME; THE LATEST GAMING, COMICS & TECH TRENDS
Yep, if this show charting his earlier life has taught us anything, it's that Superboy hasn't had the easiest time of it throughout his adolescent years.
SATURDAY
But Ferrie was five under after scores of 68 and 67 and, at one stage, looked as if he might go into a two-man showdown for the tenth and last spot with Italian superboy Matteo Manassero on 135.
Play-off is just out of reach; Ferrie produces best form of season in qualifiers
The club's youngest ever player, having made his 1970 debut aged 16 years, 139 days, he was nicknamed 'Superboy' and although he was born in Plymouth, Bluenoses will consider him their own after he came through the ranks.
THE BEST EVER MIDLANDS XI.. CALLING ALL FOOTBALL FANS: WE WANT KNOW JUST WHO SHOULD MAKE IT INTO
John Haymes Newton Superboy TV series (1988-1989) Plays gay cable guy Jonathan Lithgow on Desperate Housewives.
What I learned from superman; with Superman Returns headed at us faster than a speeding bullet, Advocate arts and entertainment editor and lifelong comics fan Alonso Duralde looks at superheroes and their appeal to gays and lesbians
Enter Oyborg, former teen hero and self-proclaimed trainer of new recruits Robin, Superboy, Wonder Girl, and Impulse.
A new generation of superheroes!
The "new" Teen Titans consist of the core of Young Justice--Wonder Girl II, Kid Flash II, Superboy II, and Robin III--as well as four members of the 1980s Titans--Raven, Starfire, Cyborg and Beast Boy.
Johns, Geoff. Teen Titans: A Kid's Game
The logic is precisely the same as that of Superman, Clark Kent, and Superboy.
Jesus in Smallville: the myths of Jesus' childhood. (Physician-Assisted Suicide, Pro and Con)
He has also written episodes for over 12 different television series, including Star Trek ("The Trouble With Tribbles"), Star Trek Animated, Twilight Zone, Land of the Lost, Superboy, Babylon 5, Sliders, Logan's Run, and Tales From The Darkside.
To be or naught to be +