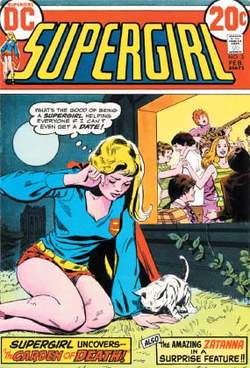 It … uh … must be an illusion!” stammers Superman as he witnesses “a youngster flying, dressed in a supercostume,” zipping from a crashed spaceship. It’s Supergirl, the cousin of Superman, arriving on Earth in Action Comics #252 (May 1959). Superman discovers that this ebullient, golden-haired teen is Kara, a survivor from his homeworld of Krypton. When the planet exploded years ago—the horrific event that led to baby Superman being sent to Earth—the entire megalopolis of Argo City survived, hurled from the explosion and existing on a chunk of planetary debris. As a meteor shower decimates the floating city and its populace, scientist Zor-El—brother of Jor-El, Superman’s biological father—rockets his daughter Kara to Earth to join her cousin. Given the tragedy from which she has just emerged, Supergirl’s giddiness seems rather callous, as she soars about in a blue-skirted version of Superman’s uniform, but this was a time of innocence for publisher DC Comics’ characters.

Superman concealed Kara’s existence from the world, covertly instructing Supergirl on how to use her powers (slightly weaker versions of his own). Disguising herself with a brunette wig and taking the Earth name Linda Lee, Supergirl resided at an orphanage in the hamlet of Mid-vale, eventually being adopted by the Danvers family. After almost three years (in real time) of laboring in the shadows as her cousin’s secret weapon, Supergirl was introduced to the world by Superman in a televised ticker-tape parade in Action #285 (February 1962).

Throughout the 1960s, Supergirl starred as the backup strip in Action Comics, sometimes cover-featured as a guest star to her top-tiered cousin. Unmistakably, the character was created as an attraction for young girl readers, and while most boys reading comics shunned DC’s Wonder Woman title, they read Supergirl’s stories since they shared space in Action with the immensely popular Man of Steel. Supergirl soon had her own supporting cast—Linda Lee Danvers’ boyfriend Dick Malverne, her adopted parents, Streaky the Super-Cat, and Comet the Super-Horse, plus the thirtieth century’s Legion of Super-Heroes, particularly member Brainiac 5, who carried a torch for the Girl of Steel—but the super-cousin herself never quite evolved past second-banana status. Her Action stories were lighthearted fluff, generally dealing with teen-age heartache or a campus-based mystery. In June 1969, Supergirl assumed the lead spot in Adventure Comics, but despite frequent costume changes (including a hot pants ensemble she donned for most of the 1970s) and two attempts at headlining her own title, it became obvious to readers that she had never really developed her own personality. Still, publisher DC Comics kept the character in print in one fashion or another, trading on her licensing potential through a variety of dolls, pencil cases, purses, and other products targeting young girls.

In the early to mid-1980s, Supergirl, having shed her hot pants for a skirt and a headband right out of singer Olivia Newton-John’s “Physical” music video, was headed for the big time—and for disaster. Writer Marv Wolfman, while pitching to DC his twelve-issue comic book opus Crisis on Infinite Earths, suggested that Supergirl be killed to give more emotional resonance to this continuity-reshaping series. Editorial director Dick Giordano agreed, calling Supergirl “Superman with boobs.” The company’s other executives hesitated, as Supergirl was about to star in a summer 1984 movie from the producers of the first three Superman movies. The theatrical Supergirl, featuring Helen Slater in a charming title performance, with Faye Dunaway hamming it up as a campy witch antagonist, tanked at the box office, and the decree was made: Supergirl would die. And she did so, in Crisis #7 (October 1985), valiantly sacrificing herself to save other heroes. By the end of the Crisis series, the Girl of Steel had been removed from the rewritten DC mythology.

In 1986, author/artist John Byrne revamped the Superman legend in his six-issue Man of Steel series, and by 1988, a new Supergirl was introduced. Created from protoplasm in an alternate reality known as the “pocket universe,” Supergirl, originally called “Matrix,” ventured to Metropolis to recruit Superman’s aid in overcoming a menace from back home. Making Earth her adopted planet, the new Supergirl’s career has been fraught with change. After merging her body with that of the dying Linda Danvers, she upped the super-ante by becoming an angel with fiery wings, before morphing yet again, experiencing a makeover into a cutesy blonde with a bare midriff and lace-up boots.

In late 2002, DC Comics came full circle when Supergirl encountered a youngster, flying, dressed in a supercostume, zipping from a crashed spaceship, just as Superman had discovered her in 1959. This was the Kryptonian Super girl Kara, the cousin of Superman and a survivor of Argo City—but from a parallel universe, to which she soon returned. Beginning in the pages of Superman: The 10-Cent Adventure (2003), yet another Supergirl (a buxom babe in a black swim-suit and blue, flowing cape) entered DC continuity, claiming to be the daughter of Superman. These continual changes illustrate what’s right and wrong with the twenty-first-century Superman franchise: While it’s exciting to see new spins on classic themes, frequent reinventions make the continuity so confusing that it is inaccessible for the casual or new reader. That may be why, in early 2004, DC brought back a contemporary version of the “real” Kara Zor-El, best known to the general public and best loved by longtime fans, in issue #8 of the hit Superman/Batman series.

This storyline, by writer Jeph Loeb, reintroducing Kara into official continuity was adapted into the direct to video animated film Superman/Batman: Apocalypse (2010), with Summer Glau (Firefly, Terminator: The Sarah Connor Chronicles) as the voice of Supergirl. The beautiful Laura Vandervoort played Kara in numerous episodes of the live-action TV series Smallville, from 2007 to 2011.

Jeph Loeb was the initial writer on the new Supergirl comics series that began in 2005. In September 2011, DC Comics relaunched the Supergirl comics with a new series written by Michael Green and Mike Johnson, and drawn by Mahmud Asrar.

DC Comics introduced Power Girl, an alternate version of Supergirl from the parallel world Earth-2, in All-Star Comics #58 (January-February 1976). She was created by writer Gerry Conway and artists Ric Estrada and Wally Wood (who endowed her with her famously voluptuous figure). Her Kryptonian name is Kara Zor-L, and she uses the secret identity of Karen Starr. A member of the Justice Society of America, Power Girl later became a team member of Sovereign Seven, in writer Chris Claremont’s creator-owned DC series of that name. Though a popular character, she did not receive her own ongoing comic book series until Power Girl debuted in 2008, initially written by the team of Jimmy Palmiotti and Justin Gray, and drawn by Amanda Conner in her characteristically witty and sexy style. —ME & PS

Feedback
Flashcards & Bookmarks ?
Please log in or register to use Flashcards and Bookmarks. You can also log in with
Flashcards ?
My bookmarks ?
+ Add current page to bookmarks
Mentioned in ?
References in periodicals archive ?
"So their goal is to eliminate the J'onns and the Supermans and the Supergirls of the world along with all the other evil aliens that are out there - they don't make that distinction, which creates an interesting problem for our good guys."
'Supergirl' Sneak Peek: Kara, James Try To Stop Criminals Equipped With Alien Technology
In a (https://twitter.com/florianalima/status/868281725473898496) tweet last May, Lima revealed that her role as Maggie was only meant for one season, so she's excited to continue being part of "Supergirl" even as a recurring guest star in Season 3.
'Supergirl' Spoilers: Alex And Maggie Kiss In New Set Video
Tyler Hoechlin is hoping to reprise his role as Superman in Season 3 of "Supergirl."
Will Tyler Hoechlin Return As Superman In 'Supergirl' Season 3?
Tyler Hoechlin is reprising his role as Superman in Season 2 finale of "Supergirl."
Tyler Hoechlin Is Returning As Superman In 'Supergirl' Season 2 Finale
Floriana Lima was spotted filming an action sequence for an upcoming episode of "Supergirl" around Vancouver's International Village in Chinatown on Friday, April 7.
'Supergirl': Maggie Fights Daxamites In New Set Photos, Videos
Alex (Chyler Leigh) is going to learn more about Maggie's (Floriana Lima) dating history in Season 2, episode 17 of "Supergirl."
'Supergirl': Alex Meets Maggie's Ex In Season 2, Episode 17
Sanvers fans can expect a kissing scene between Alex (Chyler Leigh) and Maggie (Floriana Lima) in Season 2, episode 17 of "Supergirl."
'Supergirl': Chyler Leigh, Floriana Lima Film Kissing Scene For Episode 17 [PHOTOS]
Chyler Leigh and Floriana Lima were spotted filming "Supergirl" in downtown Vancouver on Thursday, Feb.
'Supergirl': Chyler Leigh, Floriana Lima Spotted Filming Season 2, Episode 17
Although Tyler Hoechlin's portrayal of Superman in the first two episodes of "Supergirl" Season 2 was well-received by viewers, fans of CW's DC TV universe shouldn't expect a Man of Steel spinoff anytime soon.
Does The CW Have Plans For A Superman Spinoff?
This week's "Invasion!" may not be CW's last crossover event between "Arrow," "The Flash," "Supergirl" and "Legends of Tomorrow."
'Arrow,' 'The Flash,' 'Supergirl' And 'Legends Of Tomorrow' 2017 Crossover In The Works?
The tension between Lillian Luthor (Brenda Strong) and her foster daughter, Lena Luthor (Katie Douglas), is going to get even worse&nbsp;in Season 2, episode 8 of "Supergirl."
'Supergirl': Brenda Strong On Lillian Luthor, Lena Luthor's Complicated Relationship
Melissa Benoist and Chris Wood were recently spotted filming a couple of scenes together at CBC (Canadian Broadcasting Corporation) Vancouver for an upcoming episode of "Supergirl."
'Supergirl': Kara Looks Upset With Mon-El Again In New Set Photos