the thermal desorption, or evaporation, of positive or negative ions from the surfaces of solids. To achieve a steady emission of ions in surface ionization, the rate of the corresponding ions, atoms, molecules, or radicals striking the surface (owing to the diffusion of these particles from the bulk of the solid or to adsorption occurring simultaneously with surface ionization) should be equal to the total rate of desorption of the ions and neutral particles. Surface ionization also occurs in the evaporation of the solids themselves, as in the case of refractory metals.

The measure of surface ionization is the degree of surface ionization α = vi/v0, where vi and v0 are the fluxes of the simultaneously desorbed ions and neutral particles that are identical in chemical composition; vi = CN exp (–li/kT), while v0 = DN exp (–l0/kT), where k is the Boltzmann constant, T the absolute surface temperature, li, and l0 the heats of desorption in the ionized and neutral states, and N the concentration of given particles on the surface; the coefficients C and D are weakly dependent on T in comparison with the exponents. Hence, α = (C/D) exp[(l0 - li)/kT]. 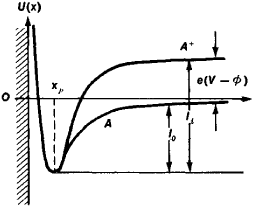 An external electric field E that accelerates the ions from the surface reduces the value of li. When E< 107 V/cm, this reduction ∆l e

electron volts (E should be expressed in V/cm); α increases correspondingly. When li < l0 and vi > v0, E at steady surface ionization reduces N and T0 Thus, T0 for cesium atoms on tungsten when E =104 V/cm is 1000°K and is reduced to 200°K when E = 107 V/cm. This allows the phenomena of desorption and evaporation of ions by an electric field at low temperatures to be considered as surface ionization. Modern experimental technology permits the observation of surface ionization of particles with V ≤ 10 V and S ≥ 0.6 V. With an electric field, these limits may be considerably expanded.

These principles of surface ionization have been confirmed by experiments for uniform surfaces. However, in practice, nonuniform surfaces are most often encountered. On nonuniform surfaces, l0, li, Φ and N are different in different spots. In such cases, the indicated dependence of α on T and E hold only for some averaged values of lo, li, and Φ

Surface ionization is widely used in ion sources of various kinds, in sensitive particle detectors, and when compensating for the space charge of electrons in thermionic converters. It is a promising method for producing plasma engines, as well as a foundation for investigating the physicochemical characteristics of the surfaces of solids and of the particles interacting with these solids.