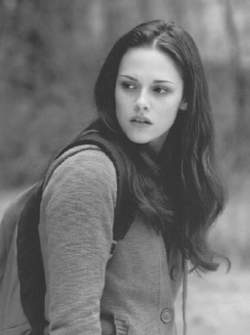 Isabella Marie Swan, also known as Bella or Bells, is Stephenie Meyer‘s heroine and main narrator throughout the four-book “Twilight” series. Bella is described as slender, five foot four inches and fair skinned, with long, straight dark brown hair, brown eyes, and a thin nose. On her website (www.StephenieMeyer.com), Meyer said that she named her female heroine Isabella because she loved the character “like a daughter” and always wanted to give that name to a daughter of her own.

Bella was born on September 13, 1987, and is the only child of Renee and Charlie Swan. She was born in Forks, Washington and her parents divorced when she was six months old. Bella and her mother moved to Phoenix, Arizona, and when Renee remarried Phil Dwyer, Bella moved back to Forks to be with her father.

Meyer describes Bella as extremely accident prone and clumsy. Bella avoids sports and dancing; she occasionally bites her fingernails and feels as if she doesn’t “fit in” with any social group although she easily makes friends with a few people in Forks. Meyer describes Bella as having a “quiet strength”; she is a bookworm who likes to cook and draw as well as take care of her parents by housekeeping and shopping. Like her vampire boyfriend Edward Cullen, Bella is a loner and says she finds her “true place” only when she is transformed into a vampire and thus becomes a bona-fide member of the Cullens and their extended family.

Bella’s strongest quality is that her mind is closed to Edward’s abilities to read her thoughts. This unusual skill—Bella is apparently the only human whose mind is beyond Edward’s powers—later serves as a “shield” that she can extend to protect her child and others around her. She also has a penchant for danger and habitually stumbles into situations that put her own life at risk. When Edward breaks off the relationship with Bella in New Moon, she decides to deliberately place herself in danger just so she can “hear” his voice. Ironically, these risky situations bring Edward and Bella closer as he repeatedly saves her life and vows to protect her.

Bella’s character experiences several changes as the “Twilight” series progresses. She graduates from high school and begins to assert her newfound adulthood and gradually grows more confident about herself and her relationship with Edward. When she turns into a vampire in Breaking Dawn, she is no longer clumsy and discovers her own physical agility. Meyer has explained that although Bella is physically weaker than others, she eventually develops into one of the most powerful characters in the “Twilight” series. In the movie Twilight and its sequels, Bella is played by actress Kristen Stewart.