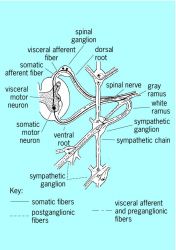 The visceral reflex arc and the sympathetic chain
McGraw-Hill Concise Encyclopedia of Bioscience. © 2002 by The McGraw-Hill Companies, Inc.
The following article is from The Great Soviet Encyclopedia (1979). It might be outdated or ideologically biased.

in vertebrates, including man, a part of the autonomic nervous system consisting of sympathetic nerve centers, the right and left sympathetic trunks (which extend along the spine), ganglia, and nerve branches that unite the ganglia with each other and with the effectors and spinal cord.

The sympathetic nervous system is an efferent system that conducts impulses to various internal organs. Most scientists deny the existence of sympathetic afferent fibers, although many have produced proof of their existence. Sympathetic fibers pass through the abdominal cavity as part of the greater, lesser, and lumbar splanchnic nerves. Afferent nerves, which conduct impulses from internal organs, are represented in the cortex of the large cerebral hemispheres and in the subcortical ganglia.

Sympathetic nerve impulses follow a bineural path from the central nervous system to the organs performing the particular function. The first neuron is located in the lateral horns of the spinal cord. The axons, or processes, of the first neuron (preganglionic fibers) run from the spinal cord, through the ventral roots of the corresponding segments, and into mixed spinal nerves. As constituents of white fibrous branches, the axons extend from the spinal nerves to the corresponding ganglion of the sympathetic trunk, where some of the fibers terminate in synapses on effector neurons; when this happens, each preganglionic fiber is in contact with as many as 30 nerve cells. The other preganglionic fibers pass through the ganglia of the sympathetic trunk without terminating on the cells of the trunk. Together with other fibers these preganglionic fibers form the greater, lesser, and lumbar splanchnic nerves, which enter the prevertebral sympathetic ganglia. Certain preganglionic fibers pass straight through even these ganglia and, reaching the working organ, make a break in the nerve ganglia of the organ’s walls.

The second effector neuron is located in the peripheral sympathetic ganglia. Its processes, which are called postganglionic fibers, enter the innervated organ. The second neuron is located in the paravertebral ganglia or the prevertebral ganglia; the latter include the celiac ganglia and the inferior mesenteric ganglion, which are located at a distance from the central nervous system, near the internal organs. Postganglionic fibers enter a spinal nerve through gray fibrous branches and reach the innervated organ as a constituent of the nerve. Consequently, a break in each efferent sympthetic pathway in the arc closed in the spinal cord happens only once—either in the ganglion of the sympathetic trunk or in ganglia that are at a distance from the spine. In addition to the sympathetic arc closed in the spinal cord, there are also short sympathetic reflex arcs that are closed in the peripheral sympathetic ganglia (of the solar plexus, by the inferior mesenteric).

The influences of the sympathetic and parasympathetic nervous systems on the activity of an organ are often directly opposed to one another. The stimulation of the sympathetic fibers that innervate various organs causes such standard reactions as the acceleration and intensification of the heartbeat, the dilatation of the pupil, mild lacrimation, the contraction of the smooth-muscle fibers (pilomotors) that raise the hairs, the secretion of the sweat glands, the sparse secretion of viscous saliva and gastric juice, and the inhibition of contractions and attenuation of the tonus of the smooth musculature of the stomach and intestine, except the region of the ileocecal sphincter. The stimulation of sympathetic fibers also results in the relaxation of the musculature of the urinary bladder and the inhibition of the contractions of its obturator sphincter, the dilatation of the coronary vessels of the heart, and the stenosis of the small arteries of the abdominal organs, skin, lungs, and brain. Also possible are changes in the excitability of receptors and various sections of the central nervous system and increases in the excitability and the force of contraction and changes in mechanical properties of fatigued skeletal muscle.

[‚sim·pə′thed·ik ′nər·vəs ‚sis·təm]
(neuroscience)
The portion of the autonomic nervous system, innervating smooth muscle and glands of the body, which upon stimulation produces a functional state of preparation for flight or combat.
McGraw-Hill Dictionary of Scientific & Technical Terms, 6E, Copyright © 2003 by The McGraw-Hill Companies, Inc.