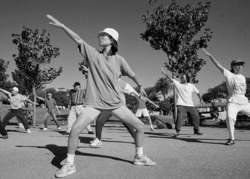 One thousand years ago a "marriage" took place between an ancient philosophical religion and a new martial art. The religion was a unique form of Daoism (see Confucianism/Daoism) called Chi Kung ("excellence of energy"). It was devoted to physical health and peaceful, spiritual growth. But with warlords devastating the countryside and bandits coming down out of the mountains to prey upon the poor and helpless, even peaceful monks needed a way to defend themselves against aggression.

The result of this union, inspired by both peace and war, became known as T'ai Chi Ch'uan, or simply T'ai Chi. The movements of T'ai Chi, often described as "swimming in air," and the mental and spiritual focus required to perform them correctly, free the energies of the body to flow naturally. The physical movement is important, but of much more importance is the mental discipline. Human beings can do amazing things. But they usually don't. The reason, according to the practice of T'ai Chi, is that the energies needed to perform at peak capacity are blocked by negative thoughts and actions. The energy flow becomes dammed up, so to speak, and the resulting flood of health problems and mental fatigue can be overwhelming.

T'ai Chi sought to remove the blockage by letting nature fight the battle. Through martial art exercises it was discovered that the mind could be centered, fully involved in the present moment. When the mind is fully centered, fully at peace, the possibility to change, correct, and heal the body was realized. Change is natural. Everything changes constantly. But the human tendency is to resist change—to meet its force with more force. The resultant collision is typically Western. When someone hits us, we hit back, harder. The martial artist does the opposite. Force is resisted by yielding. The force of the opponent is thus used against him, to throw him off balance.

In the same manner, when illness strikes a blow, the Eastern approach is not to strike back with drugs, but to yield, to "go with the flow," throwing the illness off balance by yielding, allowing it to simply dissipate beneath the natural flow of energy, chi, which is the body's normal defense.

T'ai Chi is a ritual in which daily practice forms the habit of living fully in the moment and "going with the flow." The essence of T'ai Chi is not in learning a set of movements, although it may appear to observers that practitioners are doing just that. Neither is it in learning basic self-defense, although that can happen in the course of study. It is found instead in becoming aware of normal laws of flowing energy, of exploring natural health and wellness. That is why it is common to see, in the parks and public spaces of Chinese cities, people of all ages standing together at dawn and "swimming in air," practicing the movements they have learned, seemingly oblivious to one another. They are not "out there" somewhere. Just the opposite. They are "in here," totally in the moment, focused on the very essence of life, the energy that flows through us all.

Feedback
Flashcards & Bookmarks ?
Please log in or register to use Flashcards and Bookmarks. You can also log in with
Flashcards ?
My bookmarks ?
+ Add current page to bookmarks
Mentioned in ?
References in periodicals archive ?
Although the notion of physical exercise preventing or halting cognitive decline seems to be well supported, most of these findings have been based on studies of cardiovascular exercise and mind-body exercises such as jogging, swimming, or t'ai chi ch'uan. The study of the cognitive benefits of salat prayer, a specific form of physical activity long performed in the Muslim population, is a new field.
Effect of salat prayer and exercise on cognitive functioning of Hui Muslims aged sixty and over
As an incredible guide to the eastern and Asian Ways are an all-together work of unity, Light From The East enlightens its readers to the whole spectrum of Taoism, Zen Buddhism, Hinduism, Yoga, Confucianism, Feng Shui, T'ai Chi Ch'uan, Falun Cong and Shinto perspectives.
Light from the East
Cheng Tzu's Thirteen Treatises on T'ai Chi Ch'uan. Translated by Benjamin Lo and Martin Inn.
Teaching self-reflection and meta-cognition. (Art and Technics)