violent, local atmospheric disturbance accompanied by lightninglightning,
electrical discharge accompanied by thunder, commonly occurring during a thunderstorm. The discharge may take place between one part of a cloud and another part (intracloud), between one cloud and another (intercloud), between a cloud and the earth, or earth and
..... Click the link for more information. , thunderthunder,
sound produced along a path of a lightning flash, caused by the rapid heating and expansion of the adjacent air; lightning can heat air to temperatures as much as five times hotter than those at the surface of the sun.
..... Click the link for more information. , and heavy rain, often by strong gusts of wind, and sometimes by hailhail,
precipitation in the form of pellets composed of ice or of ice and snow, occurring at any time of the year, usually during the passage of a cold front or during a thunderstorm. Small hailstones have a soft center and a single outer coat of ice.
..... Click the link for more information. . The typical thunderstorm caused by convection occurs when the sun's warmth has heated a large body of moist air near the ground. This air rises and is cooled by expansion. The cooling condenses the water vapor present in the air, forming a cumulus cloudcloud,
aggregation of minute particles of water or ice suspended in the air. Formation of Clouds

Clouds are formed when air containing water vapor is cooled below a critical temperature called the dew point and the resulting moisture condenses into droplets on
..... Click the link for more information. . If the process continues, the summit often attains a height of 4 mi (6.5 km) above the base, and the top spreads out in the shape of an anvil. The turbulent air currents within the cloud cause a continual breaking up and reuniting of the raindrops, which may form hail, and builds up strong electrical charges that result in lightning. As the storm approaches an area, the gentle flow of warm air feeding the cloud gives way to a strong, chilly gust of wind from the opposite direction, blowing from the base of the cloud. Intense rain begins, then gradually diminishes as the storm passes. Night thunderstorms are caused by the cooling of the upper layers of air by radiation; others are caused by approaching cold air masses that advance as a wedge near the ground, forcing the warmer air in its path to rise. Even a forest fire or a volcanic eruption may create a thunderstorm. Thunderstorms occur most frequently in the equatorial zone (some localities have as many as 200 a year) and seldom in the polar regions. In the United States they are most frequent along the E Gulf Coast (averaging more than 70 a year) and least frequent on the Pacific coast (less than 4 a year).
The Columbia Electronic Encyclopedia™ Copyright © 2013, Columbia University Press. Licensed from Columbia University Press. All rights reserved. www.cc.columbia.edu/cu/cup/
The following article is from The Great Soviet Encyclopedia (1979). It might be outdated or ideologically biased.

an atmospheric phenomenon, during which powerful electrical discharges—lightning accompanied by thunder—arise in large cumulonimbus clouds and between the clouds and the earth. As a rule, intensive downpours and often hail occur during thunderstorms and the wind increases, often to squall intensity.

Thunderstorms are classified as air-mass and frontal storms, depending on the conditions under which they develop. Air-mass storms over a continent arise as a result of local heating of the air from the earth’s surface, which leads to the development of ascending currents of local convection and the formation of powerful cumulonimbus clouds. For this reason, air-mass thunderstorms over land develop mostly after midday. Over the ocean, thunderstorms arise as a result of the development of convection in cold air masses, which move toward low latitudes over the warm water surface, so that in this case a certain maximum over a 24-hour period occurs during the night hours.

Thunderstorms arise in powerful cumulus clouds with peaks in the region where temperatures are below -15° to -20° C—that is, at altitudes on the order of 7 to 15 km. These clouds consist of a mixture of drops (supercooled in high strata) and crystals. Strong ascending and descending streams at speeds reaching dozens of meters per second penetrate the storm cloud, which is several hundred or even thousands of cubic meters in volume. The weight of water and ice particles in this volume totals 106 to 107 tons. The potential energy stored up in a storm cloud is in excess of 1013to 1014 joules—that is, an amount equal to the energy of a thermonuclear megaton bomb. The electrical charges of a storm cloud that produce lightning are equal to 10–100 coulombs and are spaced over distances of from 1 to 2 up to 10 km; the electrical currents that create these charges reach 10–100 amperes. The electrical field intensity within a storm cloud is equal to (1–3)·105 volts per m, and the effective electrical conductivity in the cloud is almost 100 times greater than in the surrounding atmosphere. The frequency of lightning in thunderstorms varies from several occurrences a second to one in several minutes. Under these conditions. 0.1–0.01 of the current flowing in storm clouds is expended on the current of lightning flashes.

The electrical characteristics of thunderstorms are due to the interaction of two groups of processes, which help to bring about the accumulation of electrical charges and to prevent them. Among the first are processes leading to the enlargement of particles in the storm cloud and the growth of electrical charges on them: increased supply of water vapor, increased speed of vertical air currents and increased capacity of clouds, and the presence of liquid and solid particles in the clouds. Among the second group is the electrical conductivity of the cloud. The relationship of the intensities of both groups of processes explains both the characteristic features of thunderstorms (seasonal rhythm, geographical distribution, structure, etc.) and their anomalies (the occurrence of thunderstorms in warm clouds, the development of unusually intensive thunderstorms, etc.).

[′thən·dər‚stȯrm]
(meteorology)
A convective storm accompanied by lightning and thunder and rain, rarely snow showers but often hail, and gusty squall winds at the onset of precipitation; the characteristic cloud is the cumulonimbus.
McGraw-Hill Dictionary of Scientific & Technical Terms, 6E, Copyright © 2003 by The McGraw-Hill Companies, Inc. 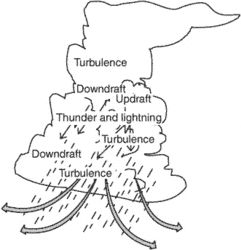 A term used for well-developed cumulonimbus (Cb) clouds that produce strong vertical drafts, rain, lightening, or hail, depending on the stage of life of the thunderstorm. Thunderstorms are said to be severe when they have one or more of the following features: winds over 50 knots (58 miles per hour), 3/4-in or larger hail, funnel clouds, or tornadoes.
An Illustrated Dictionary of Aviation Copyright © 2005 by The McGraw-Hill Companies, Inc. All rights reserved