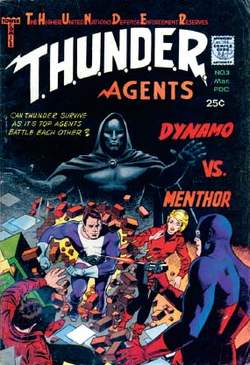 Of the many second-division publishers that sprang up in the 1960s, inspired by the sudden success of Marvel Comics, Tower (with its principal title T.H.U.N.D.E.R. Agents) is among the most fondly remembered. The precise origins of Tower Comics are still somewhat vague, but the company seems to have sprung from the Mid-wood and Belmont line of paperbacks, owned by Harry Shorten and Archie Comics co-owner Louis Silberkleit. Teaming up as Midwood-Tower, they created Tower Comics and recruited the great artist Wally Wood, fresh from a popular stint on Marvel’s Daredevil, to put together a comics line for them. Thrilled at the prospect of control over his own work, Wood gathered together his friends and studio members, and created the T.H.U.N.D.E.R. Agents.

The first issue of T.H.U.N.D.E.R. Agents came out in late 1965 and, unusually, had twice the page count of other comics at that time, sixty-eight pages, but at twenty-five cents it was also twice the price as well. The comic starred the supersecret heroes Dynamo, NoMan, Menthor, Raven, and Lightning. All of them worked for the clandestine T.H.U.N.D.E.R. organization—The Higher United Nations Defense Enforcement Reserves—in a battle against any evil foe who might threaten the earth.

The characters’ origin story reveals how T.H.U.N.D.E.R. operatives arrive too late to save the brilliant Professor Jennings from agents of the dreaded Warlord, but find three fantastic new inventions in his apartment. One of these is given to each of three brave T.H.U.N.D.E.R. Agents. Len Brown (a.k.a. Dynamo) is given an “electron molecular magnifier belt,” which gives him Superman-like strength and a body as hard as steel. Dr. Dunn, an aged colleague of Jennings who devised a way of transferring his mind into the body of an android (one of many which he had built), is given a cloak of invisibility to become NoMan. John Janus (a.k.a. Menthor) is given a cybernetic helmet that amplifies his brain power to such an extent that he can read minds and master telekinesis. (This character was originally a double agent, working for the Warlord, but he soon saw the error of his ways.) The T.H.U.N.D.E.R. Squad (Guy Gilbert, Weed, Kitten, and Dynamite) were regular agents who popped up in various stories to help their superpowered colleagues defeat a variety of aliens, zombies, and dictators.

In what was clearly a combination of Marvel-style superheroics and Man from Uncle/James Bond-style spy thrillers, the T.H.U.N.D.E.R. Agents regularly came up against sinister secret societies, such as the Warlords, Overlord and his Subterraneans, the Red Star Group, and SPIDER. Other dastardly (though perhaps rather routine) villains included Dynavac, Vibraman, the Tarantula, Dr. Sparta, and Demo and the Submen. Two of the publisher’s most memorable villains had an unusual depth to them—Iron Maiden and Andor. The armor-clad, beautiful, yet deadly, Iron Maiden was Dynamo’s top enemy but was also in love with him and would go to some lengths not to kill him. Andor had been experimented on by the Subterraneans since childhood, to make him a deadly opponent for the T.H.U.N.D.E.R. Agents, but he was a tormented soul who soon turned against his masters.

Each issue of T.H.U.N.D.E.R. Agents was a treat for the eyes. Wood was at the peak of his powers on the series and was prominently featured in each issue, while such artistic talents as Reed Crandall, Gil Kane, Mike Sekowsky, and Steve Ditko also contributed notable work. Scripts were provided by Wood himself, Steve Skeates, Bill Pearson, Larry Ivie, and Len Brown. The latter’s name had been appropriated (much to the writer’s surprise) by Wood as Dynamo’s alter ego.

Tower’s ambition to compete with Marvel and DC was great, but it was also the company’s undoing. In 1966, it released a second superhero title, Undersea Agent, and later spun-off Dynamo and NoMan into their own short-lived series. In addition, it launched a war comic—Fight the Enemy— and a couple of titles starring Tippy Teen (in an attempt to tap into the Archie Comics market). All of the comics were double-sized and cost twenty-five cents each, and ultimately they overstretched the publisher’s talents and readership. At double the price of other comics on the stands, readers were put off. In any case, as beautiful as the comics were, they lacked Marvel’s personality and excitement. Tower had its innovative ideas (killing off Menthor in issue #7, for instance) but the company was occasionally too eager to copy more successful superheroes. For example, T.H.U.N.D.E.R. Agents Lightning and the Raven were transparently based on the Flash and Hawk-man. So most of these new titles were dead by 1967, while T.H.U.N.D.E.R. Agents staggered on, with an increasingly erratic schedule, until issue #20 in 1969. Tippy Teen, on the other hand, proved to be the publisher’s most successful comic, running for twenty-seven issues until 1970.

Despite its relatively short life span, there have been numerous official and unofficial T.H.U.N.D.E.R. Agents revivals. Throughout the 1980s, rival comic book companies published competing T.H.U.N.D.E.R. Agents comics, with certain publishers believing that they had bought the rights to the heroes, while others claimed they were in the public domain. According to the July 2001 issue of Comic Book Artist magazine, eight different titles (from five companies) either presented new strips or reprinted original T.H.U.N.D.E.R. Agents comics, before the copyright situation was remedied. Interestingly, in the United Kingdom much of the Tower line was reprinted in black-and-white titles, such as Creepy Worlds and Uncanny Tales by the Alan Class Company, and was continuously reprinted from the 1960s up to the mid-1980s, making these titles as familiar to British readers as many Marvel or DC comics. The 1990s even saw a bootleg British T.H.U.N.D.E.R. Agents comic clearly photocopied from American issues.

By the mid-1990s, the legal complexities had been ironed out and a regular T.H.U.N.D.E.R. Agents series was announced by—of all companies—Penthouse magazine. However, while many issues had been completed, only one story appeared, in the pages of Omni Comix #3, before Penthouse canceled its nascent comic line. Fans could have been forgiven for thinking that the characters were forever doomed, but in 2009, DC Comics announced that it would integrate the T.H.U.N.D.E.R. Agents into the DC universe, and the company finally launched a new T.H.U.N.D.E.R. Agents comics series in 2011. —DAR