device for recording and replaying of sound, video, and digital information on plastic (usually polyester) or paper tape. The tape is coated with fine particles of a magnetic substance, usually an oxide of iron, cobalt, or chromium. The coating is normally held on the tape with a special binder. Tape recorders can store many different forms of information. The first tape recorders were used to store audio information. In audio recorders, the sound to be recorded is picked up by a device such as a microphonemicrophone,
device for converting sound into electrical energy, used in radio broadcasting, recording, and sound amplifying systems. Its basic component is a diaphragm that responds to the pressure or particle velocity of sound waves.
..... Click the link for more information. , and transformed into an electric current. The current is fed to a transducertransducer,
device that accepts an input of energy in one form and produces an output of energy in some other form, with a known, fixed relationship between the input and output. One widely used class of transducers consists of devices that produce an electric output signal, e.g.
..... Click the link for more information.  in the recording head of the tape recorder, which converts it into corresponding magnetic flux variations that magnetize the particles on the tape. Tape recorders always require that the recording media and the recording or playback tape heads move with respect to each other. During playback the tape passes over the playback head (often the same one used for recording) and the tape's magnetic field induces a current in the transducer. The current is then amplified and used to reproduce sound through a loudspeakerloudspeaker
or speaker,
device used to convert electrical energy into sound. It consists essentially of a thin flexible sheet called a diaphragm that is made to vibrate by an electric signal from an amplifier.
..... Click the link for more information. . "Tape hiss," sound composed of high frequencies picked up at random during recording, is suppressed by several systems, among them Dolby, Dolby-B, Dolby-C, and dbx. Digital audio tape (DAT) and digital compact cassette (DCC) recorders transform the audio signals into digital pulses, which are then stored on the tape. Both eliminate tape hiss and reproduce sound more accurately than analog recorders. Digital tape recording devices are also used to store programs and data for a computer. Magnetic tape can also be used to store video information. Videocassette recordersvideocassette recorder
(VCR), device that can record television programs or the images from a video camera on magnetic tape (see tape recorder); it can also play prerecorded tapes.
..... Click the link for more information.  use a rotating-head system to increase tape capacity. The recording heads move in a direction almost perpendicular to the tape movement, resulting in diagonal bands of information across the tape width. Over the years a wide variety of tape formats, for both reel-to-reel and cassette recorders have been developed. In most cases tape recording has been superseded by digital recording to solid-state storage or magnetic hard drives. See sound recordingsound recording,
process of converting the acoustic energy of sound into some form in which it can be permanently stored and reproduced at any time.

In 1855 the inventor Leon Scott constructed a device called a phonautograph that recorded tracings of the vibrations of
..... Click the link for more information. ; televisiontelevision,
transmission and reception of still or moving images by means of electrical signals, originally primarily by means of electromagnetic radiation using the techniques of radio, now also by fiber-optic and coaxial cables and other means.
..... Click the link for more information. .
The Columbia Electronic Encyclopedia™ Copyright © 2013, Columbia University Press. Licensed from Columbia University Press. All rights reserved. www.cc.columbia.edu/cu/cup/

Atape recorder can be a useful tool for receiving communications from the deceased. In You Can Communicate With the Unseen World (1974), Harold Sherman wrote, “By use of an ordinary tape recorder and/or a radio set attuned to unused frequencies, spirit voices of purported entities are being received.” This is known as Electronic Voice Phenomenon (EVP).

When setting out to record such spirit messages, many people start with either a short prayer or a brief period of meditation. The technique is to then set the tape recorder to “Record,” to state the date and time, and then to leave it running. The recording is best done in an area where no sound would normally be picked up. Any spirit voices may be heard upon playing back the tape. The volume should be turned all the way up and the resulting background “noise” (e.g. possibly a hissing sound) listened to carefully. With a multi-speed tape recorder, it is recommended that the tape be played back at a different speed from that used for recording. Although spirit voices will speak at any time of the day or night, it is best—initially at least—to conduct experiments at the same time every day.

Some researchers will ask questions at intervals during the recording of the tape. This gives spirit a chance to address those questions. If this is done then it is suggested that the last question be an invitation for spirit to say something of his or her own choosing.

In There Is No Death (2003), Tom and Lisa Butler said, “There are no rigid rules for experimenting with EVP … EVP has been recorded on just about everything that will record voice frequencies.” Reel-to-reel recorders were used at first, and later cassette recorders were used. Today there are personal note recorders, or digital note-takers, which are known as IC recorders. According to the Butlers, these perform even better than the cassette recorders, and produce results on par with reel-to-reel.

Butler, Tom and Lisa: There Is No Death and There Are No Dead. Reno: AA-EVP, 2003
Sherman, Harold: You Can Communicate with the Unseen World. New York: Fawcett, 1974
The Spirit Book © 2006 Visible Ink Press®. All rights reserved.
The following article is from The Great Soviet Encyclopedia (1979). It might be outdated or ideologically biased.

a device for the magnetic recording and reproduction of sound.

Depending on their quality and intended use, tape recorders are classified as professional, studio, semiprofessional, or home models. Professional tape recorders are designed for the synchronous recording of sound (with a visual image) on perforated magnetic tape and are used in sound films. Studio recorders for recording on unperforated 6.25-mm magnetic tape are used in radio broadcasting, motion-picture studios, recording studios, television centers, and wherever high-quality sound recording is required. Semiprofessional recorders, most of which require 6.25-mm tape, are used for recording dispatcher communications in transport and for audio-frequency signals in scientific studies. For amateur recording and the playback of commercial tapes, home models are adequate. In addition, there are dictating machines; reporters’ models, light portable machines with independent power supplies; and students’ models, which are designed for parallel dual-track recording and which may be plugged into external monitors in foreign-language labs. Tape decks, as well as combinations of tape recorders and other types of equipment, such as radios and turntables, are available.

A tape recorder consists of a tape drive mechanism to advance the tape; electric signal amplifiers; magnetic heads for recording, playing back, and erasing the recordings; a high-frequency oscillations generator; a recording level indicator; and a power supply. The high-frequency (40-200 kilohertz) current from the generator is fed into the coils of the recording head (for magnetizing the tape) and erasing head. The basic quality of the recorder depends on the degree of magnetization. The optimal strength of the magnetization current is chosen for each type of magnetic tape. To simplify and reduce the cost of tape recorders (particularly, those for consumer use), a universal amplifier head is used (for sequential recording and playback) in conjunction with a universal magnetic head (see Figure 1).

The magnetic tape is usually wound on a spool (in professional recorders) or reel (in semiprofessional and home recorders). In the new cassette recorders the tape (occasionally, the magnetic wire) is contained in a closed cassette that is easily inserted and removed. Cassettes protect the tape from dust and manual contact and simplify the operation of the recorder. 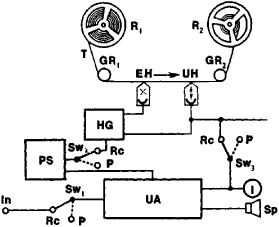 [′tāp ri‚kȯrd·ər]
(engineering acoustics)
A device that records audio signals and other information on magnetic tape by selective magnetization of iron oxide particles that form a thin film on the tape; a recorder usually also includes provisions for playing back the recorded material.
McGraw-Hill Dictionary of Scientific & Technical Terms, 6E, Copyright © 2003 by The McGraw-Hill Companies, Inc.

an electrical device used for recording sounds on magnetic tape and usually also for reproducing them, consisting of a tape deck and one or more amplifiers and loudspeakers
Collins Discovery Encyclopedia, 1st edition © HarperCollins Publishers 2005

Feedback
Flashcards & Bookmarks ?
Please log in or register to use Flashcards and Bookmarks. You can also log in with
Flashcards ?
My bookmarks ?
+ Add current page to bookmarks
Mentioned in ?
References in periodicals archive ?
I urgently needed that tape recorder for an interview.
Sometimes it is better to keep up with technology
All I'm saying is that I don't take notes or use a tape recorder because it induces a self-consciousness on their part if you tell people you're going to do something.
Interview
"We find that the older systems that rely too heavily on video tape recorders leave too much room for human and equipment error," says Simon.
Security reaches the TiVo era in NYC apartment buildings
But the tape recorders were removed when new, more powerful PCs, coupled with our second-generation newsroom software, enabled us to edit and play sound from our computers.
A decade of digitizing: during the past 10 years in radio and television, tape and bulky equipment have gone the way of the dinosaur. Here is a quick look at some of the most important technological advances electronic media
"If I'm by myself and I have a tape recorder I make drum sounds.
Tom Waits
Q: What was going through your head when the marshal demanded that you turn over your tape recorder? Was there any inner struggle, hesitation or uncertainty?
Q & A
The 50 journalists were told that they could not approach Kidman, nor even touch their tape recorders. They were also forbidden from leaving their seats until she was safely out of the room.
Hollywood news: Who are you Kidding?
For years, the radio astronomers have exclusively used instrumentation tape recorders manufactured by AMPEX, Metrum-Datatape, Sony, and others.
Disk vs. tape: disk will win over time. (Technology Arena Disk vs. Tape)
The Star (Strategic/Tactical Airborne Recorder) family of solid state recorders from L3 Communications is an open architecture-based replacement for magnetic tape recorders in high capacity, high data rate reconnaissance, instrumentation and flight test applications.
The star is watching. (Digest)
They are being issued with mini tape recorders to help catch the crackpots who drive under their lollipops without stopping at crossing control points, usually outside schools.
Motoring: LOLLIPOP REVENGE
Both are doctors' sons, and as part of their quest for good vibrations, they set up digital audio tape recorders in clinics and operating rooms where they sampled the sounds of surgery--after taking the necessary precautions regarding patient confidentiality issues, of course.
Sounds of Surgery. (Indications)
The idea was to give tape recorders and microphones to a group of teens around the country and help them report about their own lives.
Radio diarists document their lives: these `reporters' capture moments journalists never could. (Radio and the Internet)