[¦thī·ō·yu̇′rē·ə]
(organic chemistry)
(NH2)2CS Bitter-tasting, white crystals with a melting point of 180-182°C; soluble in cold water and alcohol; used in photography and photocopying, as a rubber accelerator, and as an antithyroid drug in treating hyperthyroidism. Also known as thiocarbamide.
McGraw-Hill Dictionary of Scientific & Technical Terms, 6E, Copyright © 2003 by The McGraw-Hill Companies, Inc.
The following article is from The Great Soviet Encyclopedia (1979). It might be outdated or ideologically biased.

Thiourea is obtained by isomerization of ammonium thiocyanate (a) and by the addition of hydrogen sulfide to cyanamide (b):

Hydrolysis of thiourea yields ammonia, hydrogen sulfide, and carbon dioxide. Alkylation of thiourea produces the S-alkyl derivatives of isothiourea, S-alkylisothiouric salts (I), which decompose under the action of alkalies to form mercaptans (II): 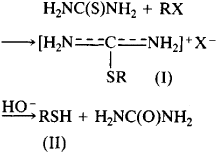 where X is a halogen and R is an alkyl.

Thiourea is used in the synthesis of various organic compounds, including pharmaceuticals, and as a growth substance. Thiourea yields inclusion compounds with branched and cyclic alkanes, but not with hydrocarbons of normal structure. This property is used for the separation of these two groups of compounds.