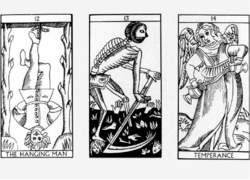 Tarot cards based on the Marseilles deck: the Hanging Man, the unnamed Death Card, and Temperance. Courtesy Fortean Picture Library.

Although tarot cards are not a tool used by mediums, they can be useful in developing psychic abilities. Mediumship deals with communication between this world and the spirit world of the deceased. Psychism is basically of this physical plane, without contacting spirits.

The four suits of the Minor Arcana are most commonly known as Cups, Pentacles, Wands, and Swords (which became Hearts, Diamonds, Clubs and Spades, in the regular deck). However, on different decks they are variously known by other names such as cups, chalices, cauldrons, vessels, hearts; pentacles, coins, disks, wheels, deniers, stars, bells; wands, staves, batons, rods, scepters, leaves; swords, knives, blades, spears, acorns. Some decks are specialized in their art focus, thus producing yet other names for the suits. For divinatory reading of the tarot cards, the two Arcanas are usually intermixed; shuffled together and laid out in various spreads for interpretation.

The most common names for the twenty-two cards of the Major Arcana are: Fool, Magician, High Priestess, Empress, Emperor, Hierophant, Lovers, Chariot, Strength, Hermit, Wheel of Fortune, Justice, Hanged Man, Death, Temperance, Devil, Lightning-Struck Tower, Star, Moon, Sun, Judgement, World. The order of these can vary slightly (in some decks Strength and Justice are reversed). The Fool may be placed at either the beginning or the end, and consequently is unnumbered. (The Fool became the Joker of the regular playing card deck.) These cards depict symbolic figures, elements of nature, human experiences on the spiritual journey, and hopes, fears, joys, and sorrows. They are drawn from legend and myth, from universal symbolism, philosophies, religions, and magical beliefs. Some say they depict the grades or stages of the journey of an initiate. Some authors equate the Major Arcana with the twenty-two letters of the Hebrew alphabet and work them with the Qabbalah and the Tree of Life. The French occultist known as Eliphas Zahed Lévi (1810–1875), whose real name was Alphonse Louis Constant, was the first to do this.

In A Complete Guide to the Tarot, Eden Gray wrote, “Symbolic keys, like material ones, are expected to fit locks and open doors. Systems such as the Kabalah or the Tarot, however, do not accomplish this in a simple or direct manner. Here we find keys that fit more than one lock and locks that can receive more than one key. The correspondence between the twenty-two Major Arcana Keys and the twenty-two paths on the Tree of Life and the twenty-two letters of the Hebrew alphabet, as well as astrological signs, evokes complex and subtle associations that can never be rigidly confined.”

The first tarot cards were individually painted on thin sheets of ivory, parchment, silver and gold. Later they were produced on card stock, though still individually painted. There was a set of tarot cards painted especially for Charles VI of France, in 1392 (seventeen of these cards survive today in the Bibliothèque Nationale in Paris). With the coming of block printing in Nuremberg, c. 1430, they became more generally available and eventually quite popular. In fifteenth century England, King Edward IV forbade the importation of tarot cards, but soldiers fighting in Normandy, Touraine, Anjou, and Poitou smuggled cards from France, and the decks found their way into the homes of the nobility. By the time of the French Revolution, there was a grand revival of interest in esotericism, and with mystic lodges and secret societies springing up, the tarot came into fashion and more general use.

The actual origins of the tarot are lost in time. There is some evidence to show that the cards originated in the north of India and were brought out of that region by the Roma, or Gypsies, in their mass exodus. Certainly the Gypsies were responsible for much of the distribution across Europe. But there is also speculation that the cards originated in China, Korea, or Northern Italy.

The cards may be used as individual meditation tools. Some people draw a single card at the start of every day and meditate on it; obtaining an idea of what the coming day will hold. But the most common practice is to use the cards to answer questions, or to glean an idea of what the future might hold for oneself or for another. There is a traditional way of doing this, with a variety of spreads or layouts for the cards, with each position of a card having a specific meaning.

Feedback
Flashcards & Bookmarks ?
Please log in or register to use Flashcards and Bookmarks. You can also log in with
Flashcards ?
My bookmarks ?
+ Add current page to bookmarks
Mentioned in ?
References in periodicals archive ?
Devika D/O Deepak Gupta is a ThetaHealing Practitioner, Tarot Card Reader & Instructor, and Reiki practitioner who has devoted herself towards the betterment of people's life.
Learn Basic Course of Intuitive Tarot by Devika, Instructor with Awakening Love Academy
"I wouldn't say I'm an expert on tarot cards, but it's been really interesting to learn about.
bright future for courtney
There are many Tarot card readers in Metro Manila, but few are good ones.
Is it morally wrong to consult a fortuneteller?
French occultist Jean-Baptiste Alliette is believed to have been the first to publicise this use of tarot cards around 1785.
DEVIL CARD CONFESSION; THE KILLER CAUGHT BY A TAROT READER; I turned over the Blasted Tower, the Emperor & then the Devil.. & he said 'It's terrible, I killed him'; EXCLUSIVE
WOMEN IN BUSINESS Name: Nicola Phillips Business: Tarot card readings Links: www.facebook.com/tarotreadingsnewcastle To sum up your business: I offer private tarot card readings, both face to face in my home and over the telephone.
Giving your love this Christmas
With a spiritualist church, dream workshops, astrology and tarot card readings, the County Durham town is becoming a magnet for mysticism.
The mystical town of ... Stanley? New age replacing industrial tradition
Will Sue, no stranger to the Tarot cards, be able to predict whether her moussaka parcels will have what it takes, or that the final night's dining will end with everyone in a hot tub?
BEST REALITY; TV CHOICE
to weirdo disco ornamented by cowbell and jaunty guitars, for a split second it seems like a good idea to quit your day job to sell oil paintings in Union Square and read tarot cards for side cash.
YACHT See Mystery Lights
As well as containing all you'd expect from a social networking site, Psychic-Knight provides discussion for people with an interest in everything from crystals to tarot cards.
web: KEEP IN TOUCH WITH SPIRITS
The 41-year-old mum of one had her Tarot cards read by the Psychic Sisters at Chinawhite night club in London's West End.
ViP: Kate's playing TV cards close
Upstairs in the Crosley Mansion, palms and tarot cards were read, while a bayside tent hosted cigar smokers and brandy drinkers.
Casablanca at the Crosley
A YOU can learn how to perform readings, find out about tarot cards and even go on a ghost-hunt on a three-night weekend break with Warner Leisure Hotels.
TAKE B&B BREAK TO THE STARS