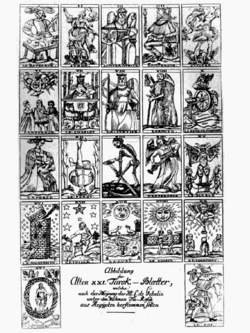 A German engraving of tarot cards based on the Count de Gebelin pack. Reproduced by permission of Fortean Picture Library.

The tarot is a set of cards related to contemporary playing cards that are used for divination. Tarot cards are often viewed as being an extension of Kaballah (or Cabbala or Cabala), a form of Jewish occultism. Kaballistic mysticism is built around the Tree of Life, a widespread diagram of the cosmos consisting of 10 circles (spheres) that are connected by 22 paths (lines). Each of the principal 22 tarot cards (the Major Arcana) is associated with one of these lines.

One characteristic practice in traditional occult thought has been to connect the symbol system of a given occult art with other symbol systems. Because of the prestige enjoyed by astrology in past eras, practitioners of other occult systems were especially interested in drawing on astrological symbolism. Palmistry, for example, deploys the symbolism of astrology, particularly in the names given to the fingers and to certain mounds on the palms.

Over the centuries, astrology and astrological symbolism became associated with both the tarot and the Kaballah. However, as systems that grew to maturity independently of the science of the stars, this connection was never quite natural. The difficulty is easy enough to see from a purely mathematical standpoint: How does one appropriately associate 10 spheres or 22 cards with 7 planets (the number of significant heavenly bodies known to the ancients) or 12 signs? Such associations, while useful in some instances, are never really convincing as a complete system.