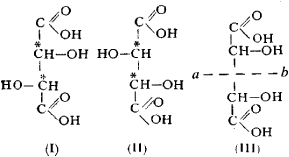 racemic mixture of D- and L-tartaric acids); and mesotartaric acid (III), which is optically inactive because of intramolecular compensation of the rotation of the plane of polarization owing to the presence of an additional axis of symmetry (ab).

D-tartaric acid and its salts (tartrates) are used extensively in the food industry (for example, in the preparation of soft drinks and in baking), in medicine (tartar emetic), in dyeing, in organic synthesis, and in analytical chemistry. In an alkaline medium, D-tartaric acid dissolves Cu(OH)2, yielding a transparent bright blue solution—Fehling solution—that is used as a reagent in testing the reducing capacity of substances.