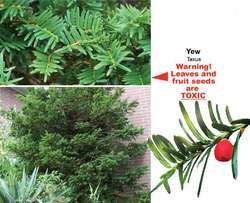 Looks like a pine tree, but is NOT a pine tree. The "needles"/leaves are toxic, but the berries are edible (not the seed of the berry). It is distinguishable by its SOFT, FLAT opposing needles (pine needles are hard, not soft). This tree is strong medicine. The drug Tomoxifin, used in the treatment of breast cancer is made from this tree. If you prune the tree, it will produce fruit later in the summer, - a tiny red berry with a hollow hole in the bottom containing the seed. You can eat the red flesh but spit out the seed which is toxic. You can tell it's ready to eat when the birds are eating the fruit. The fruit tastes amazing, like a sweet dessert that melts in your mouth.
Edible Plant Guide © 2012 Markus Rothkranz
The following article is from The Great Soviet Encyclopedia (1979). It might be outdated or ideologically biased.

(yew), a genus of coniferous, evergreen, dioecious (rarely monoecious) trees and shrubs of the family Taxaceae. The leaves are alternate but, because of the deflection of the petioles, grow in a two-tanked position on the lateral horizontal shoots. They are dark green and shiny and have a protruding midrib. The male spikelets are solitary and spherical. The pollen has no air sacs. The berry-like fruits are solitary and contain one seed surrounded by a fleshy red aril.

There are approximately ten species of Taxus, which are distributed in Europe, Asia Minor, East Asia, the Caucasus, and North America. Two species grow in the USSR: the English yew (T. baccata) and the Japanese yew (T. cuspidata). The English yew grows in the Belovezh Virgin Forest (western Byelorussia), Bucovina (western Ukraine), the southern Crimea, and the Caucasus. It attains a height of 27 m and a diameter of 1.5 m. It is shade-tolerant and lives as long as 2,000–3,000 years. Its hard, durable, reddish brown wood is highly valued for use in furniture-making and cabinetry. The entire plant is poisonous, espedaily to horses, because of the presence of the alkaloid taxine. Shrub forms have been grown since antiquity as ornamental hedges and borders and for topiary work.

The Japanese yew grows in the Soviet Far East, China (Manchuria), Korea, and Japan. The tree, which reaches 20 m in height, yields a valuable rose-red wood. The Canada yew (T. canadensis) is a shrublike tree growing 1–2 m tall that has yellowish leaves. It is sometimes grown in the USSR.

Feedback
Flashcards & Bookmarks ?
Please log in or register to use Flashcards and Bookmarks. You can also log in with
Flashcards ?
My bookmarks ?
+ Add current page to bookmarks
Mentioned in ?
References in periodicals archive ?
There were similar, but smaller, differences in restenosis rates among nondiabetic patients; restenosis was 20% more likely with the Endeavor stent and 30% more likely with the Taxus stents compared with the Cypher stent.
Restenosis after drug-eluting stents is higher in diabetics
The data was collected from patients treated with the "slow-release" version of Taxus available commercially in the U.S.
Panel deems drug-eluting stents safe for on-label use, but wants more data
By that point, the team had met its goal of shipping more TAXUS stents much faster.
Boston Scientific: rethinks the box
The technique enables Gibson to screen multiple cell lines of all five known Taxus species for their ability to produce paclitaxel in vitro.
New Technique Could Boost Taxol Production
Most taxa in the Taxaceae are rare or restricted in their distribution, although several species of Taxus are natively abundant and widely cultivated.
Taxaceae: the genera and cultivates species
Western yew -- Taxus brevifolia -- is also called Pacific yew and mountain mahogany.
Yew: the strong, pliable softwood
The recent discovery of ways to extract taxol from European yew needles (Taxus baccata), a yew fungus (Taxomyces andreanae), and Taxus bushes have eased supply pressures.
A photo finish for total taxol synthesis
M2 EQUITYBITES-March 19, 2014-Cardium Therapeutics changes corporate name and business to Taxus Cardium Pharmaceuticals Group
Cardium Therapeutics changes corporate name and business to Taxus Cardium Pharmaceuticals Group
(CRXM) said it will collaborate with Shanxi Taxus Pharmaceuticals Co., Ltd., to support the worldwide clinical and commercial development of Cardium's advanced regenerative medicine therapeutics products, including Generx product candidate and Excellagen, FDA-cleared advanced wound care product.
Cardium to work with partner to commercialize therapeutics
Taxus is affdiated with Shenzhen Forntsea Taxus Industry Capital Management.
Cardium to work with partner to commercialize therapeutics
Despite these losses, American badger (Taxidea taxus) range expansions likely have been suggested in Indiana (Lyon, 1932; Berkley and Johnson, 1998), Ohio (Moseley, 1934; Leedy, 1947; Nugent and Choate, 1970), and Illinois (Gremillion-Smith 1985; Ver Steeg and Warner, 2000) and primarily attributed to deforestation for agriculture.
Badger (Taxidea taxus) resource selection and spatial ecology in intensive agricultural landscapes