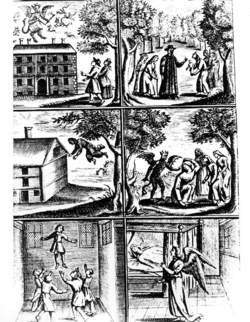 Frontispiece of Saducismus Triumphaus, 1681, showing the major cases of witchcraft discussed by Joseph Glanville in his book. The Tedworth Drummer appears in the upper left. Courtesy Fortean Picture Library.

The case of the Tedworth Drummer is an early example of poltergeist phenomena. It was first recorded by Joseph Glanville in his Sadducismus Triumphatus (1668). The occurrence was at the home of a magistrate, John Mompesson, in Tedworth, England, in April, 1661.

It all began with a simple case of vagrancy. William Drury was an itinerant magician as well as a drummer who was caught in some suspect dealings. Officials confiscated his belongings, which included his drum. Drury was found guilty and forced to leave the area. His drum was not returned to him but was kept at the magistrate's house.

The magistrate later had to leave home for a few days. He returned to hysterical reports of strange noises that had been plaguing his house ever since he had left. The noises sounded like the tapping and banging of a drum, and came from within the walls and on the roof. Roundheads, cuckolds, and tattoos played at all hours of the day and night, very obviously beaten out on a drum. Magistrate Mompesson had Drury's drum brought out and personally destroyed it. He assumed that would take care of things. It did not; the sounds continued.

The Reverend Joseph Glanville, chaplain to King Charles II, was invited to investigate. According to the account given in his book, Glanville went upstairs and found two young girls, aged seven and eleven, sitting on their bed, very frightened. Scratching noises came from the bolster at the head of the bed and from the wall panels. Glanville could see the girls' hands in full view so he knew they were not the cause of the noises. He searched carefully and thoroughly but could find no explanation for the sounds.

Glanville noticed a second bed with a linen bag hanging from one of its bedposts, swinging and moving as though it contained something alive. He grabbed the bag and up-ended it, but found nothing inside.

After many days the sounds began to die down. Mompesson learned that Drury had been found guilty of theft in the city of Gloucester and deported to the colonies. Drury's departure seemed to quiet the noises. Some months later, however, the noises started up again, and it was learned that Drury had returned to England. The sound of the drum became more intense than ever and was accompanied by other poltergeist phenomena. Shoes flew across rooms, chamberpots emptied onto beds, and terrible sulfurous smells filled many parts of the house.

The drumming sounds were so loud that others in the village could hear them clearly. No explanation could be found, and the noises continued for almost a year until they suddenly stopped. Mompesson tried to locate William Drury, but he seemed to have disappeared. He was never heard from again, and the sound of his drum was heard no more.