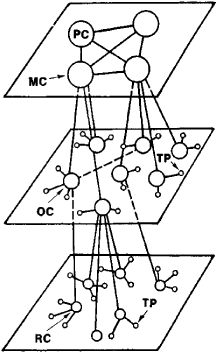 Figure 1. Schematic diagram of the USSR telegraph network: (MC) major center, located at the center of a telegraph zone, where traffic intersects, (PC) primary center — one of the major centers, from which the entire network is controlled, (OC) oblast center, located in the administrative centers of all republics and oblasts, (RC) raion center, located in the administrative centers of all raions and in cities under oblast jurisdiction, (TP) terminal points. Solid lines indicate permanent connections. Broken lines indicate connections established only when traffic flow is high.

In the USSR the telegraph network includes the general public network, which takes in enterprises of the Ministry of Communications; the teletypewriter exchange service, the subscribers to which are state enterprises and institutions; a leased-link network; and the facsimile service network. Telegraph networks are designed for the transmission of telegrams from state enterprises, institutions, and private individuals, for the teletypewriter exchange, and for the transmission of statistical and other information and various types of digital data between enterprises. Telegraph channels and terminal equipment may be leased to organizations, enterprises, ministries, or departments.

A telegraph network is designed according to a composite principle, combining direct, tandem connections between higher centers and the branch connection of lower centers (Figure 1). This system ensures efficient use of channels, reliability and flexibility of communications, and the possibility of using bypass routes for connecting one center with another. The USSR is divided into 16 zones (1976), each with its own major center. Oblast and raion centers in a given zone are connected to other telegraph networks through the major center. 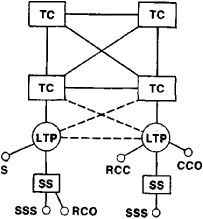 The existing telegraph network uses both fixed, or permanent, channels and switching channels. Permanent channels are primarily supplied to leaseholders and sometimes to communications agencies of the general public network; they are also used for the facsimile service. The teletypewriter exchange service and a large part of the general public network use switching channels, which ensure considerably greater possibilities for service automation, economy of network design, and a wide range of customer services. Channel switching is done at telegraph stations. Operational control of the trunk network, including the establishment of bypass routes and the redistribution of traffic flow, is carried out by dispatchers.

A new, reorganized telegraph network (Figure 2, page 467) has been proposed within the framework of the USSR’s integrated automatic communications system. It provides for tandem centers, which automatically redistribute the traffic load via bypass routes when a line is busy or out of order, thereby increasing the reliability and quality of network operation.

Feedback
Flashcards & Bookmarks ?
Please log in or register to use Flashcards and Bookmarks. You can also log in with
Flashcards ?
My bookmarks ?
+ Add current page to bookmarks
Mentioned in ?
References in periodicals archive ?
They included the government-sponsored construction, in 1899, of the first railway line and the Seoul streetcar system, as well as developmental projects in mining, commerce and trade, electricity generation, waterworks and communication infrastructure such as a telegraph network.
Looking back at Great Korean Empire
To do that, a line under the supervision of Henry O'Reilly was built in 1848 between Detroit and Buffalo, connecting Michigan to the existing telegraph network of the larger Atlantic, Lake & Mississippi Telegraph Company in the Eastern United States.
The first telegraphs in Michigan
They explore pneumatic tube systems in the 19th century, the relationship between communication infrastructures and nationalization and territorialization processes in the 19th century, the cultural and political dimensions of the Western North Carolina Railroad, the relationship between modern transportation infrastructures and urban development, the interaction between citizen and state during the establishment of modern telecommunications in Denmark, the strategic implications of the global telegraph network during World War I, the NATO infrastructure programs in the early 1950s, and the emergence of the material infrastructure used to receive satellite television signals in Poland during the 1980s and 1990s.
Historicizing Infrastructure
The arrival of the Internet and cable television in the last decades of the twentieth century brought another resolution in communications that parallels the alignment of international cables, the US domestic telegraph network, and the mass-circulation newspapers that created new channels for the expressions of patriotism and imperialism in the last decade of the nineteenth century.
Cables, Crises, and the Press: The Geopolitics of the New International Information System in the Americas, 1866-1903
In the case of Western Australia, which was linked belatedly to the eastern telegraph network in 1877, Todd went further still, laying the foundation for systematic meteorological observations there in 1896.
From data to news: weather reporting, telegraphy and the press in colonial Australia
In due course he came to be, as Caernarfon's mayor had it, the man in charge of the Empire's telegraph network, or, more prosaically, the Post Office's superintendent of telegraphs following the nationalisation of Britain's telegraph network in 1870.
Preece put the spark into the telegraphic culture
"Certainly by 1852, and probably earlier, Birmingham was part of the national electrical telegraph network, which only began in 1846 - that's as far back as BT goes."
How a city answered the call when the time came; Birmingham's BT Tower looms large over the city - but its roots run even deeper. Enda Mullen speaks to the telecom firm's head of archives, David Hay, about why it is so connected to the city
He examines the telegraph's impacts on the way war was fought during the American Civil War, the politics and economics of telegraph network ownership, impacts on written language and journalism, the role of the telegraph in the rise of modern finance capitalism, and the logic of industrial succession in the transition from the telegraph to the telephone.
The telegraph in America, 1832-1920
Ferguson said: "Norway had seen the vulnerability of the GPO telegraph network to destruction or sabotage by a German agent or sympathiser.
FIRING BLANKS; UPRISING: PO GUARDS HAD GUNS BUT NO AMMO Guards told 'shoot to kill' Bulletless workers fixed bayonets to fend off rebels
Messenger boys were crucial to the functioning of the telegraph network for nearly one hundred years, both in the network's core business of handling information, and in its accessory business of hiring out temporary workers.
Downey, Gregory J. Telegraph Messenger Boys: Labor, Technology, and Geography, 1850-1950
In truth, the advent of the Republic posed the ultimate threat to Bororo nomadic existence in the guise of enormous swathes cleared by Rondon and his soldiers through the hinterlands to expand the national telegraph network. Conceived at the highest levels of a government that showed little tolerance for Indians who blocked the way, the telegraph project opened up previously remote territory, exposing the Bororo to new incursions by settlers.
Myths of pacification: Brazilian frontier settlement and the subjugation of the Bororo Indians
In fact, information distillation began with the advent of the telephone and telegraph network. The telephone allowed people to pass information between two parties through audio means, irrespective of the information's original form.
Information in the Information Age