the network of structures and equipment used in telephone communication. A network comprises switching points, central offices, communications lines, and telephone sets. Telephone sets are equipped with rotary dials, key pulsers, or automatic dialers. The communication lines used in telephone networks take the form of aerial wires and cables, underground wires and cables, submarine cables, radio relay systems, optical (laser) systems, and satellite links. In order to use these lines most efficiently, multiplexing equipment (seeLINE MULTIPLEXING) is used to create a certain number of standard voice-frequency (300–3400 hertz) communications channels. The switching operations necessary in setting up telephone connections are carried out at central offices and at switching points.

Depending on their structure and function, telephone networks in the USSR, as in many other countries, are subdivided into local (rural and urban), area, interarea, long-distance, and international networks. With rural telephone networks, each local central office serves between 50 and 200 subscribers. The local offices are interconnected through a tandem office, and the tandem offices are linked through a central tandem office to a toll office (Figure 1). Urban networks having more than one central office are divided into districts. When the districts are fairly small, that is, serving only tens of thousands of subscribers, the district central offices are interconnected, and each one is linked to a toll office. In larger systems, where each district serves hundreds of thousands of subscribers, lines are used more efficiently and multiplexing is more effective when the district offices are linked to the toll office through a tandem office. 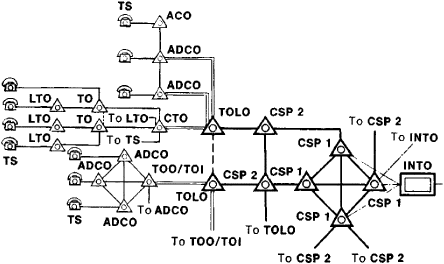 A long-distance telephone network is formed by a country’s toll offices, control switching points, and interconnecting communications lines. The control switching points are designed to make indirect connections and to map out alternate routes. In telephone networks where central offices are connected to offices of higher rank, direct interoffice trunks can be used to link any two offices when warranted by the volume of traffic. The introduction of control switching points and tandem offices has made possible a substantial reduction in the number of direct interoffice trunks needed to handle all calls in a given direction with a specified quality of service. A quality of service can be maintained wherein no more than 1 percent of the calls are blocked by busy circuits.

An international telephone network is farmed by all international offices, transit centers for international, including intercontinental calls, and interconnecting communications lines.

Development work on telephone networks is geared toward increasing the level of automation in setting up connections at central offices and switching points and introducing automatic central offices and control switching points that do not need constant maintenance. These offices and switching points will be either electronic or quasi-electronic. With the latter, the control apparatus is made up of electronic components, and the switching of communications lines is done by small, high-speed telephone relays, such as hermetic contacts. Work is also being done on developing adaptive automatic control systems for telephone networks. These systems include devices for representing, monitoring, and correcting the condition of a network; the devices, acting upon information (the dialed number) received from the caller, search the network for the optimum route of setting up the connection. Microelectronics and electronic control computers are being used in telephone equipment. The telephone network in the USSR is being developed as part of the Integrated Automatic Communications System.