the part of a telescope on which the optical tube rests. The mounting allows the telescope to be aimed at the region of the sky to be observed, ensures its stability in position, and provides for the convenient performance of various types of observations. The main parts of a telescope mounting are the base (or column), two mutually perpendicular axes for rotating the telescope tube, driving gears, and a system for reading off the angles of rotation. A distinction is made between equatorial (or parallactic) mountings and azimuthal (or horizontal) mountings (see Figure 1). 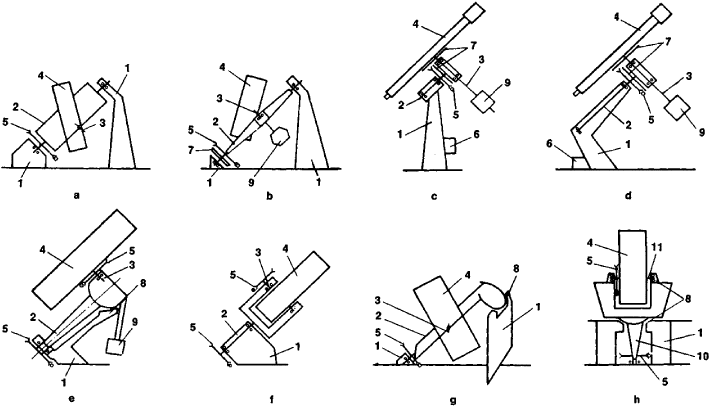 supports the tube, lies in the horizontal plane. The first axis is for rotation of the telescope about the azimuth, and the second is for altitude (zenith distance). Continuous and precise rotations about both axes simultaneously, with speeds that change in a complex fashion, are necessary for observation of stars with an azimuthally mounted telescope.

More complex mounting designs are used in astronomical instruments designed for certain special operations. In instruments designed for photographic observation of artificial earth satellites (satellite cameras) a three-axis or four-axis mounting is used; this makes possible the tracking of a rapidly moving satellite by rotating the camera about only one “orbital” axis (the positions of the remaining axes are set in advance and are only corrected during the observations).

Feedback
Flashcards & Bookmarks ?
Please log in or register to use Flashcards and Bookmarks. You can also log in with
Flashcards ?
My bookmarks ?
+ Add current page to bookmarks
Mentioned in ?
References in periodicals archive ?
A significant 60 percent of that, or 3,000 tons, will be the weight of the total moving mass inside the dome, which will include (http://www.eso.org/public/teles-instr/elt/) the telescope mounting and tube structure.
World's Largest Telescope Now Under Construction
The latter will feed a guide-eyepiece and two guest-eyepieces simultaneously and is served by an access-platform large enough to accommodate several observers, integrated in the telescope mounting itself: it was these design features which dictated the choice of altazimuth mounting geometry.
First light for Hanwell 30-inch reflector
The first step in understanding a telescope mounting is to understand the motion of the sky.
Mastering polar alignment
For the telescope mounting, Chen turned to "high-temperature" superconductors that operate at around 100[degrees] Kelvin, which is typical of the lunar night.
An ultralight lunar telescope