[′tel·ə‚vizh·ən ri‚sē·vər]
(electronics)
A receiver that converts incoming television signals into the original scenes along with the associated sounds. Also known as television set.
McGraw-Hill Dictionary of Scientific & Technical Terms, 6E, Copyright © 2003 by The McGraw-Hill Companies, Inc.
The following article is from The Great Soviet Encyclopedia (1979). It might be outdated or ideologically biased.

a radio receiver designed to amplify and convert the video and audio radio-frequency signals of a television broadcast that have been picked up by a television antenna; the receiver reproduces the visual image broadcast and the accompanying sound. Television receivers are designed for color or black-and-white operation; both nonportable and portable models are produced. Those manufactured in the USSR are capable of receiving signals from television stations transmitting in specifically assigned portions of the very-high-frequency (VHF) band (48.5–100 megahertz and 174–230 megahertz; 12 channels) and ultrahigh-frequency (UHF) band (470–638 megahertz; several tens of channels).

Television receivers must simultaneously amplify and convert video and audio radio-frequency signals. They are usually designed with a superheterodyne circuit, and versions differ in the methods used to extract and amplify the audio signal. The principal components of a television receiver are shown in Figure 1.

The scanning generators include horizontal and vertical scanning circuits that produce sawtooth currents in the horizontal and vertical scanning coils of the deflection system. The high voltage for feeding the second anode of the kinescope (a voltage of 21–25 kilovolts in color receivers) is derived from a special high-voltage winding of the line transformer or by rectifying pulses from the transformer; the voltage for the focusing electrode (approximately 5 kilovolts in a color television set) is similarly derived. In a color receiver, this circuit has transformers to correct pincushion distortion in the television raster.

The kinescope’s interface includes static and dynamic white balance controls, switches for extinguishing the electron guns, and regulators for focusing the beams. The demagnetizing circuit for a color kinescope creates a damped alternating current in a demagnetizing loop that circles the kinescope screen. The current demagnetizes the shadow mask and tube rim, which are made of steel.

The audio section consists of an amplifier for the difference frequency, which in the USSR is 6.5 megahertz, a frequency detector for the audio signal, and a low-frequency amplifier from which the audio signal is fed to a high-quality acoustical system, usually composed of several loudspeakers. The power-supply section converts mains voltage into the supply voltages for all components of the television set, including the kinescope and vacuum tube heaters. 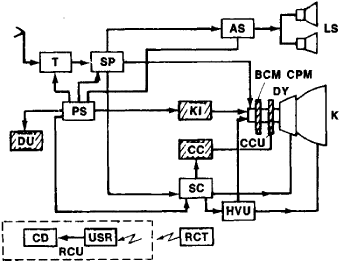 In the USSR television receivers are divided into four categories according to quality, screen size, and operating convenience. Categories one to three are nonportable receivers, including both consoles and table models, and class four are portable sets. Receivers are usually designed with subassembly blocks that make extensive use of printed wiring. Semiconductor devices and integrated circuits have supplanted receiving tubes in modern receivers. Development is proceeding on receivers with rectangular screens in the form of flat panels that use phosphors, liquid crystals, or other substances.

Various controls are usually mounted on the front panel of a television receiver. They include an on-off switch, a channel selector, a VHF-UHF switch (when separate channel selectors are provided for each band), and controls for adjusting image brightness, contrast, color saturation, hue, and audio volume and tone. The rear panel usually has a selector for manual or automatic tuning of the local oscillator and a tuning adjustment, a switch for the chrominance channel, and controls for adjusting horizontal and vertical scanning frequencies, for centering the raster, and for adjusting the horizontal and vertical raster linearity and size. Antenna inputs, headphone and tape outputs, and a switch for different power supply voltages are also on the rear panel.

For the viewer’s convenience, the gain, brightness, contrast, local oscillator frequency, horizontal scanning frequency and phase, and image size are regulated automatically. A remote-control transmitter permits the viewer to turn the receiver on and off, change channels, adjust the image brightness and contrast, and control the loudness of the sound from a distance. The transmitter radiates ultrasonic signals that are picked up in the television receiver’s remote-control unit. Signals are fed from the output of the remote-control unit to a control device, which produces control voltages that are fed to various points in the television receiver.

Feedback
Flashcards & Bookmarks ?
Please log in or register to use Flashcards and Bookmarks. You can also log in with
Flashcards ?
My bookmarks ?
+ Add current page to bookmarks
Mentioned in ?
References in periodicals archive ?
Illustrations and still photos of baseball action (but never actually television images) were common in print advertisements for television receivers. Never was the sport so important to the medium than in this first summer of television.
Baseball on television: the formative years, 1939-51. (Articles)
For television receivers in classrooms, a wireless remote control was the primary communication link to the IMDS system.
Video to the desktop and classrooms: the IUPUI IMDS project
NXP Semiconductors NV (Nasdaq:NXPI) announced on Thursday that KONKA Group Co Ltd, a Chinese TV set manufacturer in Shenzhen, has selected NXP's TDA18273 silicon tuner solution for its analogue and digital television receivers.
NXP Semiconductorsa[euro](tm) TDA18273 silicon tuner selected by KONKA in China for television receivers
Michelle Bowman, 43, of The Fleet, Redcar, fined pounds 50 with pounds 75 costs for using a colour television receiver without a licence.
Court in Brief
Recognized as the world leader and innovator of big screen and digital television receiver technology, MCEA develops audio and video products that lead the industry in performance, ease-of-use and system integration.
FIRST SHIPMENTS OF MITSUBISHI HDTV SYSTEMS SENT TO DEALERS
THE latest twist in the TV revolution was announced yesterday when Sky said its new high definition television receiver would cost almost pounds 300 to buy.
TV revolution will set you back pounds 300
The European Information, Communications and Consumer Electronics Technology Industry Association (EICTA) has announced that it is set to co-operate with major cable network operators to define a common digital television receiver specification for Europe.
JOINT STANDARD FOR DIGITAL TV IN THE PIPELINE
NORDIC BUSINESS REPORT-5 March 2002-Nokia introduces new digital television receiver (C)1994-2002 M2 COMMUNICATIONS LTD http://www.m2.com
Nokia introduces new digital television receiver
50 YEARS AGO: A Baird portable television receiver, the first of its kind in the world, is on view at the British Theatre Exhibition, at Bingley Hall, Birmingham.
THEME FOR THE DAY
Among the accomplishments he recalled with pride last week were helping to develop the world's first large-screen rectangular picture tube and solid-state television receiver; earning 13 patents and co-patents; increasing Motorola's market share, and, in the past 23 years at Matsushita, fostering dramatic increases in manufacturing facilities, productivity and sales.
Change at the top at Matsushita
DVB is currently developing an open second-generation digital television receiver architecture, the Multimedia Home Platform.
COMMUNICATION ON PARENTAL CONTROL OF TV BROADCASTING