(tāōtēwäkän`), ancient commercial and religious center in the central valley of Mexico, c.30 mi (48 km) NE of Mexico City. Once thought to be the great religious center of the ToltecToltec
, ancient civilization of Mexico. The name in Nahuatl means "master builders." The Toltec formed a warrior aristocracy that gained ascendancy in the Valley of Mexico c.A.D. 900 after the fall of Teotihuacán.
..... Click the link for more information. , it is now held to be the relic of an earlier civilization. Teotihuacán is the largest (c.7 sq mi/18.1 sq km) and most impressive urban site of ancient America. The Pyramid of the Sun, the tallest in Mexico, is 216 ft (65 m) high and covers approximately 10 acres (4 hectares) at the base; it dominates the symmetrical ground plan laid out in grid fashion along major thoroughfares, including the city's central axis—the Street of the Dead. Other buildings along this axis include the Pyramid of the Moon; the Citadel containing the Temple of Quetzalcoatl, so called because of its carvings of feathered serpents; the Temple of Agriculture; and the Quetzalpapalotl Palace.

The earliest cultural horizon at Teotihuacán dates to c.100 B.C. The culture flourished from about A.D. 300 to 900, undergoing tremendous expansion; it became the most populous city in the Americas at its height. Excavations have revealed large chambered structures resembling communal dwellings. The people of Teotihuacán brought sculpture, the art of carving exquisitely stylized stone masks, ceramic manufacture and decoration, and mural painting on walls to a high degree of refinement. The designs show a strong concern for cosmological matters, indicating the existence of a complex religious system.

More recent archaeological work at the site, as well as elsewhere in Mexico, has revealed that Teotihuacán was a commercial as well as a religious center. Craft specialization is evident in various parts of the city, and Teotihuacán influence is seen in such far-off places as the Guatemala highlands, the Maya lowlands, and the valley of Oaxaca. Some neighborhoods of the city seem to have been inhabited by groups of immigrants who retained their distinct ethnic identities. The political organization of Teotihuacán and its sphere of influence are unknown. 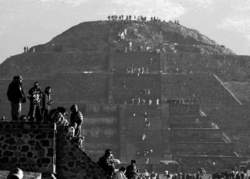 During the spring equinox, the ancient city of Teotihuacan draws Mexican pilgrims who believe they can receive spiritual energies here. The ancient Aztecs considered the city to be the home of their gods. Getty Images.

Teotihuacan was an ancient city in Mexico located some 18 miles from modern Mexico City. It was founded at the beginning of the Common Era, and by around 500 CE had a population in excess of 125,000. It was, in fact, the sixth largest city in the world at the time. The city was located in the Valley of Mexico between the surrounding mountains and Lake Texcoco. Because Lake Texcoco is a salt lake, the residents developed a sophisticated system for collecting rainwater.

Religion was an integral, even dominating, aspect of life in ancient Teotihuacan. A broad street that was named the Avenue of the Dead ran through the center of town and connected the major buildings. The Sun Pyramid was situated on the eastern edge of the Avenue of the Dead in the northern part of the city. In its final form, each side was more than 700 feet long at the base. The pyramid was a major ritual center, especially the cave under it. The cave was sacred to the god Tláloc, who was the god of rain. The Pyramid of the Sun was balanced by the Pyramid of the Moon found at the northern end of the Avenue of the Dead. It faced south toward the rest of the city, and at the plaza immediately in front of it was a space for religious gatherings. At the very center of the city was a large enclosed space that is calledthe Ciudadela and is approximately 1,300 feet square. The plaza could easily accommodate about 100,000 people. In the center of the city is the Feathered Serpent (Quetzalcóatl) Temple, the most well-known structure at Teotihuacan.

The exact nature of the religion practiced by the first inhabitants of the city is not well understood. They left no written records. What is known is that the city was abandoned around 750 CE, possibly after being overrun and sacked by invaders from the mountains. The city remained uninhabited for some five centuries after that. Then, around 1300, it was rediscovered by the Aztecs, who were in the process of settling the large valley. Though they did not repopulate the city, they were impressed by the structures and designated Teotihuacan as the home of their deities. Thus, the city became their sacred place to which they journeyed for various ritual occasions.

With the coming of the Spanish in the sixteenth century, Aztec culture was destroyed and Teotihuacan was again abandoned. While never really forgotten, it was neglected for centuries. Only at the beginning of the twentieth century did archeologists turn their attention to the site. As its importance was recognized, it was gradually excavated and brought back to some degree of its former splendor. It is now a tourist site rather than a religious center.

In recent years Teotihuacan has been reinvested with sacredness by leaders in the New Agemovement, who, having been alerted to its existence by author Peter Tompkins, have designated it an important spiritual site. They believe that the former residents recognized the natural flow of energies and that the city was located at its present site in recognition of those energies. Today, large gatherings of New Agers visit Teotihuacan during the equinox.

a city in ancient Mexico; one of the major centers of early class society in the Valley of Mexico, in what is now México State.

Teotihuacán apparently arose in the second century B.C. In the third through sixth centuries AD., its culture greatly influenced the culture of other peoples of Mexico and Guatemala. As a resuit of the invasion of tribes from the north, Teotihuacán was sacked and burned in the mid-seventh century A.D. In the Aztec period there was a small settlement located near the ruins of Teotihuacán.

Teotihuacán’s ruins encompass more than 15 sq km. The main architectural monuments are located near the straight Avenue of the Dead, at the northern end of which the following ruins have been preserved: the Moon Pyramid, with a complex of temple buildings at its base; the Temple of Agriculture, with frescoes; the Temple of Tlaloc; and the Citadel (the Temple of Quetzal-cóatl). To the east of the Avenue of the Dead is the Sun Pyramid.

Teotihuacán has an archaeological museum. Acolman, the location of the monastery of San Agustín (1539–60), which exhibits elements of the plateresque style, is located in the Teotihuacán valley.