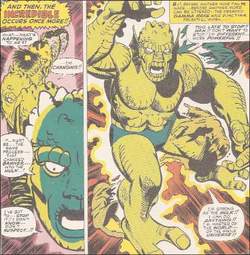 (pop culture)
Picture a gamma-spawned monstrosity mightier and more hideous than the Incredible Hulk— this is the Abomination. In Tales to Astonish #90 (1967), in the story “The Abomination!” by Stan Lee and Gil Kane, Slavic spy Emil Blonsky infiltrates a U.S. military base to filch the technology that transformed scientist Bruce Banner into the Hulk. He activates Banner's gamma device and is immersed in radiation, instantly transmogrifying into an emerald-hued grotesquerie capable of heaving 100 tons, shrugging off artillery fire, and hurdling two miles in a single bound. The Abomination is much more than the Hulk's evil twin. Banner's Hulk transformations are triggered by rage, after which he returns to his human self, but Blonsky's metamorphosis is permanent. While Banner's intelligence fades when he morphs into the Hulk, Blonsky's faculties are fully intact, although his judgment is routinely clouded by his unbridled hatred of his jade-jawed foe. The most discernable difference between the two is the supervillain's appearance: with his repulsive reptilian hide, Blonsky is unmistakably an Abomination. The supervillain's appellation was greeted with trepidation amid the Marvel Comics Bullpen, Stan Lee recalled in the trade paperback Bring on the Bad Guys (1976). “The Abomination is a lousy name for a villain!” scoffed one staffer. Lee stuck by his guns; “I had had it up to here with names like The Purple Potato or The Living Bedspread,” he wrote. In the character's debut, the behemoth's name was coined by Banner's girlfriend (and later, wife) Betty Ross, daughter of Hulk-hunter General “Thunderbolt” Ross, who gasped, “Who … or what … can that abomination be?” Fueled by ego and ire, the Abomination has repeatedly gone monster-to-monster with the Hulk. His menace has not been relegated solely to Earth: during a series of intergalactic adventures, the Abomination left such a trail of annihilation in his wake that he was dubbed “the Ravager of Worlds.” The Hulk's private world was ravaged by the Abomination's most decisive coup: his murder of Betty Ross Banner by gamma-radiation poisoning. The rancor between green-skinned goliaths has intensified over the years, with Banner engaging in a tryst with Blonsky's estranged wife, Nadia. The acrimonious Abomination's acclaim in the 2000s includes his own miniseries, deceptively titled Hulk: Destruction (2005), written by popular Hulk scribe Peter David. The Abomination's grudge match with “Ol' Greenskin” has also burst into non-comics venues. Voiced by Richard Moll of Night Court fame, the supervillain appeared in UPN's The Incredible Hulk animated series (1996–1999) and has been converted into action figures by Toy Biz. The young-adult novel The Incredible Hulk: Abominations by Jason Henderson (1997) features Blonsky, as does Game Boy Advance's The Incredible Hulk (2003). The Abomination is the rumored villain to appear in the sequel to the 2003 live-action Hulk movie. No matter the medium in which the Abomination/Hulk battles take place, heaven help the person—or city—that stands in their path when these titans clash.
The Supervillain Book: The Evil Side of Comics and Hollywood © 2006 Visible Ink Press®. All rights reserved.

Feedback
Flashcards & Bookmarks ?
Please log in or register to use Flashcards and Bookmarks. You can also log in with
Flashcards ?
My bookmarks ?
+ Add current page to bookmarks
Mentioned in ?
References in classic literature ?
In truth all that night had been the abomination of desolation to me.
View in context
The abomination of flowers, or representations of well-known objects of any kind, should not be endured within the limits of Christendom.
View in context
``We shall see that,'' said Front-de-B uf; ``for by the blessed rood, which is the abomination of thy accursed tribe, thou shalt feel the extremities of fire and steel!
View in context
Though it was faint and low, it moved me more profoundly than all that I had hitherto heard of the abominations behind the wall.
View in context
What her answer really said was: "If you lift a finger you'll drive me back: back to all the abominations you know of, and all the temptations you half guess." He understood it as clearly as if she had uttered the words, and the thought kept him anchored to his side of the table in a kind of moved and sacred submission.
View in context
In this section, I will present an example from Jeremy's reading of an issue of an Incredible Hulk comic book published by Marvel Comics (2005), entitled 'The Abomination!' I will focus on a particular juncture in his multimodal reading processes where multiple semiotic resources became visible as Jeremy discussed his reading with another student, Noel and me.
The role of semiotic resource complexes in emergent multimodal reading processes: insights from a young student's reading of a comic book
There's a choice of three great titles: The Abomination by Jonathan Holt, A is for Alibi by Sue Grafton or If You're Not The One by Jemma Forte.
FREE eBook
More importantly, however, is the abomination that is 35-year-old Elen's outfit.
El's bells.. what next?
I am of course talking about the abomination that is the "Get Carter" car park.
VENT YOUR SPLEEN
It will bring the property back to what it was originally, rather than the abomination it has become."
Pub bid 'will be benefit'
"Do they intend only to protest against the abomination, as is required, or do they intend to rally without restraint and with full devotion?" queried the broadcast.
Holy War against Gay Pride Parade
The papal apologists at The New York Times expressed surprise in their article on the encyclical that the Pope did not denounce the abomination of gay marriage.
Reading between the holy lines