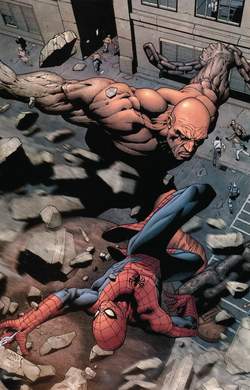 (pop culture)
Carl “Crusher” Creel was bad news before he joined the ranks of supervillainy as the Absorbing Man. When first seen in Stan Lee and Jack Kirby's “The Stronger I Am, the Sooner I Die” in Journey into Mystery #114 (1965), this kneecap-busting ruffian is serving a well-deserved stretch in the pokey. The Asgardian god of mischief Loki spikes Creel's drinking water with an herbal potion, imbuing the man-mountain with the ability to duplicate the physical assets of any object he touches. Smashing out of the slammer clad in nothing more than his prison-issue pants and a ball and chain, the Absorbing Man is manipulated by Loki into fighting Thor, and comes close to crowning the thunder god by replicating the might of both Thor and his enchanted hammer Mjolnir. Thor outwits Creel, however, as brainpower is the one attribute the pugnacious villain cannot seem to absorb. The Absorbing Man soon returned for a rematch with Thor, but was discharged into outer space by the deity-hero's father, the almighty Odin. Hightailing it back to Earth on a comet, Creel clashed with the Hulk in The Incredible Hulk #125 (1970): “I can add your might … to my own! And nobody can beat somebody who's always just a little bit stronger than they are … nobody!” he grunted. One of Marvel Comics' most durable supervillains, the Absorbing Man has frequently fought with Thor and the Hulk, and tried to squash almost every superhero from the Avengers to Spider-Man. The Absorbing Man prefers to mimic solids, most often pummeling heroes by becoming steel or stone. He can assimilate the properties of nonsolids, but many of those transformations—water, snow, gasses, light, and even cosmic energy—are unstable and beyond his control. His power has its limits: while Creel has expanded to skyscraper size, his attempt to engulf all of Earth's energy caused him to detonate (he got better). The Absorbing Man never strays too far from the old ball and chain. His jailhouse “souvenirs” share his absorption capacities, and Creel wields them like a club. He similarly stays close to his wife, the supervillainess Titania, whom he met in the maxiseries Marvel Super Heroes Secret Wars (1984–1985). After a crime-based courtship the couple wed in Avengers Unplugged #4 (1996), their ceremony crashed by She-Hulk and other heroes who misinterpreted the reason for their gathering. Mr. and Mrs. Creel have flirted with a life of lawfulness, but they find evil too beguiling to ignore. Jim Cummings voiced the Absorbing Man in the animated television series The Incredible Hulk (1996–1999), and several action figures of the villain have been produced. Nick Nolte's character of David Banner transmogrified into an unidentified Absorbing Man in the climax of the live-action blockbuster The Hulk (2003).
The Supervillain Book: The Evil Side of Comics and Hollywood © 2006 Visible Ink Press®. All rights reserved.