The Black Cat | Article about The Black Cat by The Free Dictionary
https://encyclopedia2.thefreedictionary.com/The+Black+Cat
Printer Friendly 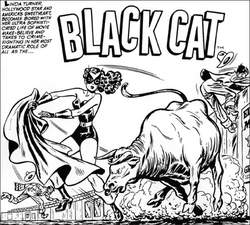 The Black Cat is responsible for several firsts in her medium: She starred in the first comic from the legendary Harvey Comics, Pocket Comics #1 (in August 1941), and was the first and longest-lived Harvey superhero, in addition to being the first major costumed superheroine to grace comic book pages.

Alfred Harvey had been an editor at Fox Comics when he decided to enter the comics market as a publisher himself, starting with Pocket Comics. As its name suggests, this was a digest-sized title, running up to one hundred pages, which Harvey packaged together with artist Joe Simon (of Captain America fame). The comic flew off the newsstands—but not in the way that Harvey expected! Its small size made it easy to steal, and light-fingered comics fans were carrying them off in droves. However, one of Harvey’s creations in that first issue, the Black Cat (drawn by Al Gabrielle), would prove to be much more successful.

The Black Cat’s alter ego, actress Linda Turner (named after real-life actresses Linda Darnell and Lana Turner) works for a tyrannical movie director called Garboil, whom she suspects is actually a Nazi Fifth-Columnist. Inspired by her cat’s instant dislike of Garboil, she decides to adopt the identity of a cat—a black cat—and dons a suitably feline costume of a low-cut black swimsuit, black pointed mask, gloves, and boots. Her origin story announces her quite pointedly: “Linda Turner, Hollywood Star and America’s Sweetheart, becomes bored with her ultra-sophisticated life of movie make-believe and takes to crime-fighting in her most dynamic role of all as the … BLACK CAT!”

Teaming up with pipe-smoking reporter Rick Horne, the Black Cat tracks down Garboil and his pals and smashes their spy ring. Horne soon becomes Turner’s constant companion, reporting on set from her many films while secretly harboring a crush for the Black Cat—never suspecting that she and Turner are one and the same. Although not superpowered in the traditional sense of the word, Turner’s years of stuntwork and Hollywood action scenes left her with an athletic physique and mastery of martial arts, making her a formidable opponent for any miscreant.

After four issues of Pocket Comics, Harvey switched “Hollywood’s Glamorous Detective Star” over to the more conventionally sized Speed Comics, where she appeared throughout World War II (from issues #17 in 1942 to issue #38 in 1945), as well as in occasional strips in All-New Comics. Those were creditable enough stories, drawn by the likes of Jill Elgin, Bob Powell, and Arturo Caseneuve, but it was the largely forgettable Captain Freedom who was usually the title’s cover star, and our heroine had to wait for the lifting of wartime paper restrictions and the creation of her own title before she could really come into her own. Black Cat #1 premiered in the summer of 1946 and, from issue #4, became one of the era’s most attractive strips with the addition of Lee Elias on art. British artist Elias was a great talent, working in the tradition of Milton Caniff (famed creator of newspaper strips Terry and the Pirates and Steve Canyon), and he added finesse, glamour, and a touch of humor to the feature.

The postwar years were characterized by a succession of crazes for such disparate genres as romance, crime, funny animals, and horror, which Al Harvey was determined to exploit. Seeing that Westerns were suddenly in vogue, Harvey temporarily changed the comic’s title to Black Cat Western, which saw the heroine swap her trademark motorcycle for a horse. That period lasted a mere four issues (#16-#19). Then, from issue #30, retaining the character’s name but not her presence, the comic became Black Cat Mystery, one of several Harvey horror comics, and poor old Linda Turner was banished into limbo. After several years of astonishingly gory horror tales (drawn by Elias, Warren Kremer, Bob Powell, and others), the incoming self-censorship body, the Comics Code Authority, prompted a sudden change of direction and the title briefly reverted once more to Black Cat Western, complete with its old star (for #54-#56 in 1955).

These were the last Black Cat adventures for decades, as the comic’s direction was changed back to “mystery” yet again when the mid-1950s superhero boom hoped for by Marvel, Magazine Enterprises, and others failed to materialize. After sporadic anthology issues of Black Cat Mystery in the late 1950s, the Black Cat herself reappeared to cash in on the 1960s superhero craze, but the three issues published then were reprints, which seemed out of place among the more sophisticated Marvel comics of that era.

Of course, Harvey Comics experienced enormous success throughout the 1950s, 1960s, and 1970s with its line of wholesome children’s favorites, such as Casper the Friendly Ghost, Little Dot, Sad Sack, and Richie Rich. Elements of the Harvey empire were sold off in the 1980s, resulting in the Casper and Richie Rich movies, while other properties, notably the Black Cat, stayed within the Harvey family. Under its Recollection imprint, Harvey brought out nine issues of The Original Black Cat (1988–1992), while its Lorne-Harvey imprint released Black Cat: The Origins in 1995. The latter title mixed vintage Elias reprints with stories featuring a new Black Cat: movie stunt double Kim Stone. In the comic, this new Black Cat dons her costume to star in a film about the original Black Cat. Indeed, there were rumors of a Black Cat feature film at the time, but the project proved to be a non-starter. Since the mid-1990s, no new Black Cat films or comics have appeared. —DAR

Feedback
Flashcards & Bookmarks ?
Please log in or register to use Flashcards and Bookmarks. You can also log in with
Flashcards ?
My bookmarks ?
+ Add current page to bookmarks
Mentioned in ?
References in classic literature ?
The king's curiosity, however, prevailing, I am sorry to say, even over his sound religious principles, induced him for this once to postpone the fulfilment of his vow until next morning, for the purpose and with the hope of hearing that night how it fared in the end with the black cat (a black cat, I think it was) and the rat.
The night having arrived, however, the lady Scheherazade not only put the finishing stroke to the black cat and the rat (the rat was blue) but before she well knew what she was about, found herself deep in the intricacies of a narration, having reference (if I am not altogether mistaken) to a pink horse (with green wings) that went, in a violent manner, by clockwork, and was wound up with an indigo key.
View in context
He was soon joined here by the black cat of which the voice had spoken, who came as usual to say good-morning to his master.
View in context
A Cat Heat Map for the ground travelled by the Black Cat at Everton.
The best reactions to Everton's Goodison Park pitch invader; The black cat encroached the pitch during Everton's game with Wolves
Throughout the year, the Black Cat team, based at Crosland Hill, went the extra mile and raised PS4,000 for patient care.
Fireworks company raise sparkling sum
Lurking deep within this creepy melange of bats, rats and witches hats -- can you track the black cat hidden in the haunted mansion?
There's a black cat hiding in this Halloween scene - can you spot it? The scene is loaded with bats, rats and witches hats flying around a haunted mansion, but the cat is slightly harder to spot; The scene is loaded with bats, rats and witches hats flying around a haunted mansion, but the cat is slightly harder to spot
If you would like to adopt them, call the branch on 0151 355 9813 or visit www.southwirral.cats.org.uk/southwirral/adopt-a-cat Send us pictures of your black .cat for our gallery at wirralcommunities@trinitymirror.com THE BLACK CAT MYTHS S.
MOGGIES IN NEED OF SOME LUCK / ... Charity stands up for the black cat this Hallowe'en
This appointment is part of the Black Cat Exploration & Production LLC's acquisition and Mason had been the CEO, owner and managing partner of Black Cat since 2010.
Worthington Energy Inc elects Anthony Mason as new chief executive officer
While the exact origins of the black cat superstition is not known, it may arise from a combination of circumstances over the centuries.
Sweet, not scary; Black cats' bum rap keeps them in shelters
Sometimes a redhead, sometimes a blonde, the Black Cat was a leggy beauty in buccaneer boots, gauntlets, cat mask, and a very impractical leotard.
No tame Kitty
This collection includes such ornate and well-known classics as "The Fall of the House of Usher." "The Pit and the Pendulum," "The Masque of the Red Death," and "The Cask of Amontillado." "The Raven," Poe's eerie and expertly crafted poem, is also here, as are "The Tell-Tale Heart," "Ligeia," "The Black Cat," "The Premature Burial," and "The Facts in the Case of M.
The Fall of the House of Usher; The Pit and the Pendulum, and Other Tales of Mystery and Imagination