The Brotherhood of Evil Mutants 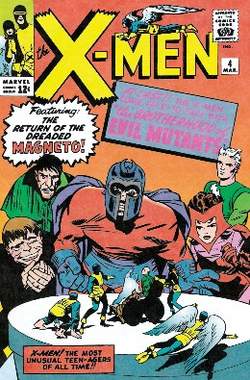 The Brotherhood of Evil Mutants

(pop culture)
It is not just individual superheroes who have evil counterparts; superhero teams have them, too. Hence, the opposite number of Marvel's mutant XMen is the Brotherhood of Evil Mutants, whose first incarnation was introduced by writer/editor Stan Lee and artist/co-plotter Jack Kirby in X-Men #4 (1964). Professor Charles Xavier founded the XMen to help bring about his dream of peaceful coexistence between mutants and “normal” humans. In contrast, each of the many versions of the Brotherhood has viewed non-superpowered humans as enemies. Though Lee and Kirby did not describe the team this way, each incarnation of the Brotherhood is a band of terrorists; hence, Lee and Kirby's Brotherhood foreshadows the real-life terrorist cells of later decades. The original Brotherhood of Evil Mutants debuted the same month as the Brotherhood of Evil, the adversaries of DC's Doom Patrol. But there is no evidence that “Doom Patrol” writer Arnold Drake had contact with Lee and Kirby at that time; the similarity is coincidental. The original Brotherhood of Evil Mutants was headed by Xavier's arch-foe Magneto, who controls magnetism, and included his pathetically submissive flunky, the Toad, who jumps like his namesake; Mastermind, who projects illusions; Quicksilver, who can run at superhuman speed; and his sister the Scarlet Witch, whose mutant “hex power” enables her to alter probability, causing unusual occurrences. The two siblings, whose real names were Pietro and Wanda Maximoff, aided Magneto because he had once rescued Wanda from a mob who thought she was a real witch. Neither Magneto, Pietro, nor Wanda knew at this time that Magneto was actually Wanda and Pietro's father. Magneto and this Brotherhood battled the XMen repeatedly, and even succeeded in temporarily conquering the (fictional) small Latin American nation of Santo Marco. Magneto finally overreached by attempting to force the Stranger, a superpowered being he assumed was a mutant, to join the Brotherhood. In actuality, the Stranger was a virtually omnipotent extraterrestrial, who turned Mastermind (temporarily) to stone and transported Magneto and the Toad to his homeworld as specimens of Earth mutants. Tired of Magneto's war with humanity, Quicksilver and the Scarlet Witch soon joined a superhero team, the Avengers. Later, Magneto and the Toad escaped to Earth, where Magneto reenlisted Quicksilver and the Scarlet Witch in his Brotherhood. This time, the Toad finally rebelled against his cruel master, and Quicksilver and the Scarlet Witch eventually returned to the Avengers. Magneto revived the Brotherhood in The Defenders #15–#16 (1974), with Mastermind rejoining. New members included three longstanding foes of the X-Men: the Blob, whose immense mass gives him superhuman strength and virtual invulnerability; Unus the Untouchable, who can surround himself with an impenetrable force field; and Lorelei, whose singing paralyzes the wills of men who hear her. In Captain America Annual #4 (1977), writer/artist Jack Kirby placed Magneto at the head of an otherwise all-new Brotherhood of Evil Mutants. Its roster included Burner, who could induce fires; the super-strong Lifter; Peeper (now deceased), whose large eyes gave him telescopic vision; Shocker, who emitted electrical blasts; and the reptilian Slither. After Magneto abandoned them, the team called themselves Mutant Force, and later, except for Slither, the Resistants. The shapeshifting mutant terrorist Mystique then usurped the name of the Brotherhood and organized her own version of the team, which writer Chris Claremont and artist/co-plotter John Byrne introduced in Uncanny X-Men #141 (1981). This team included the Blob; the blind Destiny, who could “see” the future; Avalanche, who could induce earthquakes in small areas; and Pyro, who could mentally control flames. In their first public appearance, Mystique's Brotherhood attempted to assassinate Senator Robert Kelly, whom they regarded as a foe of mutant rights, but were thwarted by the X-Men. Mystique brought her protégée Rogue into the Brotherhood, but Rogue soon defected to the X-Men. Under the name “Freedom Force,” Mystique's Brotherhood later became special operatives for the U.S. government. After Freedom Force collapsed, the Toad organized a new criminal Brotherhood, which included the Blob; Pyro; Phantazia, who could disrupt other superhumans' powers; and Sauron, a human transformed into a pterodactyl-like being. This team debuted in X-Force #5 (1991). Since the early 1990s there have been several short-lived Brotherhoods. In X-Factor #112 (1995) the Dark Beast founded a Brotherhood that would include Fatale, Random, Ever, and the heroes Aurora, X-Man, and Havok. Professor Xavier unsuccessfully tried to steer another Brotherhood (in Uncanny X-Men #363, 1999) including the Toad, the Blob, the Mimic (a nonmutant who could duplicate the superpowers of others), and the superstrong Post toward the straight and narrow. Then Mystique organized a new terrorist Brotherhood (debuting in X-Men #106, 2000) including Avalanche, the Blob, Post, the Toad, Sabretooth, Mastermind II (the original's daughter), and new characters Sabre and Crimson Commando II (who are successors to two former members of Freedom Force). Mystique's new Brotherhood tried again to assassinate Senator Kelly but were thwarted by the dying Pyro. There was even a Brotherhood with entirely new members who starred in their own series (The Brotherhood, 2001–2002), but all the members were killed. In New X-Men #146 (2003), the mysterious Xorn, who impersonated Magneto, established a Brotherhood, mostly composed of young mutants, but recruited the Toad as well. Then, in X-Men #161 (2004), Black Tom Cassidy and Exodus, a follower of Magneto, set up a Brotherhood including Avalanche, Sabretooth, Mammomax, Nocturne, and another nonmutant, the Juggernaut, who turned against them. In today's more sophisticated comics, it seems unlikely that Magneto would have referred to Brotherhood members as “evil mutants,” unless he was being ironic. In Ultimate X-Men, an alternate version of X-Men continuity, the team is called the Brotherhood of Mutant Supremacy. In mainstream X-Men comics, X-Men: The Animated Series (1992–1997), the animated television series XMen: Evolution (2000–2003), and the first X-Men (2000) feature film, the group is simply named the Brotherhood of Mutants. The X-Men movie's Brotherhood is led by Magneto and includes Mystique, Sabretooth, and the Toad. In the second film, X2 (2003), Magneto may well be rebuilding his defeated Brotherhood, since he recruits Pyro to his side.
The Supervillain Book: The Evil Side of Comics and Hollywood © 2006 Visible Ink Press®. All rights reserved.

Feedback
Flashcards & Bookmarks ?
Please log in or register to use Flashcards and Bookmarks. You can also log in with
Flashcards ?
My bookmarks ?
+ Add current page to bookmarks
Mentioned in ?
References in periodicals archive ?
The daughter of Magneto and sister to Quicksilver, she was originally on the side of the Brotherhood of Evil Mutants in the comics, but she saw sense.
Best female superheroes of all time ranked - our 15 favourites; The best female superheroes of DC and Marvel comics and movies ranked - our favourite 15 characters for International Women's Day
Quicksilver joined the Avengers when they escaped the Brotherhood of Evil Mutants as Magneto was abducted from Earth in order to atone for their past sins, (http://comicsalliance.com/quicksilver-marvel-fox-x-men-avengers-ultron-evan-peters-aaron-taylor-johnso/) according to Comics Alliance.
'X-Men: Days of Future Past' Quicksilver: 5 Things to Know About the Silver-haired Mutant
(13) While Magneto organized the Brotherhood of Evil Mutants to overthrow humankind, Dr.
X-Men as J Men: the Jewish subtext of a comic book movie